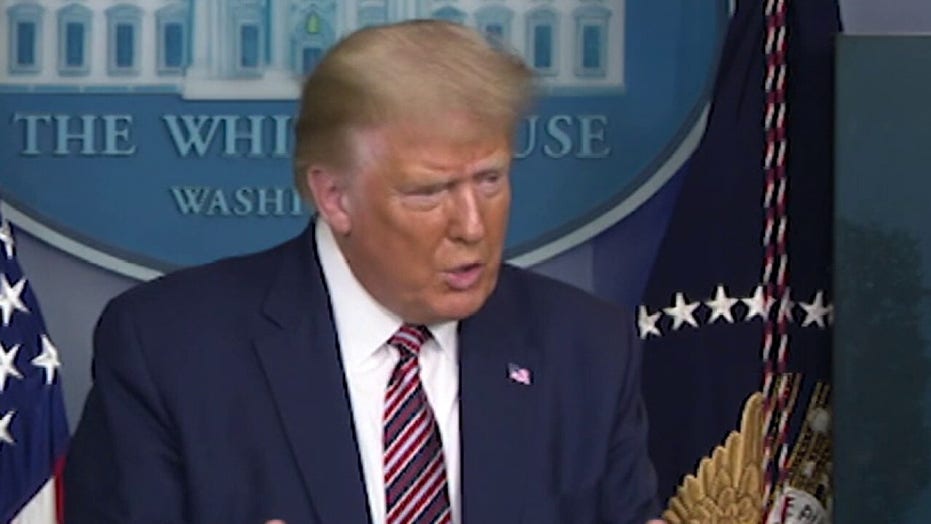 What effect will the report have on voters; Fox News senior politics editor Chris Stirewalt reacts on ‘America’s Newsroom.’

The report – which Trump labeled “fake news” – details how the president didn’t pay federal income taxes in 10 of the past 15 years.

Just a few hours after the release of the report on Sunday,  the former vice president’s campaign started selling merchandise – T-shirts, buttons, and stickers – that say “I paid more income taxes than Donald Trump.”

And Biden’s campaign also quickly posted a video on Twitter that compares how much in taxes Americans such as teachers, firefighters and nurses typically pay compared to the president.

As of Monday early evening, the video had more than 3.4 million views on Twitter. The former vice president’s campaign on Monday also spotlighted a tax calculator, tweeting “How much more did you pay in taxes than President Trump? Head to http://JoeBiden.com/TrumpTaxes to find out.”

The president – holding a press conference less than an hour after the story broke – lambasted the report, saying “It's fake news, it’s totally made up.”

According to the New York Times report, Trump, who has fiercely guarded his tax filings and is the only president in modern times not to make them public, paid $750 in taxes to the federal government the year he was elected and $750 again his first year in office.

The disclosure, which the Times said comes from tax return data extending over two decades, comes at a pivotal moment ahead of the first presidential debate Tuesday and during a combustible, divisive election.

Trump, whose net worth is claimed to be in the billions, denied that he paid such a small amount in taxes.

A lawyer for the Trump Organization, Alan Garten, also denied to the New York Times that the president paid such a small amount of taxes – saying in a statement obtained by Fox News that Trump "has paid tens of millions of dollars in personal taxes to the federal government, including paying millions in personal taxes since announcing his candidacy in 2015.”

“The New York Times’ story is riddled with gross inaccuracies. Over the past decade the President has paid tens of millions of dollars in personal taxes to the federal government," Garten said. "While we tried to explain this to the Times, they refused to listen and rejected our repeated request that they show us any of the documentation they purport to be relying on to substantiate their claims."

He added: "Obviously this is just part of the Times’ ongoing smear campaign in the run up to the election.”

The president on Monday continued to fire back at the report.

“The Fake News Media, just like Election time 2016, is bringing up my Taxes & all sorts of other nonsense with illegally obtained information & only bad intent. I paid many millions of dollars in taxes but was entitled, like everyone else, to depreciation & tax credits…..” Trump wrote in a series of tweets.

The firestorm over the report continued on Monday.

Sen. Graham, powerful Trump ally, may be 'in trouble' with reelection in South Carolina

Latest Posts
Stocks making the biggest moves after hours: Microsoft, First Solar, FireEye & more
US stocks close mixed as tech surge battles against industrial sell-off | Currency News | Financial and Business News
Harley-Davidson launching new company for retro bike
Netflix Q3 Earnings, Subscriber Additions Miss Estimates
Twitter's Jack Dorsey to warn 'eroding' Section 230 could 'collapse' Internet communication
Recent Posts
This website uses cookies to improve your user experience and to provide you with advertisements that are relevant to your interests. By continuing to browse the site you are agreeing to our use of cookies.Ok