Former Vice President Joe Biden, speaking publicly for the first time about President Trump’s controversial announcement Monday that he was taking hydroxychloroquine to prevent coronavirus infection, reacted, as many Americans did, with bafflement.

“It’s like saying maybe if you inject Clorox into your blood it may cure you,” Biden said at a Yahoo News town hall on COVID-19 and food insecurity, where he was joined by celebrity chef and anti-hunger activist José Andrés. “C’mon, man! What is he doing? What in God’s name is he doing?”

At the White House on Monday, Trump surprised reporters by announcing that he was taking the drug despite the absence of proof that it is useful in treating or preventing coronavirus infection.

“I’m taking it, hydroxychloroquine, right now, yeah,” Trump said. “Couple of weeks ago, I started taking it. Because I think it’s good, I hear a lot of good stories. And if it’s not good, I’ll tell you right. I’m not going to get hurt by it.”

Hydroxychloroquine, taken together with the antibiotic azithromycin, appeared to show promise in a limited, non-peer-reviewed study conducted in France on patients hospitalized with COVID-19. The regimen has been regularly promoted on Fox News and Trump himself spoke about it as a “game changer” in the fight against the coronavirus, But subsequent trials showed that the drug offered no benefits to patients, and even posed serious health risks.

Biden painted the decision to take the drug, which the FDA has approved to treat lupus and as a prophylactic for malaria, as irresponsible. 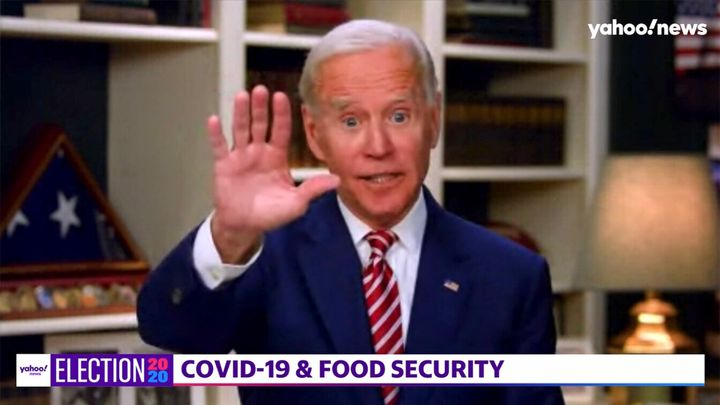 “The words of a president matter,” Biden said, adding, “You heard the vice president today or yesterday say ‘I’m not using it. I’m not using it.’ The vice president of the United States. Look, this is absolutely irresponsible. There’s no serious medical person out there saying to use that drug. It’s counterproductive. It’s not going to help, but the president, he decided that’s an answer.”

Trump’s White House doctor Sean Conley, released a statement Monday night in which he said that he and the president had spoken about taking the drug.

“After numerous discussions he and I had regarding the evidence for and against hydroxychloroquine, we concluded the potential benefit from treatment outweighed the relative risks,” Conley said. His statement didn’t say what evidence of a “potential benefit” he had relied upon to reach that conclusion, and did not specify the dosage, or even confirm that he had prescribed it for the president.

Biden said he believed that Trump was setting a bad example for the country, given the risks posed by taking hydroxychloroquine.

“Look at the studies that have been done. It does much more harm than good. This is totally irresponsible,” Biden said.

Click here for the latest coronavirus news and updates. According to experts, people over 60 and those who are immunocompromised continue to be the most at risk. If you have questions, please refer to the CDC’s and WHO’s resource guides.