Record profits, cash flows, margins and dividends and essentially no net debt. BHP is in a tremendously strong position and Mike Henry has lots of options.

The record underlying profit of $US23.8 billion  ($33.9 billion) came in yet another year of fundamental change for the group, with BHP merging its petroleum business into Woodside and offloading most of its energy coal assets to create a smaller but less carbon-intensive portfolio. 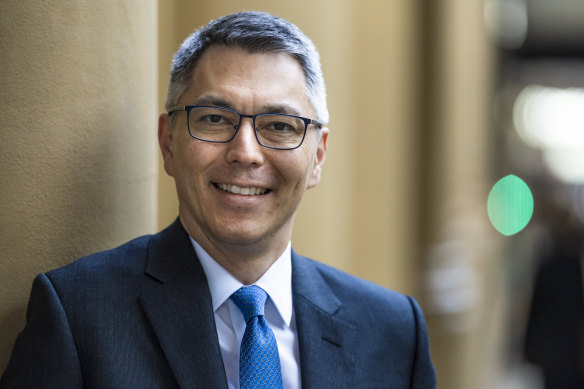 The continuing asset base, however, is high-returning – it achieved record earnings before interest, tax, depreciation and amortisation (EBITDA) margins of 65 per cent and an overall return on capital employed of 48.7 per cent – and is a powerful cash machine. It generated record free cash flows of $US24.3 billion.

That enabled BHP to continue to shower shareholders with cash of their own, distributing annual dividends totalling almost $US9 billion with a payout ratio of 77 per cent, excluding the Woodside deal-related’s fully-franked $US19.6 billion in specie dividend.

The number that stood out within the raft of impressive numbers and which underscores the extent to which a decade of strict financial disciplines has opened up options for Henry to exercise, however, is the net debt of only $US333 million.

That gives BHP a gearing ratio at balance date of only 0.7 per cent, well below its already-conservative target range for net debt of $US5 billion to $US15 billion.

It also provides a context for BHP’s $US5.8 billion bid for Oz Minerals. BHP has an underutilised balance sheet and the capacity, albeit not the necessity, to deploy it via acquisitions.

Henry describes Oz Minerals as a “nice to have” rather than a “must have” and showed, when he walked away from a protracted tussle with “Twiggy” Forrest for control of Canada’s Noront Resources last year, that he has a disciplined approach to mergers and acquisitions.

OZ Minerals has rejected the offer and so far refused to engage with BHP, which sees significant synergies between its South Australia copper-gold-uranium and West Australian nickel operations and Oz Minerals’ copper and nickel assets in those regions.

BHP still has scars from its overpriced and ultimately costly share oil acquisition splurge in the US a decade ago. Henry won’t overpay to get access to Oz Minerals’ assets and those synergies.

BHP is pinning its faith in a volatile global environment – one in which tighter monetary policies threaten global growth – on China stabilising and underpinning demand for commodities this financial year.Credit:AP

Even if the bid were to succeed, BHP would still have a lot of latent balance sheet capacity, even with its conservative gearing targets.

It could use it for more returns to shareholders via share buy-backs or special dividends, or to expand via either M&A or expansion of its existing operations. In all likelihood it will be a mix of all of the above.

Henry has already signalled that BHP’s capital and exploration expenditures are going to increase significantly.

In the last financial year it invested $US6.1 billion in its existing portfolio. This financial year it expects to spend $US7.6 billion. In the 2024 financial year its forecast is for $US9 billion of capex and exploration spending and beyond that an average of $US10 billion as the group ramps up its organic growth rate. It’s also putting together a portfolio of investments to early-stage exploration and developments that are focused on copper and nickel deposits.

The Jansen potash project will come online in the middle of the decade and BHP is already considering whether to accelerate the second, higher-returning stage of what could be a four-stage project. BHP is also studying the potential for an expansion of its West Australian iron ore business’ capacity from 290 million tonnes a year to 330 million tonnes.

Even without M&A activity, therefore, there are several potential large and smaller-scale drivers of growth in the group’s pipeline. Jansen, because it adds diversity to a portfolio that is less diverse after the loss of the petroleum business and most of the group’s thermal coal assets, is a particularly important, portfolio-reshaping, project.

Within the latest result there were some challenges. COVID-19-related costs and disruptions, the South Flank ramp up and higher diesel and electricity costs impacted operations. Unit costs were 13 per cent higher across the portfolio.

In the WA iron ore business C1 costs (excluding royalties and capital costs) rose from $US12.98 a tonne to $US15.05 a tonne but, in an inflationary environment, BHP says it is still the world’s lowest-cost iron ore miner.

BHP has an underutilised balance sheet and the capacity, albeit not the necessity, to deploy it via acquisitions.

The prospect of enhanced margins for those at the low end of cost curves is enhanced in an environment where inflation rates have risen globally and cost curves in their sectors are lifting and steepening.

BHP is pinning its faith in a volatile global environment – one in which tighter monetary policies threaten global growth – on China stabilising and underpinning demand for commodities this financial year.

China’s harsh responses to COVID – large-scale lockdowns – and an ongoing and threatening property crisis have reduced its economic growth to near-zero levels this year despite some modest stimulatory measures.

This week’s unexpected reduction in the People’s Bank of China’s key interest rates amid worse than expected economic data underscores its challenges – and, in a critical year for Xi Jinping as he seeks his unprecedented third term as Communist Party leader and China’s president, its likely response. Beijing will do whatever it can to maintain some level of growth.

The combination of a more focused portfolio of large-scale operations at the low end of their sector’s cost curves, disciplined capital allocation and a pristine, almost completely unleveraged, balance sheet provides some insurance against China failing to arrest the sharp downturn in its economy.

If China’s demand for commodities did shrivel and caused commodity prices to tumble, that financial strength could also provide Henry with some counter-cyclical M&A opportunities. It might even drive Oz Minerals into his arms.