When Mike Henry became BHP’s chief executive just over a year ago he detailed his bucket list of aspirations for the group. In the December half he ticked off most of them.

From his predecessor, Andrew Mackenzie, Henry inherited an almost obsessive organisational focus on productivity and a very disciplined framework for capital management. He’s maintained those and added even greater intensity to the concentration on efficiency, operational reliability and safety.

On any assessment, albeit aided by the big spikes in iron ore and copper prices, BHP delivered on those objectives in the half year. That has generated another deluge of cash for shareholders as the strong disciplines provided by the group’s stringent capital management framework resulted in a 55 per cent increase in the interim dividend. 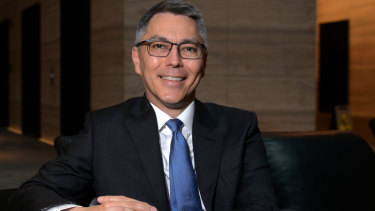 BHP chief Mike Henry has delivered a 55 per cent increase in the interim dividend.Credit:Bloomberg

Record iron ore production in the Pilbara and copper concentrator throughput at Escondida ticked off the most critical boxes of operational reliability, helping to produce an increase in production volumes that, pouring over controllable costs that were flat, added $US241 million ($308 million) to group earnings before interest, tax, depreciation and amortisation (EBITDA).

Increased volumes and flat costs represent increased reliability and productivity and another couple of ticks on the Henry scorecard, along with a clean sheet in terms of fatalities.

The bottom line for BHP was a 16 per cent increase in attributable profit, to $US6 billion, with 85 per cent, or $US5.1 billion, of that flowing to BHP shareholders through the increased dividend even as BHP reduced net debt from $US12.7 billion in the previous corresponding period to $US11.8 billion.

The result was powered by the surge in iron ore prices in particular – BHP’s average realised price was $US103.70 a tonne versus $US78.30 a tonne in the same half of the 2020 financial year – but it was the combination of cost discipline and record production that leveraged the group’s increased volumes into a 21 per cent increase in underlying EBITDA, to $US14.68 billion and a 39 per cent increase, to $US5.2 billion, in its free cash flow.

Given that iron ore and oil have been trading more than 50 per cent above the prices BHP realised in the first half and copper about 16 per cent higher, BHP has established (China and the pandemic willing) a very strong platform to launch into the June half.

The most obvious headwind, other than the impact of China’s trade sanctions on BHP’s coal business and the continuing costs of maintaining a safe workplace in the face of the pandemic, is currency.

The Australian dollar – and BHP’s cost base is predominantly in Australian dollars – reduced BHP’s EBITDA by about $US711 million in the December half as it strengthened from about US69 cents at the start of the half to just under US77 cents at December 31. It’s now trading a fraction below US78 cents. Each one cent movement in the dollar has a $US132 impact on BHP’s EBITDA.

The flip side of the impact of a stronger Australian dollar, relative to the US dollar, on costs is that a weaker US dollar makes commodities (priced in US dollars) cheaper for end-users and therefore helps increase demand and, from BHP’s perspective, volumes.

In supply-constrained markets like iron ore – and BHP seems confident that China’s demand will hold up for the next few years at least, while it will take time for Brazil to rebuild its supply after Vale’s series of dam failures – US dollar weakness can, as the interim performance demonstrated, result in both increased demand for Australian ore and higher prices.

The strength of China’s recovery from the pandemic and its impact on iron ore and copper demand and prices enabled BHP to continue what has developed into a bonanza for its shareholders.

The US101¢ a share interim dividend (US65¢ previously) produces a record $US5.1 billion payout to shareholders and takes the total returns to shareholders over the past three years to $US30 billion.

The torrents of cash will likely continue to cascade largely untouched through the group and into the pockets of its shareholders.

While the pandemic generates an asterisk over the outlook even as the vaccines roll out, the major economies are well past their nadirs and global demand for commodities, including for oil and coal (the two laggards in the BHP portfolio) ought to strengthen.

With BHP committed to strong capital discipline, and with a balance sheet that is now very conservative, it is unlikely that the torrents of cash flowing through the group will be diverted to massive increases in its capital expenditures. The group and its peers learned painful and lasting lessons from their profligacy during the boom years for resources that followed the financial crisis.

That suggests – as long as demand and prices hold up – that the torrents of cash will continue to cascade largely untouched through the group and into the pockets of its shareholders.

Latest Posts
Future Mars trips will require huge shifts in spacecraft propulsion, with NASA and startups working on a fix
Video captures the moment a missile fired at the capital of Saudi Arabia by Iran-backed fighters is intercepted
MSNBC’s Chris Hayes: CPAC Reveals A GOP Fixated On ‘Cultural Grievance’ Over Policy
The US just authorized a 3rd coronavirus shot, adding a convenient, single-dose option to boost the rollout
Roger Stone, at CPAC, says he'd back Trump in 2024 but warns Dems, media will try to 'bury' accomplishments
Recent Posts