For nearly a decade BHP has been single-mindedly focused on driving operational leverage into its portfolio through an intense focus on costs and productivity. Its efforts almost all came together in an exceptionally strong first-half result.

The headline increase of 57 per cent in underlying earnings to $US9.7 billion ($13.6 billion) and the latest cash deluge for shareholders distracted from two remarkable metrics that underscore how much leverage has been built into the group’s performance by the years of grinding attention to detail. 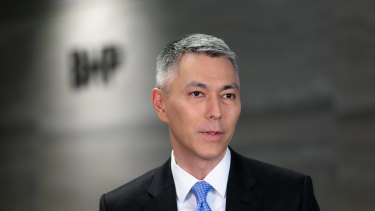 BHP generated an extraordinary group EBITDA (earnings before interest, tax, depreciation and amortisation) margin of 64 per cent in the half and an equally impressive return on capital employed of 43 per cent in a demonstration of that inherent leverage.

The result came despite the cost pressures that have resulted from the pandemic. BHP was able to get near-maximum value from a very favourable pricing environment for its key commodities – iron ore, copper, coal and oil and gas.

The increased prices added $US5.7 billion to underlying EBITDA, although they were partially offset by lower copper volumes as a result of lower grades at Escondida and maintenance-impacted volumes at Olympic Dam and an increase in costs of more than $US1 billion.

Some of the cost increases relate to the direct impact of the pandemic on BHP – the cost of social distancing and hygiene measures, for instance – while others reflect the flow-on effects of COVID on the group’s supply chain and input costs.

The pandemic-related costs, direct and indirect, will continue to weigh on BHP’s (and others’) cost base for at least the rest of this year but could, in the sweep of BHP’s contemporary history, be regarded as aberrational and temporary.

The underlying cost discipline, when combined with the very strong pricing environment in the half, produced a flood of cash, with operating cash flows of $US11.5 billion and free cash flow of $US8.5 billion.

With net debt of only $US6.1 billion, BHP has been able to declare a record interim dividend of $US1.50 a share that will absorb $US7.6 billion of its cash in a continuation of the $US22 billion cash bonanza its shareholders will have experienced in the past year and a half.

The multibillion-dollar question is whether BHP can sustain the pace set in the December half, with the pandemic still a source of disruption and costs and China’s economy slowing quite dramatically.

The latest result was swollen by price increases for all its major commodities, with iron ore prices up 9 per cent, copper and nickel 30 per cent, metallurgical and thermal coal up almost 200 per cent and oil prices nearly 80 per cent.

If anything the overall pricing environment is even more robust amid a tightening global commodities and energy supply environment.

Iron ore, BHP’s key commodity, isn’t trading at last year’s peaks but at around $US150 a tonne is way above the December half average of about $US113 a tonne.

The multibillion-dollar question is whether BHP can sustain the pace set in the December half, with the pandemic still a source of disruption and costs and China’s economy slowing quite dramatically.

Iron ore is the commodity most impacted by China’s economy, which has slowed markedly as a result of its property sector’s woes, the impact on confidence and activity of its crackdowns on its more entrepreneurial companies and its authorities’ zero tolerance approach to COVID.

With China responding to the slowdown with its lever of first resort – measures to stimulate investment in infrastructure, property and plants – there ought, however, to be a floor under the iron ore price at relatively high levels for at least the remainder of this year.

Oil prices are at their highest since 2014 and closing in on $US100 a barrel amid the escalating tensions around Ukraine. Coal prices soared in the half, driving the division’s result from a $US600 million loss at the earnings before interest and tax level to a $2.2 billion positive contribution. Copper has flatlined but the prices are still strong by historical standards.

BHP shareholders might look at the petroleum result – a turnaround at the EBIT level from a loss of $US108 million to a profit of $US2 billion – and the near-term outlook for oil and gas prices and question the timing and terms of last year’s decision to merge BHP’s business with Woodside’s.

They will, of course, maintain an exposure to 48 per cent of the business’ earnings and prospects, share in the $US4 billion of synergies and get the same exposure to Woodside’s gas portfolio if the deal is completed, as BHP expects, in the middle of this year. 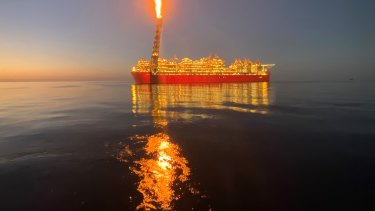 LNG prices have soared due to the ongoing Ukraine crisis.Credit:Boiling Cold

LNG prices have soared amid a global gas shortage that has been exacerbated by Russia’s throttling of gas volumes to Europe as part of its maneuvering around Ukraine and by the impact of COVID on global production and logistics.

Even without petroleum, BHP will generate torrents of cash even in a less buoyant price environment because of its disciplines on costs and its allocation of capital.

With a pristine and under-leveraged balance sheet – the net debt of $US6.1 billion is a long way short of its new target range for net debt of $US5 billion to $US15 billion – chief executive Mike Henry and his board have a lot of options if they choose to exercise them.

The biggest and most expensive project underway is the massive Jansen potash project in Canada but that’s still at least five years away from coming online.

There’s scope for acquisitions and some speculation that it’s looking (although its experiences in the US shale sector last decade have made it more cautious about overpaying for access to resources) or for doing what BHP has done so profusely in recent years and giving the surplus cash – fully franked – back to its appreciative shareholders.

Trump asks if Democrats will launch an investigation into whether 'Russia, Russia, Russia' helped Sanders win the Nevada Caucus