If the trade conflict between the US and China last year weren’t by itself sufficient to reshape global supply chains, the coronavirus pandemic has almost certainly ensured that the dramatic increases in global trade that occurred over the past few decades will be to some extent unwound.

A recent McKinsey Global Institute study estimated that between 16 and 26 per cent of exports – or about a quarter of companies’ global sourcing, worth between $US2.9 trillion and $US4.6 trillion ($4.1 trillion and $6.4 trillion) in 2018 dollars – could be "in play." By that it means production of those goods could revert to domestic production or be shifted to new locations. 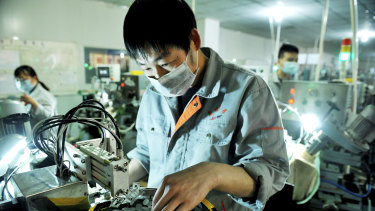 Chinese factories are restarting production as the country emerges from its coronavirus shutdown.Credit:AP

Boston Consulting Group (BCG) produced its own analysis late last month, estimating that global trade would fall by $3 trillion this year (from $18 trillion to $15 trillion) and won’t return to 2019 levels until 2023.

The future shape of global trade and globalisation matters. It’s important to the global economy and geopolitical stability, both of which have been unsettled by, initially, Donald Trump’s trade wars on everyone, but particularly China, then the coronavirus and, more recently, a more significant and wider deterioration in the US-China relationship.

It matters particularly for Australia, given how trade-exposed this economy is.

BCG said that over the past 20 years, a period when globalisation was accelerating, manufacturing as a share of Australian GDP had fallen from 13.8 per cent to 5.6 per cent, making Australian companies and consumers reliant on imports for value-added goods in almost every sector and dependent on a relatively small number of global supplies.

It described Australia as the "last stop" on global supply chains, which perhaps explains which the impact of the pandemic on supply hit so quickly and so hard.

It is obvious that, after the experience of the pandemic, countries, including Australia, will seek greater security for their supplies of pharmaceutical products and medical equipment and other health and health sector-related supplies.

The increasing intensity of the tit-for-tat conflict between the US and China may be a pre-election phenomenon – Donald Trump is trying to make his aggression towards China, which he justifies on national security grounds as well as a response to the coronavirus’ origins, an election issue – but is unlikely to abate regardless of the outcome in November.

As a US ally and part of a loose coalition of Western economies, Australia, so dependent on China as a customer for our resources and a producer of manufactured goods, has more at stake than most in the impacts of the pandemic and the geopolitical tensions on global trade flows and the shift in focus from the efficiency of "just in time" sourcing to supply chain resilience and national security.

Remaking those supply chains to diversify or "re-shore" the sources of supply will be disruptive and costly.

China isn’t immune to those threats. 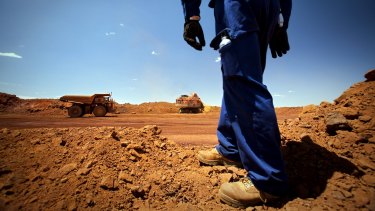 While China has reduced its dependence on Australia iron ore over the past decade, lifting Brazil’s share, its access to natural resources remains heavily concentrated. Australia still accounts for 59 per cent of its iron ore and concentrates supply.Credit:Nick Cubbin

While it has reduced its dependence on Australia iron ore over the past decade, lifting Brazil’s share, its access to natural resources remains heavily concentrated. Australia still accounts for 59 per cent of its iron ore and concentrates supply. It is also exposed to some technology imports, most notably computer chips, its biggest imported item. It imported $US312 billion of them in 2018.

Its role as the anchor point for much of the network of global supply chains had been changing. Its status as a low-cost producer was overtaken by others as it became wealthier and its own ambitions evolved towards more value-added activities and global technological leadership.

It is still, however, very exposed to global trade and the open markets for its products that existed before the tariff war with the US and the pandemic. Its massive domestic market provides some insulation but shrinkage in global trade will hurt China as much, if not more, than any other major economy.

It isn’t surprising that there have already been significant responses to the vulnerabilities exposed by the pandemic. The US and Japan, for instance, have put billions of dollars of their stimulus packages into incentives for companies to re-shore production of critical products.

McKinsey says trade in goods had already fallen 13 per cent in the first three months of this year. It’s probably a reasonable conclusion that it has fallen further since, as the full impact of the pandemic became more evident.

It says that companies could shift a quarter of their global product sourcing within five years as they restructure their supplier networks, attributing the pressure to onshore or "near shore" or diversify supply chains to more than just the trade disputes and pandemic.

It says changes in the environment and the global economy are increasing the frequency and magnitude of shocks for companies, with 40 weather disasters last year generating damage of more than $US1 billion for each event.

Disruptions, it says, now occur on average every 3.7 years and the financial tolls of the most extreme events have been climbing. Companies, it says, can expect to lose, on average, more than 40 per cent of a year’s profits every decade.

The acceleration in the globalisation of trade over the past 30 years, when trade was growing at more than twice the rate of global GDP, stalled to some extent with the 2008 financial crisis and is now clearly decelerating or, more likely if the pandemic and trade issues do produce the anticipated re-engineering of supply chains, reversing.

The unwinding of a process that helped improved the lot of vast numbers of people in developing economies and made an increasing range of goods more affordable in advanced economies will have major implications for the global and individual economies, none of them obviously positive.

What are the different types of stocks?

Latest Posts
A third of American parents say they won't get their kids flu shots this year, despite the looming threat of flu season during COVID-19
$750. Again. And again. The amount Trump twice paid in taxes will be Biden's magic number during the first presidential debate, insiders say
Medical historian compares the coronavirus to the 1918 flu pandemic: Both were highly political
Biden campaign quickly capitalizes on Trump taxes report with T-shirts, buttons and stickers
Trump’s tax returns are what you get for having a tycoon in the White House
Recent Posts
This website uses cookies to improve your user experience and to provide you with advertisements that are relevant to your interests. By continuing to browse the site you are agreeing to our use of cookies.Ok