Australian gold miners Saracen and Northern Star have sealed a deal to merge into a $16 billion company that would rank in the ten biggest producers worldwide and expand output at a time of soaring gold prices.

The boards of Northern Star and smaller rival Saracen have unanimously recommended the tie-up, and on Tuesday said they had entered into a binding agreement to combine via a scheme of arrangement. In a pitch to shareholders, they said the deal would create a company with the scale and quality to attract gold-focused and generalist investors, and potential to target 2 million ounces of gold by 2027. 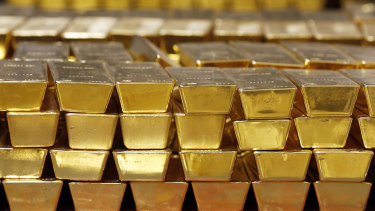 The traditional safe haven is flying high thanks to the coronavirus pandemic rattling world markets.Credit:AP

"This is one of the most logical and strategic merger-and-acquisition transactions the mining industry has seen," Saracen managing director Raleigh Finlayson said.

The savings, the synergies and growth opportunities it will generate make the transaction extremely compelling."

The deal comes as gold has proven one of this year's best-performing commodities, passing an all-time high of $US2075 an ounce, as the coronavirus pandemic causes investors to seek out out safe havens to protect their wealth from the effects of economic uncertainty and unprecedented global stimulus.

For Australia's gold miners, the yellow metal's 30 per cent price rally has provided a boost to profits. Since January, shares in Northern Star have surged by 23 per cent and Saracen shares by 57 per cent.

The proposed merger comes after Saracen and Northern Star have separately snapped up 50 per cent stakes in the Kalgoorlie Super Pit, one of the country's largest gold mines, and become joint-venture partners.

The companies on Tuesday said the merged entity would have "unrivalled presence" in the Western Australian Goldfields and place the iconic Kalgoorlie mine under single ownership for the first time in its 125-year history.