The number of flights to and from Australia has fallen by a fifth over the past six weeks as the coronavirus outbreak shatters travel demand and shapes up as the most serious threat to the global airline industry in over a decade.

Flights scheduled between Australia and China have dived 90 per cent, from 198 in the week starting January 20 to just 13 flights this week, according to figures from industry data firm OAG. 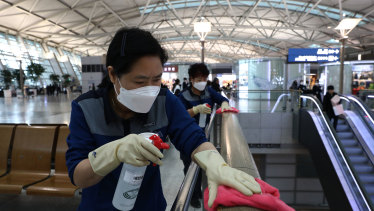 The data, provided to The Age and Sydney Morning Herald, shows the total number of scheduled international flights in and out of Australia falling from 4328 in the last week of January to 3518 this week – a decline of 18 per cent.

However, that also reflects the end of the peak holiday travel period, with the decline closer to 10 per cent on a year-on-year basis.

Australia barred non-residents who have been in China during the past 14 days from travelling to Australia on February 20 due to the COVID-19 outbreak, which is set to remain in place at least until March 7.

Meanwhile, both business travellers and holiday makers are cancelling travel plans in and around Asia, behaviour that threatens to spread to other regions as the virus does. 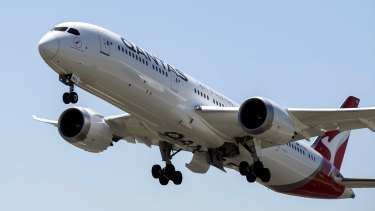 Qantas has suspended its flights to China. Credit:Getty

The International Air Transport Association has forecast global air traffic to fall 4.7 per cent this year because of the virus outbreak, which will be the first overall decline since the global financial crisis in 2008.

Peter Harbison, executive chairman of industry intelligence firm Centre for Aviation, said the virus could have a lasting impact on the Asia-Pacific airline market if it continues for much longer.

“Grounding fleets and that sort of thing is for an airline – which lives on cash flow – quite quickly deadly," he said.

“Several of the independent airlines will find it very hard if this continues for another month or two to even stay in the market.”

However government bailouts for struggling airlines was likely in China and South Korea, where low-cost carriers were particularly affected, he said.

South Korea now has the most COVID-19 cases outside of China, rising to more than 2000 on Friday. Jetstar suspended its recently launched Gold Coast to Seoul service on Thursday.

Some airlines are scrambling to cut airfares in an effort to fill their jets, with Air New Zealand on Friday selling tickets for as low as $66 on trans-Tasman flights, which have been hit with a collapse in demand from Chinese tourists.

Cancellations from mainland China are the biggest driver behind the fall in international capacity from Australia.

Qantas suspended its services from Sydney to Shanghai and Beijing on February 9. The airline had already decided to drop Sydney-Beijing from its network, from this week, before the virus outbreak.

Along with a fall in flights from China, OAG's data shows there has also been a sharp decline from Hong Kong, down 50 per cent to just 66 flights this week, with Cathay Pacific operating half as many services (36) and Virgin Australia pulling up stumps on flights from Melbourne from February 11.

Mr Harbison said airlines would also be vulnerable to a medium-term downturn in demand if the coronavirus crisis inflicts lasting damage on the global economic activity, making recovery from the current shock harder.

Qantas has said the virus will cost it up to $150 million, Virgin Australia and Air New Zealand expect it will cost up to $75 million each.

Elon Musk says a Tesla on Autopilot is 10 times less likely to crash than the average car, but experts say that stat is misleading