President Joe Biden is extremely unlikely to reverse his plan to wind down America’s 20-year mission in Afghanistan even as Taliban militants sweep through the country, massacring their opponents and forcing thousands of people to flee their homes. But Afghans argue that the U.S. still has considerable power to influence the Taliban even after most American troops leave the country: through international sanctions.

“While the Biden administration is resolved in leaving Afghanistan, it still can lead within international institutions. The Taliban will not respect its calls for peace without a show of force,” the group said in a Friday statement. “Without the U.S. to lead on sanctions, other nations will move to recognize the Taliban in efforts to stem an inevitable refugee crisis. This would be an absolute failing of the U.S. and the international community.”

Supporters of stronger sanctions hope they will convince the Taliban to slow its onslaught. When the ultraconservative armed movement previously ruled Afghanistan, it was a pariah. Combined with the toll of a civil war and the Taliban’s repression, that isolation made life miserable for most Afghans. In negotiating with Washington as they seek to regain power, Taliban representatives have repeatedly said they do not want to lose foreign support like the aid and expertise that Afghanistan has come to rely on since the U.S. invasion in 2001.

Tougher international restrictions on prominent Taliban members could show that countries will shun a Taliban-dominated government in Afghanistan if it violates rights standards and steamrolls other local players like pro-Western Afghans.

Without a global rebuke of the offensive, however, China or other powers like Iran might soon decide to acknowledge the Taliban as Afghanistan’s legitimate leader, killing the prospect of a multinational effort to limit the group’s brutality.

U.N. sanctions could affect prominent Taliban members who are based in Qatar, the small Persian Gulf state that hosted the talks leading to the U.S. withdrawal from Afghanistan, and other Taliban forces in Pakistan.

A senior Afghan lawmaker who recently fled a Taliban offensive explained their support for sanctions to HuffPost.

“Those who have committed atrocities have to be recognized internationally. They will understand that they will not receive legitimacy if they continue to do atrocities,” said the lawmaker, who requested anonymity for fear of Taliban retribution against family members who are still under the group’s rule. “The U.N., the U.S. and other countries who are involved in Afghanistan should understand that … with keeping quiet about the atrocities that the Taliban are doing, they are inviting the Taliban to do that.”

As the Taliban have taken over Afghan cities and districts in recent weeks, they have detained and killed relatives of officials in the U.S.-backed Afghan government, forced women to marry their fighters and targeted journalists.

The lawmaker said that civil servants and activists in their hometown were told by local Taliban representatives to surrender and provide information like their home addresses; the lawmaker advised them not to because those details would make it easier for them to be hunted down. The Taliban is also forcing local families to provide young men as fighters, the parliamentarian added.

An international response matters because Afghans are deeply affected by apparent global apathy toward them, the lawmaker said. “We are demoralized, we cannot continue, because we think the world is backing the Taliban instead of the people of Afghanistan.”

An official at the U.S. mission to the U.N. said that the Biden administration is open to tightening sanctions.

“If the Taliban continues down their current path of violence it will affect the Security Council’s review of the travel ban exemption and the status of designations,” the official told HuffPost via email. The official did not comment on potential new sanctions.

Biden aides say the U.S. continues to support the Afghan government and wants the Taliban to halt its assault in favor of talks to establish a power-sharing agreement. But the administration knows the next few weeks could bring a very different outcome. The president sent 3,000 troops to Afghanistan on Thursday to help withdraw many of the staff at the sprawling U.S. embassy in Kabul and he is speeding up efforts to evacuate Afghans who previously worked with American forces and are now Taliban targets. 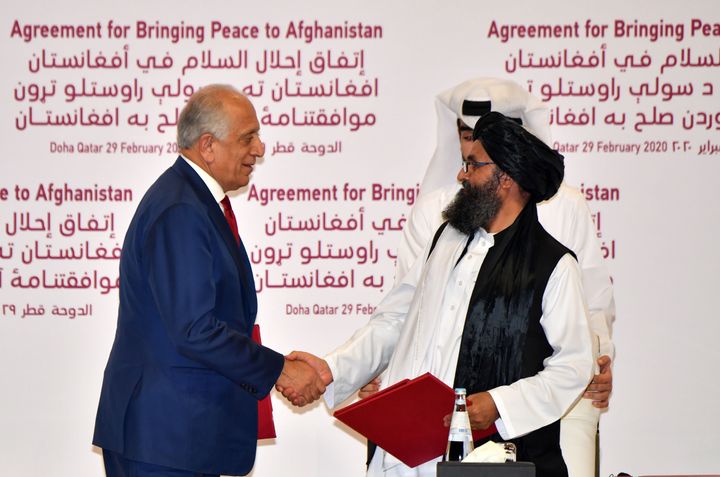 The Taliban’s takeover of more than two-thirds of Afghanistan ― and the collapse of U.S.-backed government forces in many areas ― has occurred far more quickly than American and Afghan officials expected, suggesting they could soon take their ultimate prize, Kabul.

The continued onslaught risks millions of Afghans’ lives and could shatter the society that has developed in the country over the last two decades, as women have come closer than ever to equal rights and foreign assistance has improved issues like humanitarian conditions and press freedoms.

The lawmaker who escaped a recent Taliban assault said it was hard to believe how quickly their life seemed to crumble.

One month ago, they were telling contacts abroad that instead of seeking safe passage out of the country for progressive Afghans, they should support their attempts to stay in their homes. “Now, after the things I saw, I think we have to find ways to leave instead … It’s better to have someone alive outside the country instead of someone who’s dead inside of the country.”

To the parliamentarian, like many Afghans, recent developments echo painful memories of Afghanistan’s civil war of the 1980s.

“It’s the same stories that my mom was telling me: We left everything behind, we had only one small bag,” they said. “Now this has happened to me.”

Ziggy Switkowski to stand down as RMIT chancellor

Op-ed: What nobody else will say about the new cybersecurity crisis

What Happened to America's Mayor?