“We take the virus very seriously. It’s a risk, it causes death, but you can’t cloister yourself at home, that is just contrary to the American spirit,” he said on “Fox News Sunday.”

Hutchinson, who has encouraged Arkansas residents to wear face masks in public, compared mask wearing and social distancing to buckling up while driving. 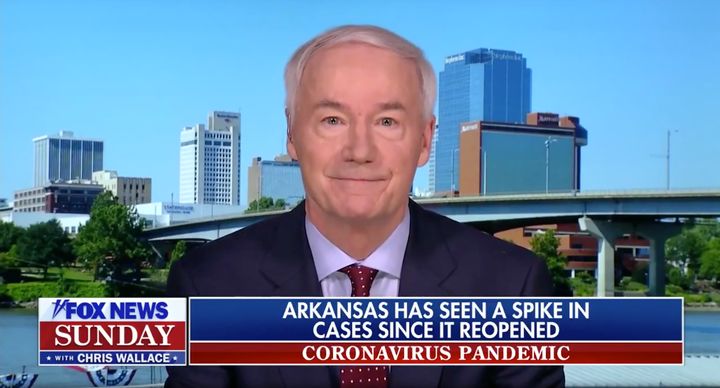 “You can be in an automobile and that is very risky, but you can manage the risk by wearing a seatbelt,” he said.

The governor’s assurance follows his state reporting 455 new cases of COVID-19 on Thursday, marking the single biggest increase that the state has seen thus far. It also follows reports of dozens of Arkansas residents spreading the virus at a church and at a high school pool party. Three people died as a result of the church infections.

By allowing the state to reopen despite the recent rise in cases, Arkansas is not following the White House’s guidelines that advise against easing restrictions until there has been a two-week decline in new reported cases, Fox News host Chris Wallace noted.

“Which raises the question, do you really have the virus under control in Arkansas?” Wallace asked him.

“You manage the risk by increasing the testing,” Hutchinson said, while arguing that the recent rise in cases is not because of lifted restrictions but instead due to an increase in testing capabilities.

The other solution, he said, is to educate the public about how to avoid infection.

“To me it’s a matter of self-discipline and that’s why I talk about the swim party and the fact that you can pass the virus at a swim party. I don’t think we’re going to say you can’t invite anyone over to a pool in the backyard of your home. I think you have to exercise discipline and have the right restrictions in place,” he said.

Hutchinson said earlier this month that his state expected to receive 90,000 coronavirus test kits from the Centers for Disease Control and Prevention, in hopes of increasing testing to an average of 2,000 a day.