When an outstanding chief executive quits or otherwise departs, it’s generally time to sell the stock.

It’s not just that they’ll be a hard act to follow; it’s also that almost inevitably there will have been a good deal of hype around his or her success, covering up for a multitude of long gestating operational and accounting challenges that will soon come tumbling out of the closet and have been left to the successor to confront. 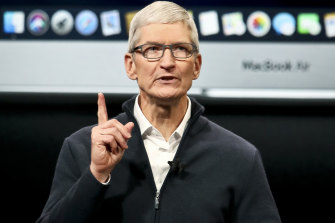 Apple’s value has soared under the leadership of chief Tim Cook. Credit:AP

That seemed to be the way to bet when Tim Cook took over at Apple after the untimely death of the company’s founder, Steve Jobs.

As we now know, it would have been a very bad bet to take.

Since Cook took up the reins just over a decade ago, the shares have risen in value by nearly 14 times, adding an astonishing $US2.7 trillion ($3.7 trillion) to the company’s market capitalisation.

This week, Apple became the first $US3 trillion company in history, almost as big as the total size of the UK economy, the latter as measured by annual GDP.

How did Cook achieve such a feat, and is that level of success even remotely sustainable? It is not even as if he has materially added to the company’s core product range. Much of what Apple today sells is still originally a Steve Jobs creation.

The trick has instead been one of incremental product enhancement, particularly of the company’s pioneering smartphone, and in steady expansion in spin-off revenue from the app store and ancillary services.

We should add to Cook’s managerial success something that has nothing to do with Apple as such. Abundant central bank money printing has put a rocket under virtually all asset prices, but particularly the big American tech stocks, which have benefited hugely from the compounding effects of indexation. With Apple now worth around 7 per cent of the entire S&P 500, the big has begotten the even bigger, with tracker funds driven to buy Apple shares in ever greater amounts simply to keep up with their growing weight in the index.

There is admittedly some reason in the underlying madness. Some of the biggest commercial winners from the pandemic have been the US tech giants, and especially Apple, whose products are tailor made for home working and social distancing.

The commercial and global success of the tech giants stands in marked contrast to the increasingly dysfunctional state of American society, politics and the constitution, and might, despite their economic success, even be deemed a part of that sickness.

Yet these are not the only malign forces at work here. The other is monopoly, where the tech giants have again led the way, creating a second “Gilded Age” of staggering wealth built on ever more concerning concentrations of market power. Betraying a once proud history of “trust busting”, the growth in monopoly been almost deliberately sanctioned by US policymakers.

Predatory takeovers and abusive market practice have been widely tolerated in a way that would have been unthinkable 50 years ago, and has led to a steep decline in the number of viable competitors, not just in tech but across sectors.

Looking at the origins of this most un-American of trends, it can be traced back to the late 1970s, and publication of a hugely influential book by a former solicitor general, Robert Bork, called The Antitrust Paradox.

This argued that competition law should not be concerned with protecting individual competitors, but instead with promoting pro-consumer, business efficiency.

It has been the refrain of the new monopolists ever since that economies of scale and market power allow them to offer cheaper prices to consumers, providing cover for a great raft of predatory practice.

Ironically, European Union regulators have been much more aggressive in keeping the tradition of US-style trust busting alive than American counterparts, among whom there is an understandable tendency to regard the tech giants as American success stories under attack from a jealous and protectionist Europe. Yet, possibly as a result of this old-style approach to competition policy, the cost of mobile and internet access is generally lower in Europe than the US.

Only quite recently has the tone of political debate in the US begun to shift back towards a more traditional antitrust mentality.

For the time being, however, the politicians remain a threatening but otherwise not particularly troubling cloud on Apple’s horizon. Stock markets don’t yet take the possibility of enforced breakup of the tech titans that seriously.

Perhaps they should, for on multiple fronts so-called FANGS and their ilk find themselves in growing conflict with large segments of US popular and political thinking.

Some of them are already very much part of the culture wars that destructively afflict American society. Already this week, the House Minority Leader Kevin McCarthy has torn into Twitter for permanently suspending the personal account of his fellow Republican Marjorie Taylor Greene over postings she made about COVID-19 vaccines. Other social media companies have likewise found themselves accused of trampling over free speech by removing content from known Right-wingers deemed inappropriate or misleading.

In any case, the commercial and global success of the tech giants stands in marked contrast to the increasingly dysfunctional state of American society, politics and the constitution, and might, despite their economic success, even be deemed a part of that sickness.

Far-fetched though the idea might be, the number of Americans talking and writing about secession or even civil war has grown off the scale. According to one all too plausible calculation, over 70 per cent of citizens will be concentrated in just 15 states by 2040, accounting for well over 70 per cent of US GDP.

Where that leaves the political power currently vested in the remaining overwhelmingly Republican 35 is anyone’s guess, but it hardly makes for a happy nation. Like the tech giants, the constitution finds itself out of sync with the people it is meant to serve.

The way things are going, President Xi Jinping won’t have to do very much to underwrite China’s ascendancy into a position of global leadership; in tearing itself apart, America does the job for him. Xi has already clamped down on his own overmighty tech giants, as well as the “sissy boys” celebrity culture, as he calls it, that they feed. There’s not much to admire in the Chinese president, but some might think he’s got a rather better grasp of the future than the Western money managers who have just bestowed a $US3 trillion valuation on Apple.

Most Americans back both early voting and ID requirements, Monmouth University Poll finds