Dr. Anthony Fauci has been a leading voice in the fight against coronavirus and has repeatedly corrected President Donald Trump’s misinformation about the outbreak. In an interview with Science Insider, the director of the National Institute of Allergy and Infectious Diseases unpacked how he’s navigating that role without losing his job.

In light of the president’s history with dissenting voices, Fauci’s absence from a handful of recent press briefings sparked speculation online that he’d been fired ― or perhaps had fallen ill.

“Well, I’m sort of exhausted. But other than that, I’m good. I mean, I’m not, to my knowledge, coronavirus infected. To my knowledge, I haven’t been fired,” he told Science Insider.

“To his [Trump’s] credit, even though we disagree on some things, he listens. He goes his own way. He has his own style.  But on substantive issues, he does listen to what I say,” Fauci said.

When asked to weigh in on the inaccurate virus timeline painted by Trump during a press briefing Saturday, Fauci shed light on how he corrects the president.

“The way it happened is that after he made that statement, I told the appropriate people, it doesn’t comport,” Fauci told the magazine.

Even though he has on multiple occasions fact-checked the president in real time, Fauci said he can hardly do so on every occasion.

“The next time they sit down with him and talk about what he’s going to say, they will say, by the way, Mr. President, be careful about this and don’t say that,” Fauci said. “But I can’t jump in front of the microphone and push him down. OK, he said it. Let’s try and get it corrected for the next time.” 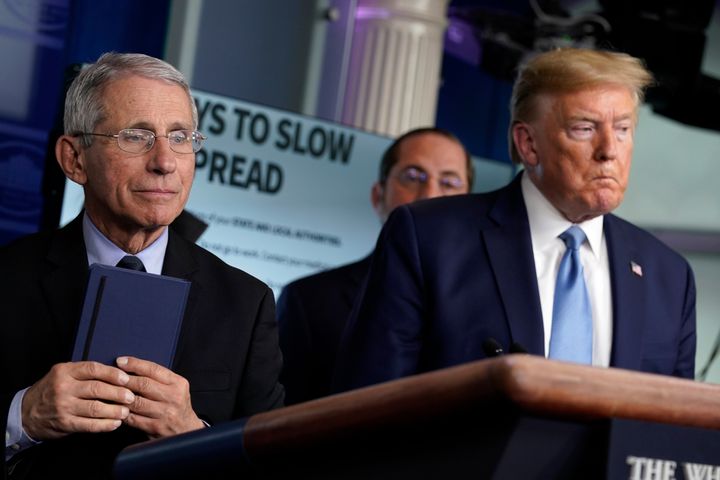 Fauci has repeatedly provided a factual counterpoint to the Trump administration’s response to the outbreak. On Friday, after Trump touted two malaria drugs as a treatment against coronavirus, Fauci pushed back, explaining that the only evidence those drugs were effective was anecdotal. Weeks ago, when the president riffed about a vaccine for COVID-19 being ready in months, Fauci noted that it would likely take at least a year. And despite repeated assurances from Trump that testing was readily available, Fauci has labeled the lack of testing “a failing.”

“The president is talking about hope for people” while his own focus is on the science, Fauci said.

Fauci referred to similar diplomacy and fact-based counters to Trump during an interview with The New York Times last Thursday, describing his public opposition to the president’s claims as a “risky business.”

“I don’t want to embarrass him,” he added. “I don’t want to act like a tough guy, like I stood up to the president. I just want to get the facts out. And instead of saying, ‘You’re wrong,’ all you need to do is continually talk about what the data are and what the evidence is.”

How the Paramount+ launch compares with Apple TV+, Disney+ and all the rest