A Pilbara Aboriginal elder used a welcome to country ceremony to berate iron ore miner Fortescue and its founder Andrew Forrest for a lack of opportunities for her Nyamal people on Fortescue’s under-construction Iron Bridge project.

Former Aboriginal elder of the year and Nyamal woman Aunty Doris Mitchell-Eaton’s impassioned speech was a surprise start to the ceremonial opening of the incomplete mine in the Pilbara on Monday in front of WA Deputy Premier Roger Cook and media flown in for the day as well as Forrest.

Mitchell-Eaton immediately began levelling criticism at Forrest and FMG for not giving Nyamal Aboriginal Corporation-linked mining organisations the opportunity to work on the $US3.8 billion ($6 billion) Iron Bridge, which is expected to become fully operational next year.

“Good morning everyone and welcome to this lovely place that’s getting destroyed. Our Country. So beautiful,” she said.

Mitchell-Eaton claimed that when traditional owners and Forrest first signed an agreement to mine the land they were given assurances that Nyamal people would be employed, but they have since been told no because they “didn’t have the capability”. 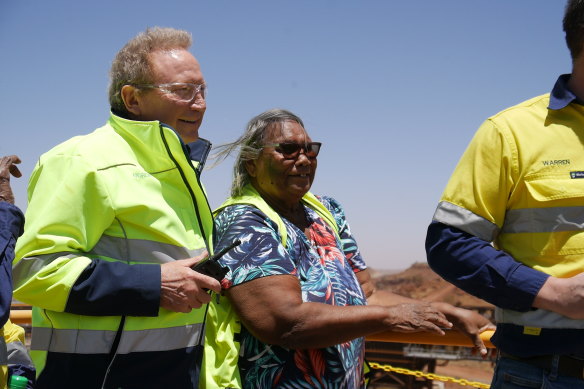 “Give us the opportunity to build that capability, to mine our country,” she said and referred to a Nyamal company not being given a chance to help build Iron Bridge.

“I’m standing here as a proud Nyamal, it’s hurt my feelings to see every people coming in here digging in our country and we haven’t got an opportunity.”

Mitchell-Eaton said her people were not against mining but wanted traditional owners to have the final say on mining projects.

She called on Forrest to set up a meeting with her to discuss the issues.

“Give us this good opportunity, we want to build this capability. That’s the word I learned from FMG because FMG knocked us back with Nyamal mining. ‘You haven’t got capability’,” she said.

“I’m coming, Andrew. I want to set up a meeting. I’m coming with the capability.”

Mitchell-Eaton was given a last-minute opportunity to perform the welcome to country ceremony after telling Forrest she wanted to speak.

Forrest has known Mitchell-Eaton for more than 40 years and when he took to the stage after her impassioned speech he railed against Indigenous people being “held back by even the best-intentioned bureaucrats,” an issue Mitchell-Eaton had not mentioned.

“If we cover people with welfare, with drugs and alcohol, remove the planks of support … and burden them with low expectations,” then the life of Indigenous people would not improve, Forrest said. 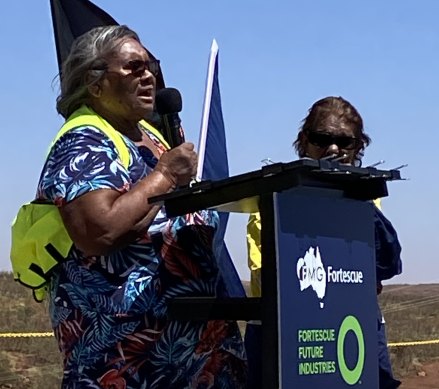 “We’ve fought like cats against the useless handout mentality.”

After Mitchell-Eaton had demanded a meeting with Forrest, the billionaire countered with the offer of a joint trip east to speak to Prime Minister Anthony Albanese as well as employment and training ministers.

“Aunty Doris, we don’t need a meeting to keep to our word, we’re keeping to our word, the meeting we need is with the people who … make decisions for us out here in the bush which don’t help us,” he said.

“When they wipe out the cashless debit card because there are a few whingers in Toorak, St Georges Terrace, Pitt Street, when we don’t continue the vocational training and employment centre which has changed the lives of 15 years of people.”

Forrest said the mining sector was the biggest employer of Aboriginal people in the country.

“[The mining industry] has been singly responsible for the training of more Aboriginal people than any other industry in Australia and employment of advanced highly paid Aboriginal people because when we take our welfare foot off their necks they succeed as well as anybody else,” he said.

After an 8 per cent plunge on Friday, Fortescue shares closed Monday down 1 per cent to $14.70 a share.