It was a time when the city had more crime but fewer cars. Hometown slumlords weren’t in the White House, and a deadly superstorm hadn’t yet given New Yorkers a taste of the climate catastrophe that now looms.

Yet it’s that Mad Libs of modern politics that set Constantinides on his current course, which found him back in his old stomping grounds last week knocking on doors in the cold evening drizzle. This time, he was selling something entirely different: himself, as the climate change-focused candidate seeking to be the new Queens borough president.

After serving six years on the City Council representing his native Astoria, a middle-class Mediterranean enclave in western Queens, Constantinides wants to work for the entire borough of 2.3 million people ― a place that, on its own, would rank as the United States’ fourth-largest city, slightly behind Chicago and ahead of Houston.

The job of the borough president is generally viewed as a perch for political patronage, but Constantinides is pitching himself as the candidate who cares most about the climate crisis — an issue heretofore unheard of in the race for this relatively obscure seat.

“I’m running to completely transform this office and bring green jobs to Queens,” Constantinides, told 31-year-old Franklin Mendez, after knocking on the door of Mendez’s second-floor walkup. “We can take back control. We can build clean power here, and we can own it ourselves, not let ConEd own it.”

Climate populism is an unusual approach for this New York City post to which few outside party machine circles pay attention. Largely a holdover from the late 1800s, when Manhattan, Brooklyn, Queens, The Bronx and Staten Island were first fused into one city, the position has long been a way to hand ascendant party power brokers an eight-figure budget to dole out and build a network of support while biding time until a more intriguing electoral slot comes along. (Brooklyn Borough President Eric Adams is considered a top contender for New York City mayor next year, and Melinda Katz, the most recent Queens borough president, quit her post last year after winning the county’s nationally watched district attorney race.) 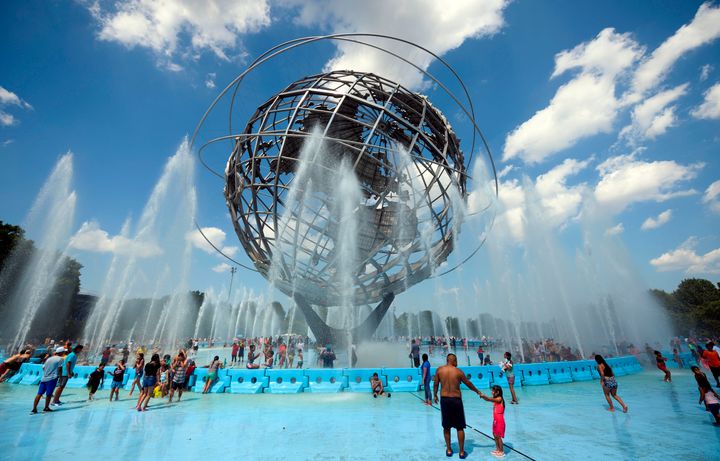 But borough presidents also oversee the community boards that control land-use and zoning policies, which can dictate developers’ fortunes and how the borough addresses its dire housing shortage, not to mention the planet-heating emissions that come from buildings.

It’s here that Constantinides has created a path for himself in the crowded March 24 special election.

As the head of the City Council’s environmental committee, Constantinides styled himself as New York’s leading climate crusader. Last year, he passed historic legislation, dubbed a “Green New Deal for New York City,” requiring energy-efficiency retrofits on large buildings, increasing renewable power on rooftops, and starting the process of closing the city’s two dozen oil- and gas-fired power stations. Other bills, including one to replace the jail complex on Rikers Island with a solar farm and water treatment plant and another to create an entire new city agency devoted to climate adaptation projects, have yet to come up for a vote.

Other parts of the platform are already gaining traction. Constantinides’s proposal to give all five borough presidents voting appointees on Metropolitan Transportation Authority’s board, granting them more say over the city’s ailing subways and buses, was introduced as a bill in the state legislature in Albany last month.

“There’s a lot of power here,” Constantinides said in an interview. “Queens could be the fourth-largest city in the country yet we treat the borough president like it’s a ceremonial office, like they’re supposed to be a cheerleader. It should be a policy-heavy office.”

Yet he faces serious competition in a race that’s likely to see low turnout and geographical divisions the city’s most diverse and physically largest borough. The eight other candidates who last month met the 2,000 signatures required to appear on the ballot include Councilman Donovan Richards, a real estate favorite with a strong base of support in climate-vulnerable southeastern Queens, and Elizabeth Crowley, a former councilwoman and cousin of former U.S. Rep. Joe Crowley, the powerful party boss dethroned by Rep. Alexandria Ocasio-Cortez (D-N.Y.) in 2018.

Echoes Of The Presidential Primary

The realities of climate change hit home in Queens in October 2012. Superstorm Sandy whipped Queens with winds of up to 85 miles per hour and inundated the coastal neighborhoods with surges up to 6.5 feet high, according to National Weather Service records. In total, 43 New Yorkers died in the city, including several Queens residents in the beachfront Rockaways who drowned in their homes. 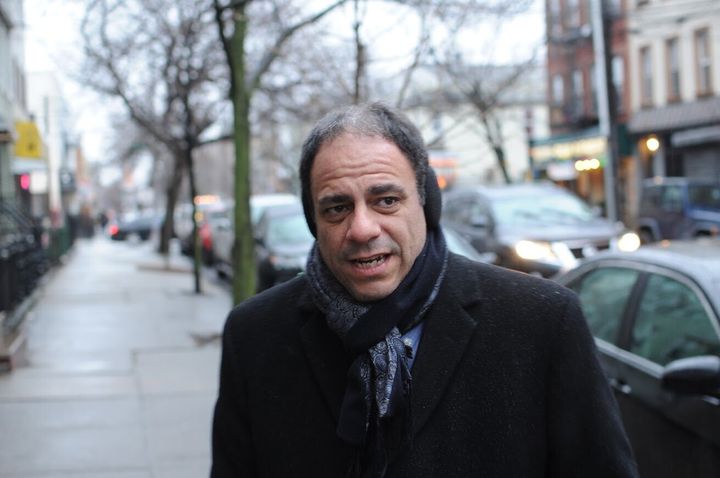 By 2019, 79% of Queens residents understood climate change was happening, 87% wanted schools to teach more about global warming, and 77% said they prioritize environmental protection over economic growth, according to the Yale Program on Climate Change Communication’s county-level polling. Perhaps more tellingly: 66% wanted local officials to do more about global warming.

During Katz’s final year as borough president, she budgeted $65 million for renovations, construction and other projects across the borough. That included $815,000 for a new boiler at the Queens Theatre, $1 million for affordable housing construction in the Jamaica neighborhood and $3 million for upgrades to a park playground in the Flushing area.

Constantinides is proposing to redirect much of that budget toward projects that would scale up solar, wind and battery power across Queens and invest in coastal projects that provide much-needed flood and storm protections.

Coupled with a broader set of proposals to expand disability access to public spaces and establish satellite offices with staff that speak the native languages of residents in immigrant neighborhoods, the platform echoes Washington Gov. Jay Inslee’s ill-fated bid for the 2020 Democratic presidential nomination. The former candidate, who dropped out last summer after failing to get more than 1% in national polls, ran as the race’s climate candidate, weaving progressive policy ideas into a book-length stack of technocratic proposals to drastically curb emissions by 2030 and transition the United States off fossil fuels.

Aside from the obvious differences between local and federal policymaking, Constantinides diverges from Inslee’s vision by prioritizing public utilities. Whereas Inslee’s plan emphasized forcing private utilities off gas, oil and coal, Constantinides leans closer to Democratic frontrunner Bernie Sanders (I-Vt.) as the only candidate in the borough president race to embrace the public power plan New York City chapter of the Democratic Socialists of America put forward. The plan calls for a public takeover of the systems over which ConEdison and National Grid, two investor-owned utilities, enjoy regulated monopolies.

“Electricity is a human right meant for everyone — just like clean water and high-speed internet access,” Constantinides wrote in an op-ed last November. “We’ve lost too many generations to illness and poverty because utility companies have withheld this right to line their own pockets.”

Courting Support In A Weird Race

From the outset, Constantinides faced an uphill climb.

For starters, the special election is just the first of five times Queens voters are tasked with weighing in on the borough president, as The City reported in January. After the March 24 ballots select a fill-in for Katz, voters of both major parties will return to the polls in June for a primary and again in November for a general election to complete the final year of Katz’s term, which ends on Dec. 31, 2021. Next year, there will be another primary and another general election to choose a new borough president for a four-year term.

Winning the special election would give Constantinides an incumbent’s advantage in the races ahead. And he said he plans to stay for the long haul, ideally retaining the office through 2030, the deadline by which United Nations scientists determined the world must halve emissions or face irreversible climate destruction.

“If I have the opportunity to transform city government around climate change, that’d be a decade well spent,” Constantinides said. “This whole office can be focused on fighting climate change.”

The sudden departure last month of Constantinides’s main rival for the progressive vote considerably improved his odds. Citing family issues, Long Island City Councilman Jimmy Van Bramer, a gay progressive who campaigned hard for Katz’s left-wing opponent Tiffany Cabán, dropped out of the race. His exit eliminated competition for the increasingly left-leaning western half of the borough, which elected Ocasio-Cortez to Congress and went overwhelmingly for Cabán in the hotly contested district attorney primary.

Endorsements have poured in for Constantinides since January. State Sens. Michael Gianaris, the powerful Astoria Democrat credited with driving Amazon out of the borough, and Jessica Ramos, a hard-line progressive who ousted a conservative Democrat in 2018, have backed him. So does Josh Fox, the activist, Sanders 2020 surrogate, and filmmaker behind the Emmy-winning anti-fracking documentary “Gasland.” 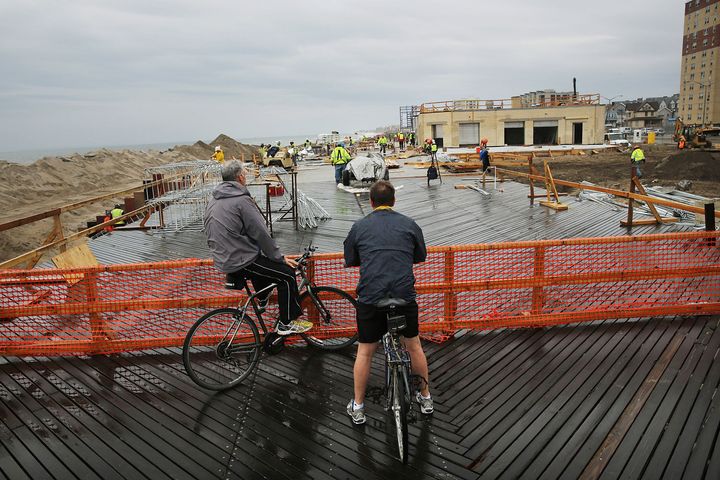 “I’ve worked with him for years to stop fracking and defend New York City from climate change and his vision for renewable energy and sustainability in New York is desperately needed right now,” Fox said. “I endorse him wholeheartedly.”

Yet Constantinides’ remaining opponents are formidable. One of the few public polls released in the race showed Crowley leading among 1,282 likely voters in the election and Constantinides trailing in fourth place. And the party establishment is coalescing behind Richards, who is widely seen is the likely favorite to win next month. In December, U.S. Rep. Greg Meeks, the powerful Queens Democratic Party chieftain, endorsed Richards in a backroom meeting that both Constantinides and Van Bramer denounced as “corrupt.”

That hasn’t stopped Richards, whose council district includes the storm-ravaged Rockaways, from gaining grassroots support. Milan Taylor, executive director of the Rockaway Youth Action Fund, took it as a slight that the Constantinides campaign hadn’t yet contacted the local nonprofit. His group has yet to endorse, though Taylor noted he doesn’t “think there’s a stronger candidate” on climate change than Richards. (Richards’ campaign website instead focuses on criminal justice reform, affordable housing, immigrant rights and public transit.)

Yet the message seemed to resonate when Constantinides pitched it directly to voters.

Peering out from behind the door to his apartment, Raul Neri, 19, admitted he hadn’t thought much about climate change until seeing the hellish images of the inferno that scorched Australia in recent months.

“It’s scary, man,” he said. “It’s good someone wants to do something.”

Standing in her door jamb as the drizzle came down, Tran Nguyet, 78, listened to Constantinides repeat his pledge to double green spaces across the borough. She looked up at the bare deciduous tree on the sidewalk outside her building.

“Hey, that sounds good to me,” she said. She reached down to pick up her paper, and Constantinides quickly bent over to grab it for her. She smiled and said, “Yes, I’ll be voting next month.”