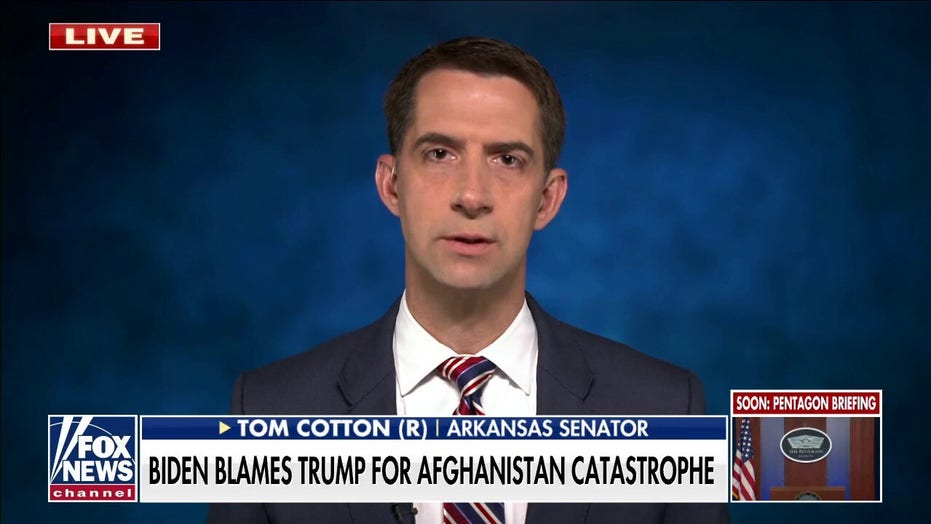 Sen. Cotton: Biden rushed troops out of Afghanistan for 9/11 symbolism, created a ‘debacle’

Sen. Tom Cotton, R-Ark., warns the consequences of the president’s ‘terrible judgment’ are playing out in the Middle East.

Americans and Afghan interpreters are turning to Congress for help getting out of Afghanistan and into the U.S. amid the fall of Kabul and the rise of Taliban rule.

Some Republican lawmakers are speaking out about the number of people contacting them for help fleeing Afghanistan amid the botched troop withdrawal that led to the Taliban swiftly taking over the country.

Currently, it is estimated that there are some 10,000 Americans still in Afghanistan. The Pentagon said Tuesday during a press briefing that more than 4,000 troops will arrive in Kabul by the end, with the goal to evacuate 5,000 to 9,000 people daily.

Sen. Tom Cotton, R-Ark., told Fox News in an interview on Monday that between “400 and 500 people” contacted his office in a period of between 12 and 18 hours “pleading for assistance,” after opening his phone lines up to all Americans stranded “behind Taliban lines.”

“And remember, these are not just Afghan civilians that have helped us,” Cotton said in the interview. “These are American citizens holding American passports who, for four months, did not receive guidance about what to do.”

Cotton also tweeted that President Biden’s pullout of Afghanistan “has been recklessly negligent.”

The pleads for help from American citizens trapped in Afghanistan come amid the Taliban’s blitzkrieg that felled Kabul and saw them take power.

The U.S. Embassy in Kabul posted and quickly deleted a tweet on Monday instructing Americans trapped behind Taliban lines to fill out an online form and wait to be called to the airport for assistance leaving the country.

President Biden delivered a speech defending his decision to pull out of Afghanistan and blaming the Trump administration for their withdrawal deal with the Taliban as well as pointing fingers at the Afghan army for lacking “the will to fight” for their future.

The comments contrast with candidate Biden’s promise to do his “job and take responsibility” for his actions.

The president’s East Room remarks came after he traveled back to Washington, D.C., from Camp David, where he had bunkered down amid the fallout of Afghanistan’s stunning collapse.

Biden took no questions after the speech, hurrying out of the East Room and traveling back to the presidential retreat.

Trump Says WHO ‘Blew It’ on Coronavirus Travel Advice