Amazon is selling controversial items including pro-Antifa, anti-police, and anti-Israel merchandise, even though it violates corporate policy banning certain "offensive and controversial" materials.

The company has taken down multiple products in the past that directly violated its policies.

Amazon pulled the Confederate flag in 2015 after the tragic shooting of a historic Black church in Charleston, South Carolina. The company also removed the "Dukes of Hazzard" from its streaming service due to Confederate flag imagery and stopped the sale of leggings with Hindu gods after complaints.

Amazon's online list of prohibited products covered "Offensive and Controversial Materials" and told potential sellers what's not allowed to be sold on the virtual shopping mall, except for "books, music, video and DVD."

"Amazon does not allow products that promote, incite or glorify hatred, violence, racial, sexual or religious intolerance or promote organizations with such views," the page read. "We'll also remove listings that graphically portray violence or victims of violence.

"We exercise judgment in allowing or prohibiting listings, and we keep our global community of customers and cultural differences and sensitivities in mind when reviewing and making a decision on products," the page continued.

In addition, Amazon stated on its "Content Guidelines for Books" page that the company wouldn’t sell any book that it determined was "hate speech" or "advocates terrorism," among other restrictions.

Despite the company's multiple disclaimers, the Amazon online marketplace contains many controversial products, including products that directly could be linked to inciting violence and hatred.

A customer could buy "Antifa: The Anti-Fascist Handbook" off of Amazon for just under $17, and with an Audible subscription, it’s free. Amazon carries anti-Antifa gear on its website, as well,

Antifa — short for anti-fascism — is a far-left political extremist group that has used violence to achieve its end goals. The group has been linked to violent protests around the country, threatened and assaulted journalists, called for law enforcement officers to be fired or killed, and prevented Seattle police from responding to emergencies with snow barriers.

Amazon has sold clothing ranging from masks to T-shirts emblazoned with the slogan "Blue Lives Murder" — an anti-cop slogan accusing police of murder — which has sparked backlash. 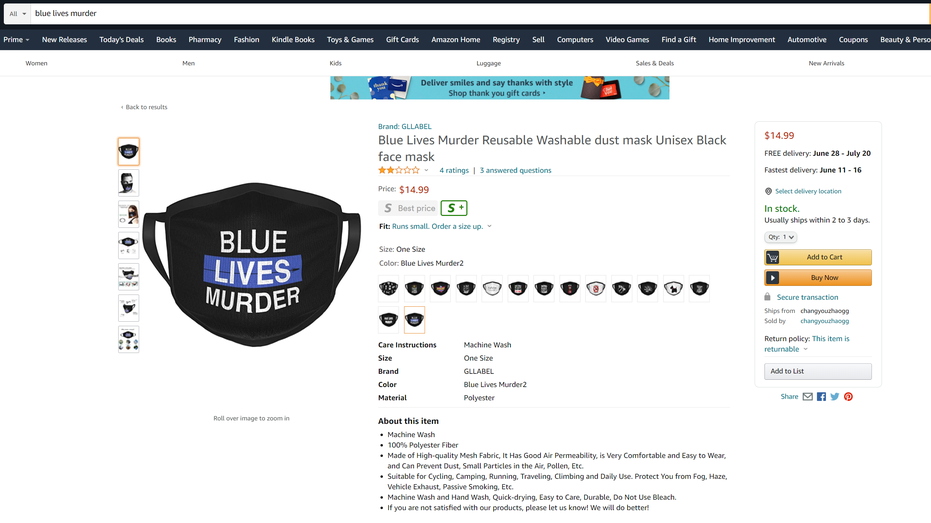 A “Blue Lives Murder” mask available for purchase on Amazon.

While the company also has sold "Blue Lives Matter" gear, a pro-police slogan, the "Blue Lives Murder" apparel appears to violate the company's policy against carrying items that "promote, incite, or glorify hate or violence towards any person or group." 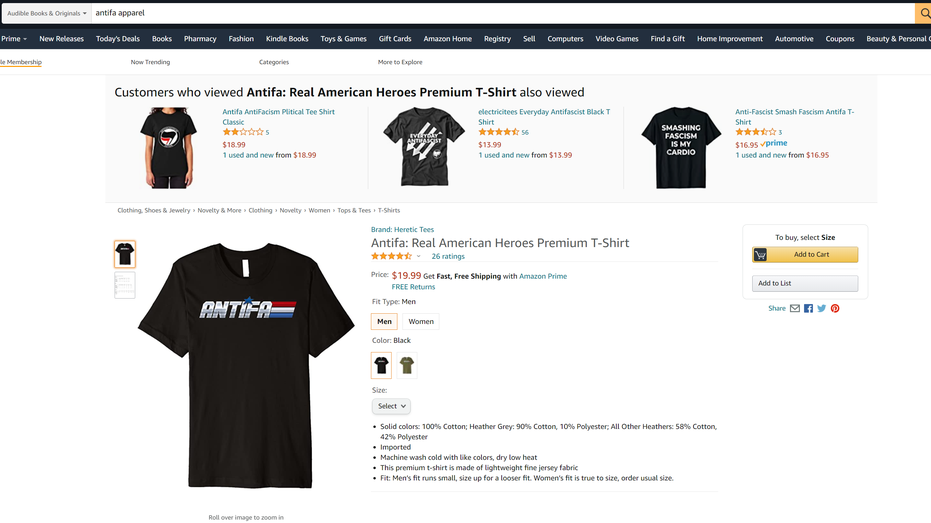 Also on the website: products promoting the "Free Palestine" movement, including a phone case with the hashtag "Gaza Under Attack," a hoodie with a Google look-alike asking if the person searching "Israel" meant "Palestine" and a T-shirt with the Palestinian political cartoon character "Handala."

Handala has become a widespread symbol of the Boycott, Divestment, Sanctions (BDS) movement — a movement aimed at destroying the state of Israel.

Amazon also has carried items accusing Israel of being occupiers.

Merchandise with the phrase "from the river to the sea, Palestine will be free," a chant used by both pro-Palestinian demonstrators and the terrorist organization Hamas, has been available for purchase. The phrase supported the creation of a Palestinian state from the Jordan River to the Mediterranean Sea in order to erase Israel off the map, according to the American Jewish Committee. 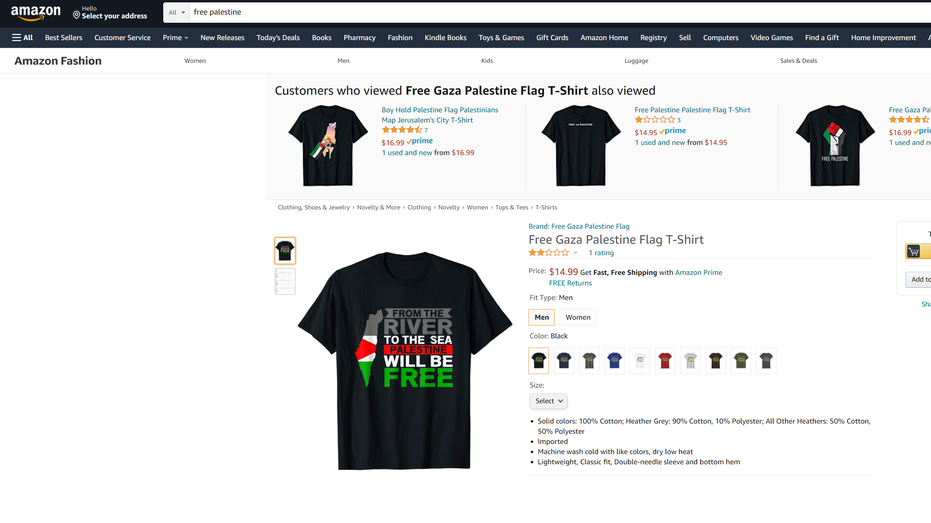 Amazon has sold a shirt including a frequently used chant by pro-Palestinian demonstrators and the terrorist organization Hamas.

The company’s corporate policy claimed it would not sell items "related to terrorist organizations." However, Hamas is an internationally recognized terrorist group, classified by the State Department.

Amazon did not respond to Fox News’ request for comment.