Reaching all 7.8 billion people on the planet with a coronavirus vaccine will require a global airlift filling the equivalent of 8000 Boeing 747 freighters, according the International Air Transport Association.

The capacity estimate assumes that an inoculation program would require only one dose, while multiple-course treatments would add to the demand, Glyn Hughes, the industry body's head of cargo, said in a media briefing on Wednesday. 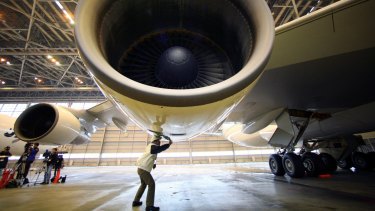 It is estimated 8000 Boeing 747s will be needed to help distribute a vaccine around the world. Credit:AP

"Airlift is the correct terminology here," Hughes said. "We know the procedures well. What we need to do is scale them up to the magnitude that will be required."

Some planes may not be suitable if the vaccines require the typical temperature range of 2-to-8 degrees Celsius for transporting drugs, he said. Frozen shipments would exclude even more aircraft.

IATA is working with airlines, airports, global health bodies and pharmaceutical firms to pull together plans for a distribution program, calling it the industry's "largest single transport challenge ever."

Fraport AG's Frankfurt airport is assessing how it can help, while Air France-KLM is studying ways to maximise its network in Africa, Hughes said.

Flights to that continent as well as Latin America and parts of Southeast Asia, which lack vaccine-production capabilities, will be especially critical.

Developing markets rely almost wholly on cargo carried in the bellies of passenger planes, many of which remain grounded because of the falloff in demand and travel restrictions put in place to stop the spread of the virus.

Distributing a vaccine in Africa would be "impossible" right now, Hughes said, given the lack of capacity combined with the size of the region, thin surface-transport infrastructure and the complexities of border crossings.

Shipments will need to be planned with "almost military precision" and will require cool facilities at a network of staging posts where drugs can be stored between flights on the way to local dispersal.

There are as many as 250 different vaccine programs under development, Hughes said, citing the World Health Organisation.

The US and other governments have invested billions of dollars to develop a shot at an accelerated pace, and more than two dozen vaccines are now being tested in volunteers less than a year after the virus was first discovered. Eleven candidates are in late-stage trials.