Air New Zealand will turn one of its domestic aircraft into a flying environmental monitor as part of a world-first project with NASA to collect data used to predict severe weather events and to inform climate change research.

New Zealand's national carrier will install satellite receivers on one of its Bombardier Q300 turbo-prop aircraft, which will then collect environmental data for NASA's Cyclone Global Navigation Satellite System as it flies between 19 different airports around the country. 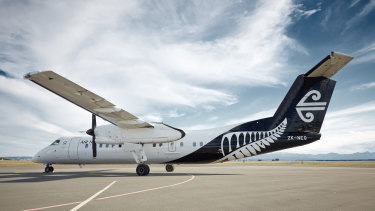 An Air New Zealand Bombardier Q300, which will be used for the projected.

The NASA program consists of eight small satellites measuring wind speeds around the globe by tracing GPS and other signals reflected from the ocean and uses that to predict cyclones and hurricanes.

“This is a new approach to climate science and exciting terrain," Dr Skofronick-Jackson said.

The project is the first time a passenger airline has worked with a NASA earth science mission.

Delwyn Moller, a radar systems engineer and professor at the University of Auckland, which will process data collected on the flights, said the mission could eventually produce New Zealand's largest source of environmental data.

“The constancy of Air New Zealand flying back and forth – these planes are workhorses – will give us insight into New Zealand’s local climatology in a way that is unprecedented," said Professor Moller, who set the project in motion after a visit to the airline's engineering team in Auckland.

"The fact we’re flying more or less continuously, zigzagging throughout the nation, we’re going to catch [weather] events and learn a lot from that by being in the right place and the right time."

Professor Moller said the information would be "different yet complementary" to what NASA collects from its satellites. It could be used in the short-term for flood risk management, agriculture and resource planning and for climate change research in the long-term, she said.

Aviation is responsible for about 2 per cent of global carbon emissions and airlines are coming under pressure to cut their environmental footprint amid a growing consumer backlash, dubbed “flight shame”.

The program's current satellites only collect data in the tropical storm belt, around the same latitude as Auckland, whereas Air New Zealand's plane will be flying right to the country's southern tip.

The first receiver will be fitted on a Q300 late this year and, if successful, the airline will consider adding it to more of the 23 planes in its fleet. Each sits 50 passengers and operates about 50 flights per week.

Professor Moller said the Q300s were already receiving the signals scientists were interested in on existing antennas and so capturing that data for analysis was  "as simple as basically flying a laptop".

Climate change was the airline's "number one" sustainability challenge, "so it’s incredible we can use our daily operations to enable this world-leading science," he said.