Australia's biggest energy supplier, AGL, says the development of terminals for importing liquefied natural gas along the east coast is needed if the nation is to avoid a looming supply shortage in the southern states.

In a warning on Monday, the competition regulator found that although there was a slight improvement in the east coast gas supply outlook for 2020, concerns remained about a gas shortage within a few years unless more supply was made available in southern states. 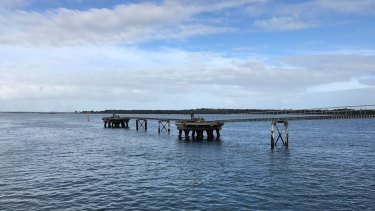 A jetty at Crib Point, where the floating gas import terminal would be placed. Credit:AGL

Two ways gas supply could be increased included the easing of the Victorian government's moratorium on gas exploration, which will be reviewed this year, as well as the construction of LNG import terminals, such as AGL's proposed $250 million terminal in Western Port bay.

"If we did start exploring today, I would say ambitiously seven to 10 years to deliver that supply to the market," said Phaedra Deckart, AGL's general manager of energy supply.

"So I think it's LNG imports and domestic gas – not one or the other."

Ms Deckart said AGL was committed to its environmentally contentious import terminal proposed at Crib Point despite a bitter community backlash, and was "very close" to submitting the project's environmental effects statement, which could be as early as May.

"We take the community concerns very seriously – that's why it's taken us longer than we had expected to ensure we complete a robust environmental effects process," she said

"What I can say is that when the terminal reached final investment decision, it will deliver 500 terajoules a day of capacity into the market … and up to 750 terajoules of peaking capacity. LNG imports provide something that is very hard to get into the market, which is significant capacity and back-up security of supply."

Frank Tudor, the managing director of east-coast electricity and gas transmission company Jemena, said LNG import terminals had come a long way in the past five years, with LNG imports now being considered by 40 countries.

"They are not a traditional terminal that we would've known five years ago when you've got onshore large tanks, to the tune of $1 billion dollars," he said. "We are talking about is floating infrastructure, floating re-gassification, floating storage."

The problem of a tightening gas market takes on increasing urgency with heavy gas users such as manufacturers  openly blaming historically high gas price as they close factories in Victoria and NSW.

The Australian Competition and Consumer Commission (ACCC) on Monday pointed to an improvement in the gas supply outlook when compared to the previous report in July.

"This is good news for households and businesses in eastern Australia as increased supply drives
down prices," Energy Minister Angus Taylor said. "That’s why we signed our landmark state deal with NSW to get more supply into the market."

But as the report found the long-term gas supply outlook for southern states remained tight, Mr Taylor renewed his calls for the need for state governments to "remove blanket bans and moratoria" on gas developments.

The Commonwealth has struck a $3 billion agreement in return for NSW committing to increasing production of natural gas. It has already flagged a hard line in talks with Victoria, which has a moratorium on onshore gas drilling despite facing supply shortage and some of the nation's highest gas prices.

AGL argues the Crib Point could begin operating in 2022 and could prove crucial in shoring up gas supplies for Victoria and NSW. Another proposed east-coast LNG import terminal is at NSW's Port Kembla, backed by a consortium including Andrew 'Twiggy' Forrest’s Squadron Energy and Japan's JERA.