Afterpay beat market expectations but also flagged it will continue to significantly investment in growth opportunities around the world including its entry to the Canadian market this year.

The company said merchant turnover using its buy now pay later service more than doubled to $4.8 billion for the December half year and the company said its current run rate is for $11 billion of turnover per annum. Active customer numbers were up 134 per cent to 7.3 million, and group revenue nearly doubled to $220 million. 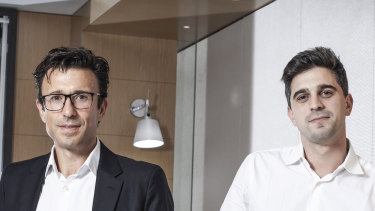 Morgan Stanley, which upgraded the stock ahead of the result, was forecasting active customer numbers of 7.1 million and $4.6 billion of turnover and revenue of $223 million.

Morgan Stanley has a price target of $45 on the stock which was down slightly this morning to $34.95.

The company flagged its "ambition' to reach 9.5 million active customers this financial year, and exceed its previously stated target for $20 billion of merchant turnover by the 2022 financial year.

"Our global expansion is accelerating with the US and UK growing at a considerably faster rate than what we experienced in ANZ," he said.

Speaking of the investment in the new growth targets, Mr Eisen said "while this will impact group profitability in the short term, we expect to achieve higher profitability in each market as they mature over time, in line with our ANZ experience."

Afterpay reported that losses before tax increased by 66 per cent to $35.8 million.

He also confirmed that the company will launch in Canada this calendar year.