In the days after a New York Times report indicated Michael Bloomberg’s financial influence may have led a major think tank to remove his name from a report on Islamophobia, Muslim groups and advocates have renewed their calls for the presidential candidate to apologize for his treatment of American Muslims.

Senior-level members of the Center for American Progress removed eight mentions of Bloomberg’s name ― and more than 4,000 words about the New York City Police Department surveilling Muslim communities ― from a 2015 report because the organization was worried about blowback from the wealthy politician, according to the Times. Bloomberg, a billionaire, had given the organization nearly $1.5 million worth of grants by the time the report was published.

The edited CAP report is yet another example of Bloomberg’s problematic record on policing and violating Muslim civil rights, advocates say. The former New York City mayor has refused to accept responsibility for the NYPD’s surveillance program, has a dismissive attitude toward the Muslim community’s civil rights and has repeatedly used his wealth to silence his critics — which civil rights activists say make him a dangerous candidate for president.

Bloomberg’s campaign did not respond to HuffPost’s request for comment.

Under the NYPD program that started in 2011, law enforcement placed undercover informants in predominately Muslim communities. They took pictures and video of mosquegoers, recorded the license plate numbers of worshippers, chatted up Muslim business owners, hung out in hookah bars — and reported everything back to the NYPD.

A coalition of leading Muslim advocacy organizations sent a letter to Bloomberg last week in which they demanded an apology for his role in the program during his tenure as mayor.

“In perpetuating bigoted stereotypes, your actions as Mayor of New York City, and your rhetoric on this issue has put the lives of American Muslims at risk of prejudice and violence,” they wrote. “We call on you to apologize unequivocally for the harm you have done and condemn the implementation of any similar programs.” 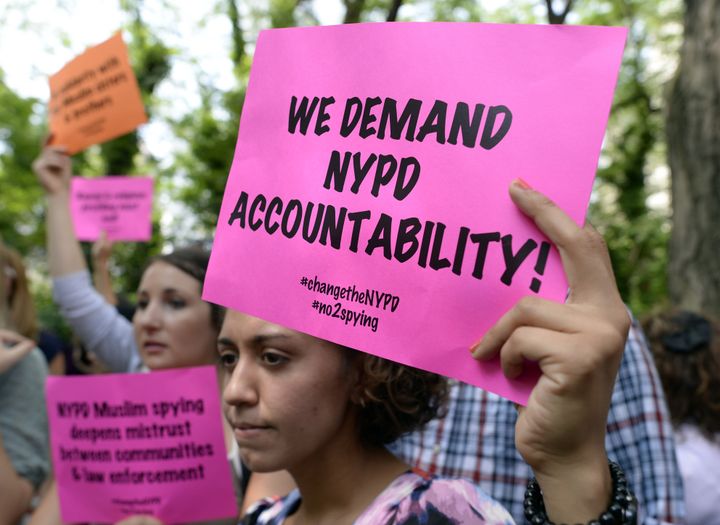 The surveillance tarnished the relationship between Muslims and law enforcement, even after it was shut down. Bloomberg has firmly defended the program, which Donald Trump praised during his presidential campaign.

But CAP’s “Fear Inc 2.0.” report ― which the organization’s website says addresses the rise of “politically motivated Islamophobia,” and particularly the influence Islamophobia had on law enforcement training ― ended up not mentioning Bloomberg’s ties to the program.

Yasmine Taeb, a co-author of the report and a former CAP employee hired to manage the Islamophobia project, told HuffPost she was disappointed to see the final version.

“My job was to ensure that the report that we were putting out at captain was factual, detailed and impactful,” Taeb said. “We weren’t going to put out a product with our names on it that was going to whitewash the NYPD’s egregious actions. To me, it was unthinkable. There was no way I was going to do that and I know that CAP knew that.”

“The sort of message that it sends to our community and other communities that have been targeted by Mayor Bloomberg policies is that ultimately you take a backseat to Mayor Bloomberg money,” she added.

CAP told the Times there were other reasons to revise the section of the report that tied Bloomberg to the NYPD surveillance program. The organization did not respond to HuffPost’s request for comment.

Several Muslim groups have called on CAP to explain exactly why the chapter about the NYPD was removed from its report, and to release it to the public. They also proposed creating a consultation process for future reports documenting issues facing the Muslim, Arab and South Asian communities.

“The removal of the NYPD spying program from this report compromises the important structural analysis of the role of the state in advancing Islamophobia,” several local and national organizations that work with those communities wrote in an open letter to CAP.

For this to have happened at a liberal organization that claims to be nonpartisan was particularly alarming, said Darakshan Raja, the co-director of the Justice For Muslims Collective, a D.C.-based grassroots group that fights institutional Islamophobia.

“It’s important for the average person to see the influence and particular relationship with big money into these organizations and how that can have indirectly or directly can have an influence on the type of information that is put out or not put out,” Raja told HuffPost.

It is especially critical for such reports to accurately depict the traumatizing result the surveillance program had on Muslims, Raja said.

“For Muslim communities who’ve gone through the brutality of the NYPD surveillance and mapping program, in addition to the hate violence that community experiences, we don’t have the privilege to cut out that part of our lives,” said Raja. “Unlike this chapter, we can’t say, let’s just take one part of myself out that was experiencing hate and NYPD mapping and yet you can focus on all other aspects of my life.”