CHARLESTON, S.C. ― Most of the Democratic field stepped into the debate hall here Tuesday night needing a clear win to upend a messy 2020 presidential primary race. None of them got it.

In less than a week, South Carolina voters will cast their ballots in the fourth election day of the 2020 presidential cycle — the first race in which African American voters will make up the majority of the electorate. And in exactly a week, 14 states, American Samoa and Democrats abroad will follow suit on Super Tuesday, by the end of which 40% of the American population will have voted.

But no candidate stepped up to claim a victory, and instead the five men and two women on the debate stage engaged in a shambolic mess of a debate that seems unlikely to have a significant effect on the state of the race, which currently favors Sen. Bernie Sanders (I-Vt.). The other candidates chasing him ― former Vice President Joe Biden, billionaire former New York Mayor Mike Bloomberg, former South Bend, Indiana, Mayor Pete Buttigieg, Sen. Amy Klobuchar (D-Minn.), billionaire investor Tom Steyer and Sen. Elizabeth Warren (D-Mass.) ― didn’t deliver the type of major moment necessary to vault themselves past Sanders in polling.

Sanders was the debate’s center of gravity, but the candidates also took plenty of time to jab at candidates who weren’t leading the race ― a telling sign of just how divided the field remains and a look at how Sanders can continue to exploit that division to rack up delegates without becoming a clear front-runner.

Sanders is getting treated like the front-runner he is.

It didn’t take long for Sanders to point out what was happening.

“I’m hearing my name mentioned a little bit tonight,” he said after fielding attacks from all his competitors on the stage.

After a decisive victory in the Nevada caucuses, a win in the New Hampshire primary and winning the popular vote in Iowa, all the Democrats on the stage agreed on one thing: Sanders is winning. And so he was treated like it, getting hit from all angles — his policy platform, his ability to govern, his electability.

“I mean, look, if you think the last four years has been chaotic, divisive, toxic, exhausting, imagine spending the better part of 2020 with Bernie Sanders versus Donald Trump,” Buttigieg said, making the case throughout the night that Sanders was simply too “radical” and polarizing to win.

Biden took his turn, saying, “Bernie, in fact, hasn’t passed much of anything,” and joining Bloomberg in taking a stab at Sanders’s record on guns — namely his votes against bills in 1993 that expanded background checks and in favor of a bill in 2003 and 2005 that protected gun companies from lawsuits.

“I passed the Brady Bill with waiting periods — I led that fight — but my friend to my right and others have in fact also gave into the gun manufacturers, absolute immunity,” Biden said, singling out Sanders. “Imagine if I stood here and said we’d give immunity to drug companies. We would give immunity to tobacco companies. That has caused carnage on our streets, 150 million people have been killed since 2007 when Bernie voted to exempt the gun manufacturers from liability.”

Sanders didn’t play the debate all that differently than in past cycles. He called his votes on guns “bad” votes, cited his “D-” rating with the NRA and stuck to his talking points, as he is known to do, until the very end.

Bloomberg still isn’t good at this.

The Bloomberg campaign, in the six days between last week’s debate in Nevada and Tuesday’s debate in South Carolina, swore up and down the former New York City mayor’s debate performance would be much improved. Even that was a low bar: Buttigieg’s campaign, somewhat fairly, labeled Bloomberg’s Nevada debate the “worst debate performance in presidential debate history” in a memo.

So, did Bloomberg deliver? Kinda. Bloomberg wasn’t the omnishambles he was in Nevada, and he wasn’t caught totally unprepared like he was last week when Warren attacked him over sexual harassment lawsuits against his company. But it would be a stretch to say Bloomberg delivered a strong debate performance, and it continued to show Bloomberg’s campaign remains better at things they can pay for than things they can’t.

During a replay of his battle with Warren over sexual harassment claims and nondisclosure agreements, Bloomberg seemed to condescend to Warren, saying “with this senator, enough is never enough.” He later came incredibly close to suggesting he “bought” control of Congress by bankrolling ads boosting House Democrats in 2018. And he had one of the most cringe-worthy lines of the cycle when he tried to deliver a self-deprecating joke about his horrid performance in last week’s debate.

“I’m surprised that all my fellow contestants up here …. I’m surprised they show up. I would’ve thought after beating them last week that they’d be a little bit afraid to do that,” he said.

Not even Bloomberg’s supporter section ― which loudly cheered almost every other thing he said ― made a peep.

Warren went there with Sanders, then returned to Bloomberg.

Warren started the debate with a more direct dig on Sanders than she’s delivered in the past.

“You know, but Bernie and I agree on a lot of things, but I think I would make a better president than Bernie,” she said not long after the debate kicked off. “And the reason for that is that getting a progressive agenda enacted is going to be really hard, and it’s going to take someone who digs into the details to make it happen.”

She cited her work to create the Consumer Finance Protection Bureau and noted she, not Sanders, came up with a detailed list of pay-fors for “Medicare for All.” “I dug in. I did the work. And then Bernie’s team trashed me for it.”

She later challenged him on his opposition to ending the Senate filibuster ― a line of attack she’s used repeatedly in recent days. But compared to how she relished attacking Bloomberg, it was clear she enjoys bashing billionaires more than she enjoys slamming her fellow progressive.

She attacked Bloomberg for backing Republicans ― including her 2012 opponent, Sen. Scott Brown ― and for blaming the end of financially redlining neighborhoods for the 2008 economic crash, and for his business ties to China. None of these attacks is likely to win Warren a huge chunk of voters or improve her standing in the polls. But her Bloomberg bashing at the last debate helped create a surge of online fundraising for her ― and that money could help her air ads to improve her position while allowing her to maintain her supersized staff.

By the end of the night, the Warren campaign had turned Bloomberg’s “enough is never enough” complaint into a T-shirt, available for just $30 on her website.

At a certain point, however, Warren will need to come head-to-head with her fellow progressive. Her campaign is counting on their early investments in Super Tuesday states to ensure that she’s one of a few candidates left standing after March 3. But if she’s not, she may regret not going harder after Sanders’s voters.

Biden can tell Steyer is coming after him in South Carolina.

In all the chaos of the night, a testy exchange between Biden and Steyer could easily be forgotten. But it was an important one.

Biden brought up an investment in private prisons Steyer made in 2004. He “bought a system that was a private prison system, after, after he knew that, in fact, what happened was, they hog-tied young men in prison here in this state,” Biden said. “They, in fact, made sure that, in Georgia, they did not have health care for the people who were being held. They, in fact, went on, and he said, after he knew that, he bought it. And then he said he was proud of his accomplishment.”

It prompted a testy exchange between the two, accusing each other of talking over time until finally Steyer responded.

“I bought stock in a prison company thinking they would do a better job. And I investigated. And I sold it,” Steyer said. “And, in fact, since then, I have worked to end the use of private prisons in my home state, and we have ended it. I have started a bank to support Black ownership of businesses, women ownership of businesses and Latino owners of businesses because this financial service industry is prejudiced.”

“I have worked tirelessly on this. And you know I’m right. You wrote the crime bill that you called …” Steyer continued, trying to hit Biden for his role in the crime bill that led to a disproportionate number of Black and brown Americans being incarcerated.

“Where we come from, that’s called Tommy-come-lately,” Biden retorted, cutting Steyer off.

Steyer has yet to make a name for himself on the national stage and doesn’t have any clear path to the presidency. But Biden, who said explicitly on the debate stage that he is going to win Saturday in South Carolina, decided to go after him anyway because Steyer has the potential to cut into Biden’s lead in South Carolina.

The California billionaire has poured millions into the state, his campaign has a large staff organizing voters in South Carolina and he is polling in the top three consistently. And though other candidates, such as Sanders, Warren and Buttigieg, have all polled consistently in the state for months, Steyer’s and Biden’s numbers have been fluctuating.

When Steyer is up in a poll, Biden is down. And vice versa. It’s no wonder Biden, who has put a lot of emphasis on the importance of him winning South Carolina for his campaign, wants to take a punch at Steyer. 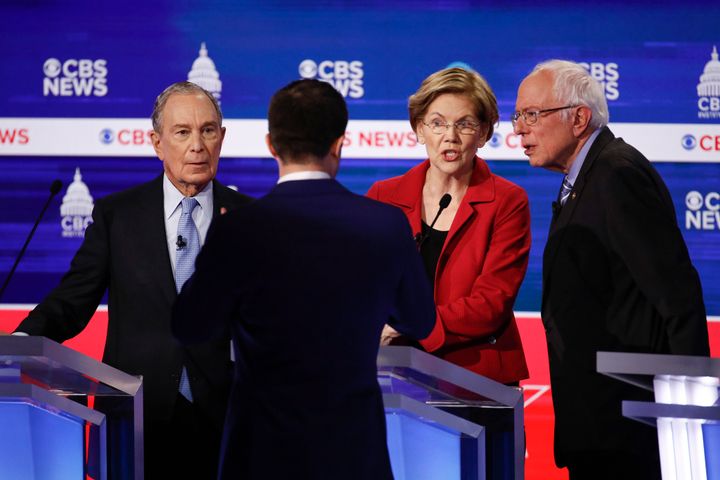 Buttigieg keeps the focus on Sanders.

Of all the candidates, only Buttigieg seemed to be able to remember that Sanders was the front-runner for the full two hours.

From the start of the debate, the former South Bend mayor repeated what has been his case against Sanders: that the Vermont senator would be just as radical for the Democratic Party as Trump has been for Republicans — and therefore unelectable.

On several occasions, Buttigieg would talk over Sanders as the senator was delivering his talking points, making the debate unintelligible. When he had the floor to himself, Buttigieg’s attacks were pointed.

“I want to come back to this question about the filibuster because this is not some long-ago bad vote that Bernie Sanders took, this is a current bad position that Bernie Sanders holds,” Buttigieg said, attacking the Sanders position on upholding a Senate rule that makes it virtually impossible to pass anything without 60 votes. “How are we going to deliver a revolution if you won’t even support a rule change?”

He later was asked a question about Syria and made the night’s biggest pivot, attacking Sanders over his support for Medicare for All. It was jarring but also displayed just how determined he was to confront the Vermonter, even though he famously wrote an essay praising Sanders when he was just 18 years old.

Buttigieg had a strong start in the Democratic primaries, winning the delegate count in Iowa and coming in a close second in New Hampshire. But his electoral prospects don’t look as bright in the increasingly diverse states ahead, and he needs to convince anti-Sanders forces, especially donors, that he has a better shot than Bloomberg or Biden to defeat Sanders one-on-one. (In a memo released before the debate, Buttigieg’s campaign said he needed to raise $13 million between Nevada and Super Tuesday to stay competitive.)

Trump Campaign Burned Through Almost Half Its Cash in September