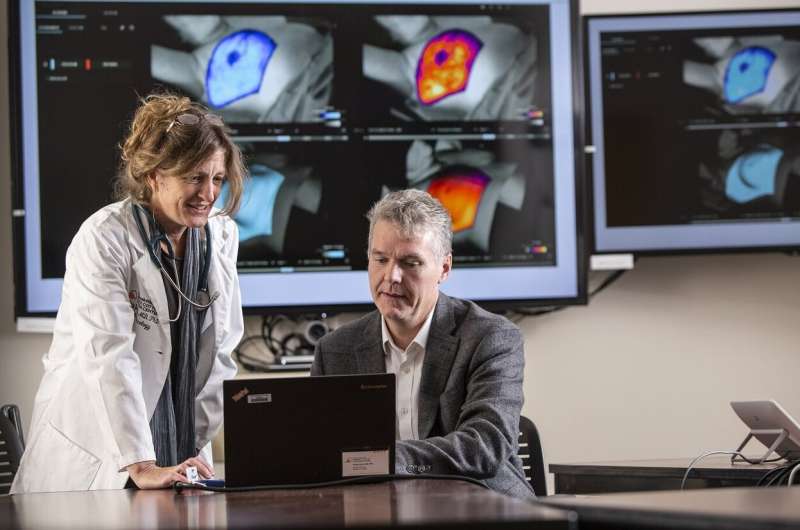 Cherenkov imaging makes radiation treatment a visual process. The Cherenkov effect occurs when photon or electron radiation beams interact with tissue, such as skin, producing a small light emission from the surface. BeamSite cameras can capture images of the treatment-beam shapes in real time, as well as show levels of intensity that are proportional to the radiation dose. These visual data can be used to verify both accuracy of dose and of beam delivery at each daily treatment, a verification not possible using standard quality assurance measures.

“Cherenkov imaging provides visualization of the radiation therapy treatment, so that the treatment team can see everything, and make adjustments when unexpected things happen,” explains Brian Pogue, Ph.D., co-director of the Translational Engineering in Cancer Research Program at NCCC, MacLean Professor of Engineering Sciences at Dartmouth Engineering and co-founder of DoseOptics, LLC. A joint engineering and oncology team reviewed events recorded in their Cherenkov imaging study over the course of a few years, during which they documented incidents when radiotherapy delivery was not ideal and the adjustments made to rectify. Their findings, “Initial Clinical Experience of Cherenkov Imaging in External Beam Radiation Therapy Identifies Opportunities to Improve Treatment Delivery,” have been published in The International Journal of Radiation Oncology, Biology, Physics.

There were a total of 64 patients in the study, under the supervision of radiation oncologist and lead author Lesley Jarvis, MD, Ph.D., Member of NCCC’s Translational Engineering in Cancer Research Program and Associate Professor of Medicine at the Geisel School of Medicine at Dartmouth. The patients were receiving treatment for breast cancer, sarcoma, lymphoma and other cancers. Six patients were found to indicate that adjustments would have improved treatment, such as stray radiation dose exposure to the opposite breast, arm or chin during breast cancer treatments. The imaging system was also used to identify when inadvertent dose was not an issue, such as confirming no unintended exposure of the opposite leg during an extremity sarcoma treatment.

Radiation therapy is a repetitive procedure given to patients daily for about 30 days. Setting patients up on the treatment couch and daily alignment of the beam is a complex process. Beyond positional complications, the therapy team has to leave the room when the beam is on, so if anything happens during delivery, problem-solving tools are very limited. National statistics show that incidents of incorrect delivery might occur on a level of about 1%. In a busy clinic, this could mean one patient per week. “Normally the treatments are just fine,” says Pogue. “However, if you cannot see where the beam is, then it is a blind treatment, and the interaction between patient and therapy team is just less natural than it could be if the treatment was visual.”

NCCC is currently the only cancer center in the world with regular use of Cherenkov imaging in all radiotherapy treatments, and was uniquely positioned for clinical research teams to test out these cameras for the planned study. Cherenkov imaging cameras have been installed in most linear accelerators within Dartmouth-Hitchcock, providing an extra level of safety during each patient’s therapy session. “Cherenkov cameras mounted inside the radiotherapy treatment rooms give us the ability to simply see the treatment and provide an intuitive guide to therapists that we otherwise wouldn’t have had,” says Pogue. “This is a terrific tool for tracking what happens each day and in each treatment, and for improving the quality of radiotherapy delivery.”

Latest Posts
Future Mars trips will require huge shifts in spacecraft propulsion, with NASA and startups working on a fix
Video captures the moment a missile fired at the capital of Saudi Arabia by Iran-backed fighters is intercepted
MSNBC’s Chris Hayes: CPAC Reveals A GOP Fixated On ‘Cultural Grievance’ Over Policy
The US just authorized a 3rd coronavirus shot, adding a convenient, single-dose option to boost the rollout
Roger Stone, at CPAC, says he'd back Trump in 2024 but warns Dems, media will try to 'bury' accomplishments
Recent Posts