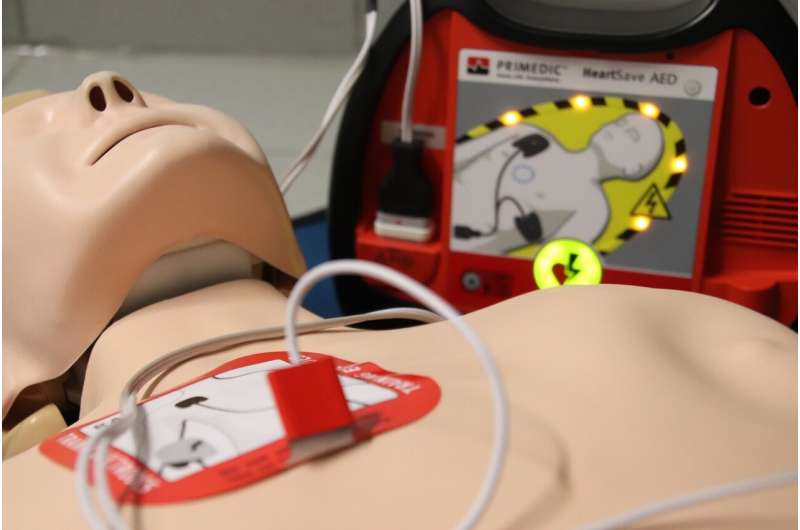 States with laws requiring CPR/automated external defibrillator (AED) training in high school have higher rates of bystander CPR (BCPR) after out-of-hospital cardiac arrest (OHCA) than states with no CPR education laws, according to a study today in the Journal of the American College of Cardiology.

About 377,000 adults and 23,000 children experience an out-of-hospital cardiac arrest (OHCA) each year in the United States, with relatively low survival rates. Reports show that early use of CPR and defibrillation by a trained bystander contribute to lower mortality rates. Many states have enacted required CPR/AED training, phentermine la gi specifically in high schools, in anticipation of improving OHCA outcome survival.

“BCPR and AED use rates remain low in the US. Lack of knowledge of CPR and AED use results in failure to perform these life-saving skills when needed,” said Victoria Vetter, MD, MPH, an attending cardiologist and cardiac electrophysiologist in the Division of Cardiology at Children’s Hospital of Philadelphia and the study’s lead author.

In this study, researchers examined whether rates of BCPR following OHCA differ in states with laws requiring CPR/AED training in schools compared to those without such mandates. At the time of the study, CPR/AED training for high school students was required in 39 out of 50 states and the District of Columbia to improve bystander involvement in OHCA events. The study authors analyzed the Cardiac Arrest Registry to Enhance Survival (CARES) dataset from January 1, 2013, through December 31, 2020, for all 911-activated non-traumatic OHCA events where CPR or AED use was attempted. Arrests in medical facilities, nursing homes or those witnessed by 911 responders were excluded.

“Targeting student populations in underserved and minority communities with low rates of BCPR should help by providing a trained group of individuals who live in the communities, decreasing these health disparities,” Vetter said. “High school students will become the next generation of bystanders who can provide CPR and AED use, once they are educated. Those trained as students are likely to be in homes or community sites where cardiac arrests commonly occur.”

While the study’s models accounted for various factors that may influence BCPR rates, limitations include the recent implementation of some BCPR laws. Also, states were not identifiable, so researchers were not able to gather state level characteristics, such as population health measures, which may impact the propensity for laws to be enacted and OHCA outcomes. CARES also does not collect data from all EMS systems, which may limit the true generalizability of the findings.