Has work got you down? Try a standing desk: Study finds they make staff happier and fitter

Using a standing desk could help slash sitting time by more than an hour a day among office workers and make them happier, a study suggests.

A team of UK researchers monitored the sitting habits of nearly 800 office workers.

Those who stood in meetings and had printers and bins moved further from their desks sat for 20 minutes less per per day.

But volunteers who followed these habits and used a standing desk saw their sitting time drop by over an hour per day.

The findings, published in The British Medical Journal, show changes at work encourages staff ‘work less and move more’, according to the authors.

Participants even reported small improvements in their wellbeing, energy at work and stress levels. 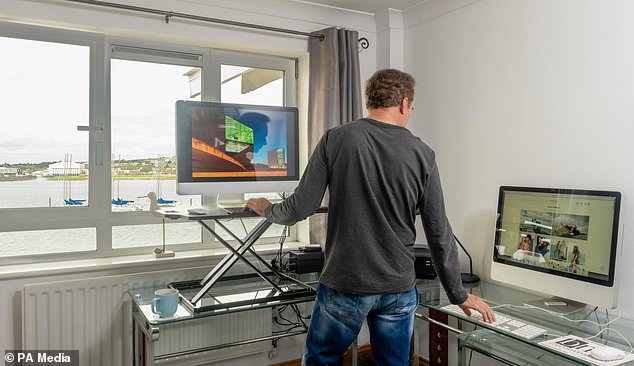 A team of UK researchers monitored the sitting habits of nearly 800 office workers. Those who stood in meetings and had printers and bins moved further from their desks sat for 20 minutes less per per day. But volunteers who followed these habits and used a standing desk saw their sitting time drop by over an hour per day

There is a growing body of evidence that sitting down too much is a risk to health.

Britons are advised to cut the amount of time they sit for and exercise for at least 150 minutes per week.

Studies have linked being inactive with being overweight and obese, type 2 diabetes, nc state nuclear medicine technologist some cancers and early death.

Sitting for long periods is thought to slow the metabolism, which affects the body’s ability to regulate blood sugar, blood pressure and break down body fat.

Many adults in the UK spend around 9 hours a day sitting. This includes watching TV, using a computer, reading, doing homework, travelling by car, bus or train but does not include sleeping.

Health chiefs recommended breaking up long periods of sitting with just one or two minutes of activity.

But they say there is not enough evidence to set a time limit on how much time people should sit each day.

Previous studies have shown that office-based staff spend about three-quarters of their work day and two-thirds of their waking day sitting.

Spending too much time sitting has been linked with heart disease, type 2 diabetes, some cancers and higher rates of depression and anxiety.

As a result some companies have opted to buy height-adjustable desks for staff, offering desk-bound staff the chance to sit or stand during their working day.

Researchers, led by Leicester University, recruited 756 local Government workers from Leicester, Greater Manchester and Liverpool to assess the impacts of the desks, along with other steps of encouraging more movement.

At the start of the study, the council workers, who were aged 45 on average, spent most of their days sitting.

A third of participants were given a sit-stand desk and followed a plan to move more, a third just followed the plan, while the remainder worked as normal.

The plan — called Smart Work and Life (SWAL) — sees workers reduce their sedentary time, break up sitting in and out of the office and given access to information and apps.

It also involves changing the office environment to encourage less sitting, such as ‘standing meetings’ and moving bins and printers to encourage more movement.

The researchers measured the workers’ sitting time using an accelerometer device on their thigh for 24-hours a day to track their movement.

It was worn at the start of the study for eight days and again a year later.

The results show that those who took part in the plan alone sat for 22 minutes less per day, on average, compared to those who did not change their behaviour.

And those who followed SWAL and used an adjustable desk reduced sitting time by 64 minutes a day — three times more than the plan alone — compared to those who continued as normal.

The researchers also reported ‘small improvements’ in stress, wellbeing and energy levels at work among those who changed their habits.

However, they noted that these improvements ‘were not clinically meaningful’.

And no improvements in sedentary behaviour were noticed outside of work hours.

The team said office-based workers spend most of their working day sitting and also show high levels of sitting time outside of work.

Being seated for too long is linked with chronic diseases, premature mortality, along with poor physical strength, health and job performance, they said.

The researchers wrote: ‘The SWAL intervention (with and without a height adjustable desk) was effective in reducing daily sitting time.

‘The SWAL plus desk intervention was three times was more effective at reducing sitting time than the SWAL intervention.’

Professor Cindy Gray, a health and behaviour expert the University of Glasgow who was not involved in the study, said that the findings suggests height adjustable desks ‘may be important to deliver clinically relevant health benefits’.

But she highlighted that many of the participants replaced sitting with standing, when ideally people would be using the opportunity to move more.

And the pattern of more people working at home following the pandemic will ‘likely to increase workforce sedentariness’, Professor Gray said.

So it is ‘essential’ that experts find ways to make people ‘sit less and move more around their home during both work and non-working hours’, she added.