Millions of people every year travel to high altitude for a multitude of reasons including leisure, sports and long-term relocation, and the number of people travelling to high altitudes is only expected to increase with the growth of ecotourism and global adventure travel.

Altitude sickness is a range of pulmonary and cerebral conditions caused by hypoxia (oxygen deprivation) due to rapid ascent and poor pre-acclimatization to high altitudes. There are three types of altitude sickness, increasing in severity. 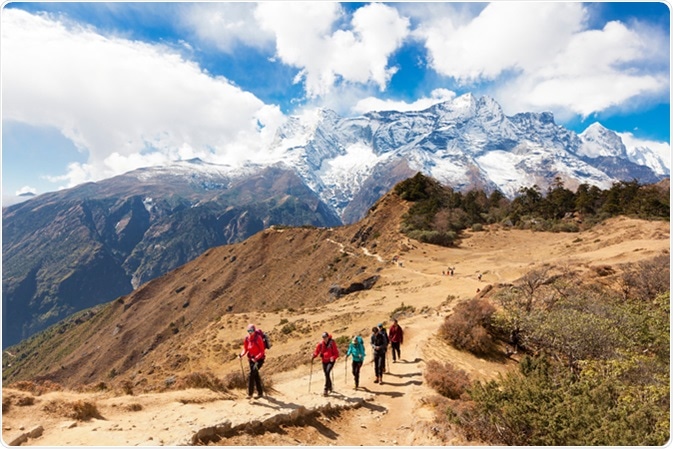 AMS is the most common form of altitude sickness. Symptoms of AMS are:

In HACE, the brain ceases to function normally due to an accumulation of excess fluid.

HAPE is related to HACE. Fluid enters the lungs due to leaks caused by excessive hypoxia.

The risk of developing altitude sickness between the genders is believed to be equal, but some observational studies have shown that women have a slightly higher risk than men.

Similarly, there is little to suggest that incidence rates increase with age. One uncontrolled study suggested that younger people might be at higher risk, reporting that eighteen to nineteen-year olds had an incidence rate of 45%, meanwhile individuals between 60 and 87 years of age only reported a 16% incidence rate. It is thought that the results reflect the higher exercise intensity with younger people.

At high altitude, an individual’s ability to exercise decreases. This is because the ventilatory response usually sufficient at sea-level to maintain good blood oxygen saturation is no longer possible due to the decreased oxygen levels at high altitude. Although those who are already in good physical health are better able to adapt to these changes during rapid ascent, data suggest that their risk of AMS is similar to individuals in poorer physical health.

Those with pre-existing diseases should show due caution when considering ascents to altitude. Those with heart failure are not advised to spend time in the hypoxic conditions of high altitudes. Although it is natural to believe that lung disease will rule out the possibility of high altitude travel, it is possible for individuals to travel to altitude following thorough evaluations and adequate prophylactic measures put in place before travel. This ensures the pre-existing condition is not worsened by the ascent and  prevents altitude sickness.

People travelling to high altitudes who usually live at sea-level are more susceptible to AMS than those who normally live at higher elevations.

Communities that have lived at altitude for thousands of years have developed particular genetic characteristics to cope with the conditions, such as higher haemoglobin concentration or higher ventilator responses. As no specific genetic factors contributing to AMS incidence have been concretely identified, this is an area of particular interest and is the subject of a lot of current research.

While the main cause of altitude sickness is poor pre-acclimatization and rapid ascent to high altitudes, there is little to suggest any particular demographic is significantly more susceptible than another. No significant differences between men and women or ages have currently been identified, and genetic reasons for suffering AMS are being actively investigated.

Lois is a freelance copywriter based in the UK. She graduated from the University of Sussex with a BA in Media Practice, having specialized in screenwriting. She maintains a focus on anxiety disorders and depression and aims to explore other areas of mental health including dissociative disorders such as maladaptive daydreaming.