The vitreous body is a round body of gel-like substance which fills the posterior chamber of the eye and aids in keeping the eyeball round. Within the gel are numerous fine strands which run to the retinal layer just behind it. The vitreous shrinks with age and some disease conditions, becoming more watery. As a result it pulls away from the retina, eventually breaking the strands. This is known as vitreous detachment.

Vitreous detachment is a condition in which the posterior layer of the vitreous (posterior vitreous cortex), which is made up of a dense network of type II collagen, tears away from its attachment to the internal limiting layer of the retina. In two-thirds of cases it occurs in elderly patients (over the age of 65 years).

This is also called posterior vitreous detachment (PVD), side effects of stopping lamictal and is initiated at the posterior pole of the eye. When it is not hindered in any way, the patient notices only that more floaters have appeared in the field of vision. These are tiny black specks darting about the field of vision in accordance with eye movements, but never coming into the line of focus.

They are actually shadows cast by the clumps of cells or coarser fibers in the shrinking vitreous. In a few cases, the individual may notice ‘lightning streaks’ or flashes of light in the periphery of the field of vision. However, in some cases the forward progression of the detachment reaches a place where there is firm adherence between the vitreous and the underlying retina. In this situation continuing traction may lead to retinal tears.

Risk factors for vitreous detachment include a history of PVD in the other eye, as well as myopia and old age. Complications include macular hole, or retinal detachment, and vitreous hemorrhage. All of these interfere severely with vision. In uncomplicated cases, vitreous detachment causes no loss of sight nor interferes with normal vision. 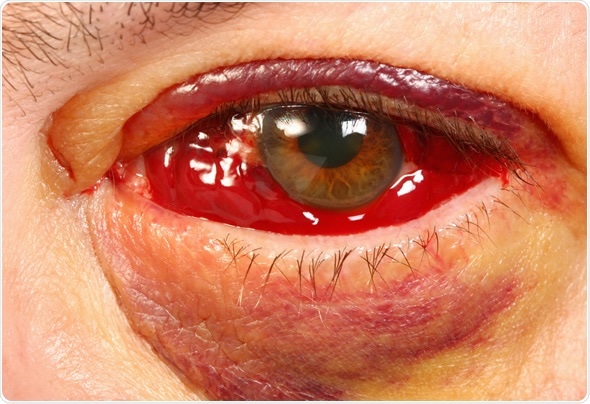 According to Kakehashi et al, posterior vitreous detachment may be classified depending on the presence and extent of collapse of the detached vitreous body.

This is seen in 80% of high myopes, it occurs mostly in older age groups.

This is associated with central retinal vein occlusion or uveitis.

Partial PVD and Thickening of the Posterior Vitreous Cortex

This occurs in 90% of patients who have proliferative vitreoretinopathy associated with diabetes mellitus.

This is seen as an age-related change.

Treatment with ocular exercises, or dietary modification including supplementation, has not proved fruitful. Lasers have been used to remove the floaters but there are significant associated risks and not much benefit seen.

Surgical removal of the vitreous (vitrectomy) is another way to reduce the number of floaters but it is not in routine use due to the associated complications and risks.