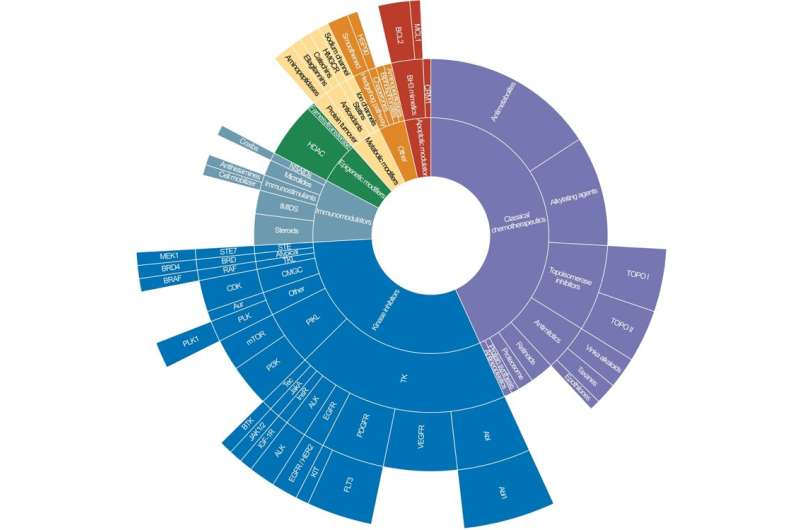 Standard therapy for advanced recurring aggressive, hematological malignancies, such as leukemias and lymphomas, have a limited effect with patients experiencing short survival times. A study at the Vienna General Hospital conducted by physicians and scientists from Medical University Vienna and the CeMM Research Center for Molecular Medicine (CeMM), as well as ETH Zurich for the first time demonstrated that therapy selection based on results from a functional test is clinically possible and effective in patients with recurrent hematologic cancers. The researchers quantified drug effects on single cells from real-time patient biopsies using a novel experimental technique, resulting in 56 patients receiving individually tailored treatment—with significant positive outcome. The work is published in Cancer Discovery.

The central aim of personalized medicine is to find the right treatment for the right patient at the right time by analyzing and using specific characteristics of the patient’s tumor. Until now, personalized therapy-matching has been primarily done based on genetic biomarkers. However, these provide treatment options for less than 10 percent of cancer patients. On the other hand, functional precision medicine (FPM) utilizes functionally evaluates the efficacy of numerous drugs directly on cancer cells, similar to the testing of antibiotics in an antibiogram.

This study tested a novel approach of FPM, specifically termed single-cell functional precision medicine (scFPM), where the response to drugs on healthy and malignant cells, isolated from freshly removed tissue from cancer patients, is investigated with an in-depth analysis. Consequently, the method facilitates identification of drugs that show cancer cell specific efficacy, while plausibly exhibiting a reduction in side effects. High precision of this platform is achieved with automated high-content microscopy and computerized image analysis, formerly called pharmacoscopy.

“We examined patients’ tumor cells of real-time biopsies and directly tested the effects of more than 130 candidate compounds to determine which therapy would be effective in each patient,” said principal investigator of the study, Philipp Staber, associate professor at the Clinical Department of Hematology and Hemostaseology at MedUni Vienna and the Vienna General Hospital and a member of the Comprehensive Cancer Center (CCC). “To test the individual benefit of patients, the response time to therapy was compared with that to their respective prior therapy. 54 percent of our patients had a significant, at least more than 30 percent prolonged time of progression-free survival under the scFPM-guided therapy. 21 percent of all patients even showed a long-term response. Our study demonstrates that individual therapy tailoring is feasible, and effective in breaking resistance to prior therapies,” says Staber.

The image-based scFPM approach was developed in the research group of CeMM Principal Investigator and Scientific Director Giulio Superti-Furga, also professor of molecular systems biology at the MedUni Vienna. Superti-Furga says, “We wanted to enable true personalized medicine in cancer treatment. For years, many, like us at CeMM and MedUni Vienna, have been working on ever-improving molecular profiles of genes, proteins and metabolites that should facilitate individualized treatment of patients. But the approach used here is a kind of a shortcut. We’re directly testing which drug actually works on the cancer cells. The idea of personalized cancer medicine is far from new. But many years of research have gone into developing technology behind analyzing tumor tissue in such a way that therapy-relevant information can be extracted. Today, we can perform single-cell analyses of patient samples with unprecedented resolution and precision, observe individual immune cell interactions, and thus test the effect of an enormous variety of drugs.”