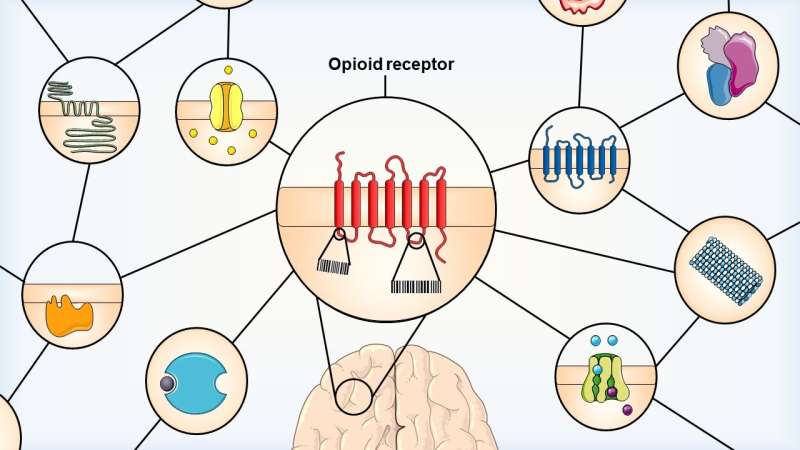 Opioid receptors are proteins in the central nervous system that are targeted by opioid drugs for pain relief. There are three subtypes of opioid receptors, MOP, DOP and KOP, buy generic zyloprim online in addition to the opioid-related NOP receptor.

The most prescribed opioids, such as morphine, fentanyl and codeine, target μ opioid receptors (MOP). In recent years, however, many neuroscientists have also been investigating the therapeutic potential of drugs that target the other subtypes of opioid receptors.

Past research suggests that the δ-opioid receptor (DOP) could be a particularly promising therapeutic target for chronic pain management drugs. In fact, substances targeting DOP receptors appear to have fewer adverse effects than commonly used opioids, while still providing relief for pain associated with inflammation, diabetes, cancer and other health conditions.

Researchers at Université de Sherbrooke in Canada have recently reviewed these past findings with the aim of painting a more exhaustive picture of the mechanisms governing the trafficking of DOP receptors. Their paper, published in the Journal of Neuroscience Research, summarizes what is currently known about the amino acid patterns involved in the regulation of different opioid receptors’ trafficking.

“Over the past several years, we have been interested in the molecular mechanisms underlying the distinctive regulation of the δ-opioid receptor, a promising pharmacological target for the treatment of chronic pain as well as various mood/psychiatric disorders,” Louis Gendron, one of the researchers who carried out the study, told Medical Xpress. “Although DOP shares high homology with the other opioid receptor subtypes, this receptor displays very unique characteristics regarding its subcellular localization and intracellular trafficking.”

The mechanisms underlying the intracellular trafficking of opioid receptors are known to depend on the receptors’ interactions with regulatory proteins. Therefore, Gendron and his colleagues set out to delineate the similarities and dissimilarities between amino acid sequences and motifs (or “barcodes”) that could explain the differences between DOP receptors and other opioid receptors.

“Given their distinctive characteristics, many studies have used DOP and MOP as model receptors for the study of trafficking mechanisms,” Gendron explained. “We thus took advantage of these comparative studies to highlight and discuss the differences between both receptors.”

Gendron and his colleagues also reviewed studies that investigated the trafficking of other G protein-coupled receptors (GPCRs), as the “barcodes” identified in these studies could also be relevant to the opioid receptor physiology. Although less is known about the regulation of their trafficking, the team also discussed the trafficking of kappa (KOP) and nociceptin (NOP) receptors.

“While writing our review, we kept in mind that our analysis and mapping of the known recognition and regulatory motifs (“barcodes”) could help future investigations of these important receptors,” Gendron said.

The literature review authored by this team of researchers could have important implications. Most notably, it identified a new series of potential “barcodes” that could be specific to each opioid receptor subtype, which could be further examined in future studies.

“Although further research will be needed to validate our predictions, we think that our analysis could help guide future investigations,” Gendron said.

In the future, the researchers’ paper could prove to be a valuable resource for neuroscientists investigating the trafficking of opioid receptors and of GPCRs in general. In fact, other receptors in the central nervous system could be regulated by cellular mechanisms that resemble those outlined by Gendron and his colleagues.