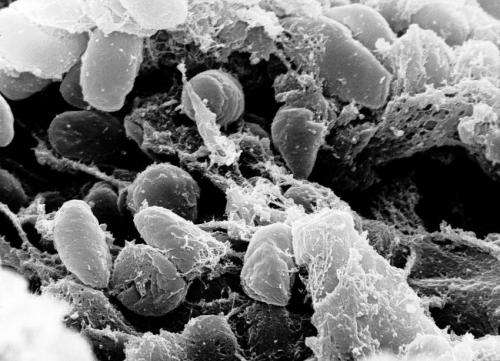 Although the world is focused on the COVID-19 pandemic, there are many other dangerous pathogens still out there, like Yersinia pestis, which causes plague—the deadly disease that killed tens of millions of people during the infamous Black Death in the 14th century. Although plague has been largely eradicated in the developed world, it still affects hundreds of people globally each year.

When a human is infected with bubonic plague from a flea bite and it goes untreated, the infection can progress and spread to the lungs, actoplus met for pcos resulting in pneumonic plague. The most feared clinical form of plague, pneumonic plague is typically lethal if not quickly treated, and infected patients can transmit the disease to others via respiratory droplets. A team of scientists from Northern Arizona University’s Pathogen and Microbiome Institute, led by professor Dave Wagner, recently published their findings from a remarkable study involving antimicrobial resistant (AMR) plague.

Although pneumonic plague outbreaks are now extremely rare, scientists consider plague to be a reemerging and neglected disease, particularly in the East African island country of Madagascar, which reports the majority of annual global cases. With no vaccine against it, preventing mortality from plague requires rapid diagnosis followed by treatment with antibiotics. An AMR strain of Y. pestis—resistant to the antibiotic streptomycin, usually the first-line treatment for plague in Madagascar—was isolated from a pneumonic plague outbreak that occurred there in 2013, involving 22 cases, including three fatalities.

“By characterizing the outbreak using epidemiology, clinical diagnostics and DNA-fingerprinting approaches,” Wagner said, “we determined—for the first time—that AMR strains of Y. pestis can be transmitted person-to-person. The AMR strain from this outbreak is resistant to streptomycin due to a spontaneous point mutation, but is still susceptible to many other antibiotics, including co-trimoxazole. Luckily, the 19 cases that were treated all received co-trimoxazole in addition to streptomycin, and all of them survived.