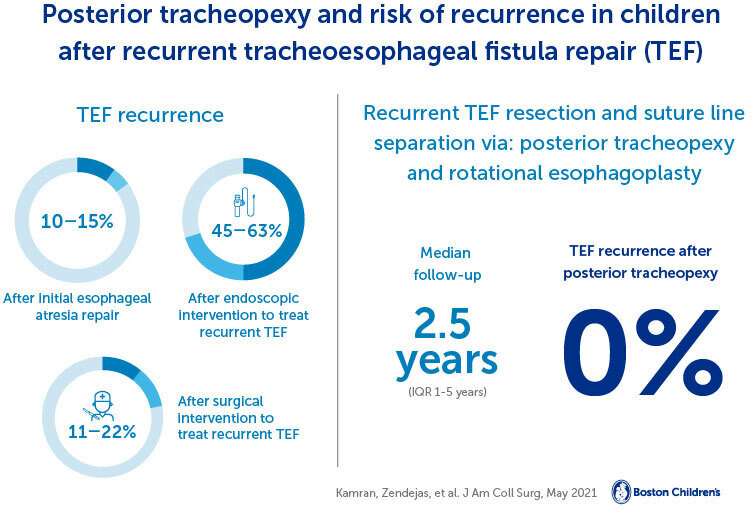 A tracheaesophageal fistula (TEF) is a congenital defect in which an abnormal connection forms between a child’s esophagus and trachea. It often occurs with esophageal atresia. Even after surgical repair, TEFs recur in about 10 to 15 percent of infants and children. They rarely close spontaneously and typically require surgical or endoscopic intervention.

In an effort to avoid a repeat operation and its potential risks, most recurrent TEFs are treated with a variety of endoscopic treatments. Unfortunately, these often require multiple procedures, and the success rate is low to moderate at best. Surgical interventions have also been fraught with risk of re-recurrence, making it difficult for physicians to select the best treatment. To address this challenge, the surgeons in the Esophageal and Airway Treatment (EAT) Center at Boston Children’s Hospital have developed an innovative approach to treat recurrent TEFs with a posterior tracheopexy.

In this procedure, the surgeon divides the TEF, repairs the esophagus and trachea, and sutures the back wall (or membranous portion) of the patient’s trachea to the anterior longitudinal ligament of the spine. The esophagus is rotated into the right chest as well, is there a generic for cymbalta 30 mg a procedure known as rotational esophagoplasty. By doing this, the esophageal and tracheal suture lines are separated entirely, which eliminates the risk of re-recurrence.

“By performing a posterior tracheopexy after the division and repair of the recurrent TEF, we take advantage of the child’s own tissue and nearby structural support provided by the spine to completely separate the suture lines and prevent re-recurrence,” says Benjamin Zendejas-Mummert, a surgeon on the EAT team. “This also avoids the need to interpose tissue (muscle or pleural flaps) or prosthetic material (mesh) between the suture lines, a commonly used strategy that comes with its own set of complications and does not completely eliminate the risk of re-recurrence.”

To assess the operative risks and long-term outcomes of the use of posterior tracheopexy in the treatment of a recurrent TEF, Boston Children’s EAT team members reviewed the records of 62 patients with a median age of 14 months who had a recurrent TEF and were treated with a posterior tracheopexy and rotational esophagoplasty. Twenty-four of these patients had previously undergone failed surgical or endoscopic attempts at TEF repair.

The team found that after a median follow-up of 2.5 years, all of the patients’ symptoms had resolved and no TEFs had recurred. The procedures were associated with three esophageal leaks and one transient vocal cord dysfunction, all of which were treatable without the need for a reoperation. The results were published online in the Journal of the American College of Surgeons.

where to buy cheap zithromax uk without prescription