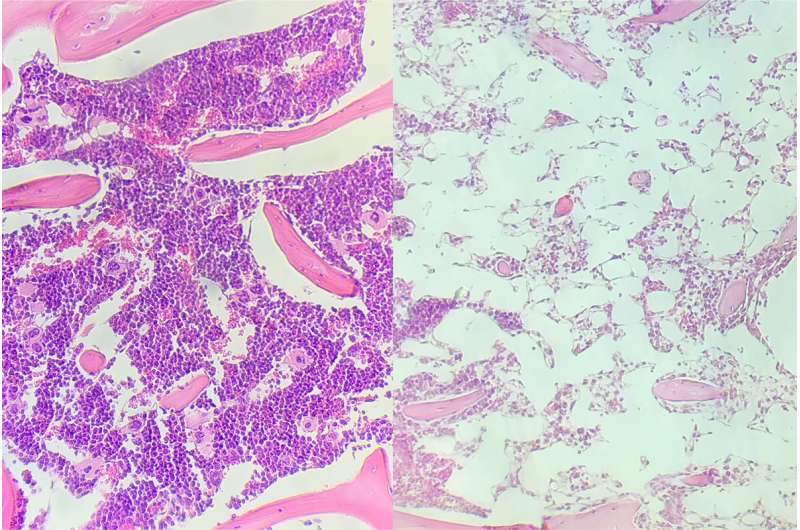 For hard-to-treat leukemias, lymphomas and other blood cancers, stem cell transplantation is the gold standard of care. The procedure involves replacing a patient’s own blood-forming stem cells with a donor’s stem cells, and in the process, eradicating cancer cells in the blood, lymph nodes and bone marrow.

But many patients with such deadly blood cancers are too fragile to undergo stem cell transplants. That’s because a patient’s stem cells first must be destroyed by intensive chemotherapy and sometimes total body radiation before a donor’s stem cells are infused. This so-called conditioning regimen makes space for incoming donor stem cells, helps to remove cancer cells remaining in the body, and depletes the patient’s immune system so it can’t attack the donor’s stem cells. However, toxicities and suppression of the immune system caused by conditioning regimens puts patients at high risk of infections, organ damage and other life-threatening side effects.

Now, studying mice, researchers at Washington University School of Medicine in St. Louis have developed a method of stem cell transplantation that does not require radiation or chemotherapy. Instead, the strategy takes an immunotherapeutic approach, combining the targeted elimination of blood-forming stem cells in the bone marrow with immune-modulating drugs to prevent the immune system from rejecting the new donor stem cells. With the new technique, mice underwent successful stem cell transplants from unrelated mice without evidence of dangerously low blood cell counts that are a hallmark of the traditional procedure. The data also suggested that such stem cell transplants can be effective against leukemia.

The study, available online in the Journal of Clinical Investigation, opens the door to safer stem cell transplantation, meaning more patients with various types of blood cancers could receive this potentially curative therapy, and it could be considered as a treatment for other diseases, such as sickle cell anemia or other genetic disorders, that are less life-threatening.

“To be able to do a stem cell transplant without having to give radiation or chemotherapy would be transformative,” said senior author and medical oncologist John F. DiPersio, MD, Ph.D., the Virginia E. & Sam J. Golman Professor of Medicine and chief of the Division of Oncology at Washington University School of Medicine. “It could eliminate the dangerously low blood cell counts, bleeding complications, organ damage, and infections. It has particular implications for conducting bone marrow transplantation or gene therapy for patients with noncancerous diseases such as sickle cell anemia, where the toxicities of chemotherapy- or radiation-associated conditioning are important to avoid. We have more work to do before we’re ready to translate these findings to people, but we’re encouraged by the results of this study.”

As an alternative to high-dose chemotherapy and whole-body radiation, DiPersio—who also directs the Center for Gene & Cellular Immunotherapy—and his colleagues harnessed drugs that are toxic to cells, and attached these drugs to antibodies that target specific surface proteins that are expressed primarily on bone marrow stem cells. Only when these antibody-drug conjugates (ADCs) bind to those specific proteins are they then internalized by the stem cells, which leads to release of the drug payload inside the cell and, ultimately, cell death. Using the ricin derivative saporin as the drug payload, the researchers generated two different ADCs to target two specific proteins found on the surface of blood stem cells, which minimizes the potential for them to cause damage to other cell types.

To prevent the recipient’s immune system from then rejecting the donor cells, the researchers treated the mice with immunosuppressive compounds called Janus kinase (JAK) inhibitors. In this study, the investigators primarily used baricitinib, which is approved by the Food and Drug Administration to treat rheumatoid arthritis. They found that baricitinib prevented the recipient’s immune cells, including T cells and natural killer cells, from attacking the donor stem cells.

“By combining the antibody-drug conjugates with JAK inhibitors, we were able to achieve a successful transplant between two completely unrelated strains of mice,” said first author Stephen P. Persaud, MD, Ph.D., an instructor in pathology & immunology. “A successful transplant across such a stringent immunological barrier is promising for eventually being able to harness this technique for patients with leukemia.”

The researchers also found that the new technique struck a balance between the donor immune cells attacking leukemia cells—called the graft-versus-leukemia effect—in a common mouse model of leukemia and not attacking the recipient’s healthy tissues, a dangerous condition called graft-versus-host disease. The mice in this study did not develop graft-versus-host disease because the immune suppressing drugs prevented it, another unique and significant advantage of this approach, according to the researchers.

“When you give JAK inhibitors from the beginning, there is evidence that they prevent graft-versus-host disease from developing later,” said DiPersio, who serves as deputy director of Siteman Cancer Center at Barnes-Jewish Hospital and Washington University School of Medicine. “In addition, unlike a regular transplant using radiation and chemotherapy as transplant conditioning, none of the mice developed any reduction in their blood counts, which is the major life-threatening complication of traditional stem cell transplants. Chemotherapy and radiation destroy all the old cells at once. With the new strategy, the old cells were slowly replaced by donor cells, and so we never saw any drop in the blood cell counts in these mice. The blood cell counts looked normal the whole way, and in the end, we could see that all the blood cells originated from the new donor cells.”

After a period of time, the researchers found that they could gradually reduce the JAK inhibitors, and once the donor stem cells totally replaced the original cells, stop the immune suppression altogether.

“We’ve shown that we can use this relatively simple regimen that is minimally toxic to transplant donor stem cells across immunologic barriers in mice,” Persaud said. “We need more research to see if the same strategy will be applicable to humans. We are working to optimize the technique in mice, and then we will likely test it in other animal models of leukemia before we would begin planning a clinical trial to investigate the strategy in patients.”