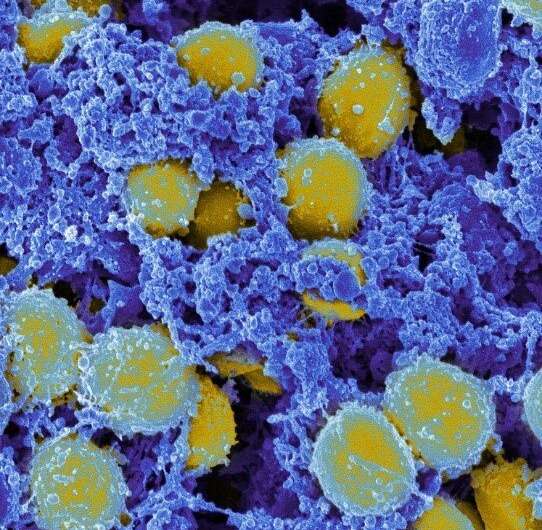 In what turned out to be one of the most important accidents of all time, Scottish bacteriologist Alexander Fleming returned to his laboratory after a vacation in 1928 to find a clear zone surrounding a piece of mold that had infiltrated a petri dish full of Staphylococcus aureus (S. aureus), selegiline atypical depression a common skin bacterium he was growing.

That region of no bacterial growth was the unplanned birth of a medical miracle, penicillin, and would lead to the era of antibiotics. Now, in a paper published today in the journal Science Translational Medicine, researchers at Johns Hopkins Medicine have announced another accidentally discovered, potentially game-changing treatment—one that may provide an alternative immune-based solution to the danger of antibiotic-resistant bacterial infections.

And like Fleming’s surprise finding, the bacterium of note is once again S. aureus—but this time, methicillin-resistant Staphylococcus aureus, the life-threatening strain unharmed by methicillin and other antibiotics, and better known by its acronym, MRSA.

The paper’s senior author, Lloyd Miller, M.D., Ph.D., former professor of dermatology, infectious diseases and orthopedic surgery at the Johns Hopkins University School of Medicine, and now with Janssen Research and Development, says the research team was originally intending to study the mechanisms behind MRSA skin infections in mice with and without the ability to manufacture interleukin-1 beta (IL-1β). This protein, transformed into its active form by enzymes called caspases, enhances protective immunity by helping immune cells called neutrophils, monocytes and macrophages fight bacterial infections.

“We gave the mice a blocker of all caspases [pancaspase inhibitor], a compound known as Q-VD-OPH, thinking it would leave both sets of mice more vulnerable to MRSA infection,” Miller says. “To our surprise, blocking caspases had the opposite effect, resulting in a rapid and remarkable clearing of the MRSA bacteria by keeping the immune cells alive and boosting their protective function.”

Sensing they might have accidentally uncovered a means of fighting bacterial “superbugs,” Miller and his colleagues conducted their latest study to confirm the unexpected finding was not a fluke.

The results were encouraging.

“A single oral dose of Q-VD-OPH decreased the size of MRSA skin lesions and rapidly cleared the bacteria compared with vehicle-treated [given the carrier solution without Q-VD-OPH] and untreated mice,” says study lead author Martin Alphonse, Ph.D., a dermatology postdoctoral fellow at the Johns Hopkins University School of Medicine. “And surprisingly, the treatment worked whether IL-1β was present or not—and without administering any antibiotics.”

The researchers, says Alphonse, found that the pancaspase inhibitor reduces apoptosis—one of three main methods the body uses to remove worn-out or damaged cells—of neutrophils and monocytes, leaving them in plentiful numbers and better able to remove MRSA bacteria.

“It’s like a fire department where older firetrucks are kept operating to help put out blazes, when otherwise, they would have been taken out of service,” says Miller.

“The destruction of macrophages by necroptosis releases large amount of tumor necrosis factor, or TNF, a protein that triggers bacteria-fighting immune cells to swarm into an infected area of skin,” says Alphonse.

Finally, the researchers tested whether Q-VD-OPH in mice could have broader activity against two other dangerous skin bacteria, Streptococcus pyogenes (the cause of multiple diseases, including scarlet fever, necrotizing fasciitis and toxic shock syndrome) and Pseudomonas aeruginosa (often a threat to hospitalized patients on ventilators, with catheters or suffering wounds from surgery or burns). The targeting of the body’s immune system against bacteria via pancaspase inhibition—referred to as “host-directed immunotherapy”—proved just as successful as it had been for MRSA.

“It was an accidental finding by Alexander Fleming that led to the golden age of antibiotics, but now that’s nearing the end because of antibiotic-resistant bacteria,” says Miller. “It seems fitting that another surprise in the lab could be the start of a second golden age, the use of host-directed immunotherapy,” says Miller.

Data from this study were included earlier this year in a U.S. patent application (PCT/US2021/024889) through Johns Hopkins Technology Ventures for “Caspase inhibition as a host-directed immunotherapy against bacterial infections.”

Miller is a full-time employee of Janssen Research and Development; has received grant support from AstraZeneca, Pfizer, Boehringer Ingelheim, Regeneron Pharmaceuticals, and Moderna Therapeutics; holds stock from Johnson & Johnson and Noveome Biotherapeutics; and was a paid consultant for AstraZeneca, Armirall and Janssen Research and Development, which are all developing therapeutics against S. aureus and other pathogens.