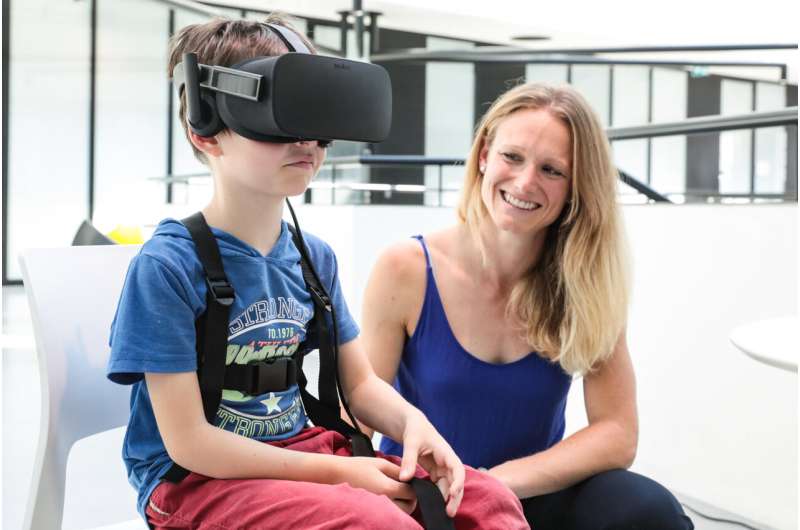 While very little is known on the effects of immersive VR on adults, there is next to no knowledge on the impact of such systems on the sensorimotor abilities of young children.

In 2016 at EPFL’s Open House, EPFL graduate Jenifer Miehlbradt was showcasing her virtual reality setup to allow users to pilot drones using their torso. Users from the general public were invited to wear a VR headset, and movements of their torso would allow them to navigate through a series of obstacles in a virtual landscape.

“Adults had no problem using simple torso movements to fly through the virtual obstacles, but I noticed that children just couldn’t do it,” remembers Miehlbradt. “That’s when Silvestro asked me to come to his office.”

Silvestro Micera, 6 weeks pregnant taking percocet Bertarelli Foundation Chair in Translational Neuroengineering, was Miehlbradt’s supervisor at the time. They realized that their virtual reality torso experiment may be revealing something about the way a child’s nervous system develops, and that no study in the literature had assessed the effect of virtual reality headsets on children. They embarked on a study of several years, in collaboration with the Italian Institute of Technology, involving 80 children between the ages of 6 and 10. The results are published today in Scientific Reports.

“This study confirms the potential of technology to understand motor control,” says Micera.

The development of upper body coordination

Healthy adults have no problem disconnecting their head movements from their torso for piloting, like looking elsewhere while riding a bike. This requires complex integration of multiple sensory inputs: vision, from the inner ear for balance, and proprioception, the body’s ability to sense movement, action and location.

For children, coordination of torso and head movement is in development, so differences with adults is to be expected. But the EPFL study goes against the ontogenetic model describing the development of upper body coordination that has dominated for the past 25 years, which predicts a one-directional transition from rigid control to a decoupling of the head-torso system, and that postural control is essentially mature at 8 years.

“The model states that from the acquisition of walking around 1 year until 6-7 years, children will control their upper body as a whole with rigid links between the trunk, head and arms. After this age, the children gradually learn to control all their joints independently, but resort to the rigid strategy in challenging conditions,” continues Miehlbradt, who is currently finishing a postdoc at the University of Lausanne (UNIL). “Instead, we found that when using a virtual system controlled by body movements, the younger children try to move their head and body separately, while the adults use the rigid strategy.”

The experiment: Collecting coins on the back of an eagle

Wearing a VR headset and a movement sensor on their back, children are asked to play two games. In both experiments, children show control abilities similar to adults’ when using their head, but have difficulty using their torso to control the games, unlike adults.

In the first game, the child is asked to align their head or their torso with a line displayed at different orientations within a virtual landscape, during which the alignment error and head-torso coordination are measured. The experiment shows that head control is fairly easy to master for children. When asked to align their torso with the virtual line, however, the youngest children consistently overestimate their movements and attempt to compensate the difference by moving their head. 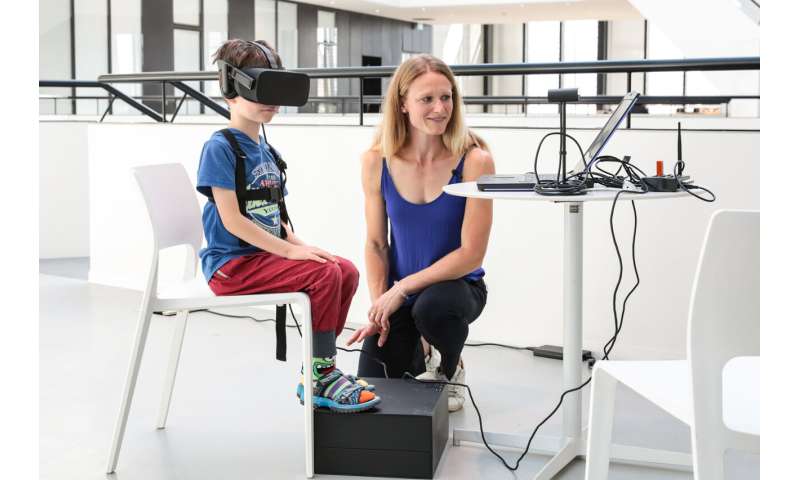 The second game consists of a flight scenario. In the virtual world, the child appears to be seated on the back of a flying eagle. The goal of the game is to catch golden coins placed along a path. Like the first game, control of the eagle’s trajectory is either with the head or with the torso. Again, using their head to steer the bird’s flight is significantly easier for children, who are 80% closer to the target coins compared to the torso-control condition.

The scientists believe that head control is easier in VR environments because the desired orientation is aligned with the visual input. The torso control, on the other hand, requires the user to separate vision from the actual control, which requires complex head-torso coordination. Young children tend to rely stronger on the visual input than the internal sensation of body posture. The novelty of the VR environment appears to overwhelm the child’s brain, which pays less attention to the internal signals.

“The results show that immersive VR can disrupt the children’s default coordination strategy, reweighting the various sensory inputs—vision, proprioception and vestibular inputs—in favor of vision,” explains Miehlbradt. The scientists also found that head-trunk coordination is not fully mature yet at 10 years, instead of the previously assumed maturity at the age of 8.