Retailers, including Target, have been forced to cut prices on general merchandise, such as clothing, electronics and home goods, because of excess inventory of goods. Consumers had to shift more of their spending to higher priced food and gasoline.
But Target reported that its price cuts did little good: It ended the quarter with 1.5% more inventory than it had three months earlier and 36% more than it had a year ago.

The company said it reduced the amount of discretionary items it held in warehouses, but Target noted the sales on those items “put significant pressure on our near-term profitability.”

Shares of Target (TGT) fell 2% in premarket trading on the report.

Target’s quarterly net income fell to $183 million, down significantly from $1.8 billion during the same period a year ago.

Plus, its adjusted earnings of 39 cents a share were far below the 72 cents forecast by analysts surveyed by Refinitiv. Sales of $26 billion were up slightly from a year ago and roughly in line with forecasts.
After seven quarters of strong profit growth, this marks the second-straight quarter of plunging earnings at Target, although this decline was far more than the 40% drop in the previous quarter.
Consumers’ pullback on demand for discretionary items is one of the factors raising fears of a recession, as consumer spending is responsible for nearly three-quarters of the nation’s economic activity.
Target’s disappointing results came in contrast to much stronger results at larger rival Walmart (WMT), which Tuesday reported profit was down only slightly from a year earlier. Walmart also said it expects a 8% to 10% drop in annual earnings, though that’s a narrower drop than it previously forecast.

‘Feeling the impact of inflation’

The environment for Target and similar retailers remains “challenging,” CEO Brian Cornell told investors Wednesday. But Target is seeing “an encouraging start to the back-to-school” shopping season, he said.
He believes the hit to earnings in the recent quarter shouldn’t be repeated: “The high-level story is: The vast majority of the financial impact of these inventory actions is now behind us.”
Still, it’s a difficult time to be a retailer given the unpredictability of consumer spending activity and the effect of macro factors like inflation.
Target is “hearing from our guests is that they still have spending power but they’re increasingly feeling the impact of inflation,” said Christina Hennington, the company’s chief growth officer. She said the drop in gas prices in the last two months was “encouraging,” however.

These trends are hitting Target harder than rival Walmart, which gets a greater share of its sales and profits from essentials like groceries. Target typically depends more on those discretionary items. 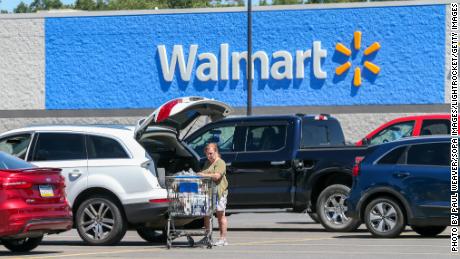 Walmart has a reputation for offering the lowest prices among big-box retailers in many categories — but in its earnings report Tuesday, the company said sales to middle- and higher-income shoppers has increased.
Source: Read Full Article