Westpac’s second-half profit will take a $1.3 billion hit due mainly to hefty write-downs in its institutional banking arm, where ultra-low interest rates are set to take a toll on earnings.

The banking giant on Tuesday flagged a series of “notable items” such as write-downs and provisions that will cut its second-half profits, which will be delivered to the market at the start of next month. 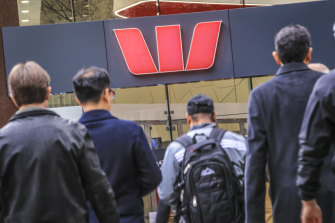 Westpac wrote off all the goodwill in Westpac Institutional Bank.Credit:Wayne Taylor

With investors expecting the bank will unveil a share buyback at the results, Westpac said the items would subtract 15 basis points from its top-tier capital.

Most of the hit will come from $965 million in write-downs in the Westpac Institutional Bank (WIB), the part of Westpac that banks major corporate and government clients.

Westpac said it had written off all $487 million of the goodwill in WIB, which reflects the fact the business has become significantly smaller and less profitable.

Westpac said its valuation of the WIB division reflected in part moves to simplify the bank, including scaling back its presence in Asia and quitting the energy trading business.

It also said that a prolonged backdrop of low interest rates, alongside high expenses for compliance, had also dampened its outlook for earnings in the bank. The bank is also writing off $344 million in capitalised software and $325 million in other assets, which it said were mostly property leases.

On top of the write-downs, Westpac is also taking $172 million in extra provisions for customer refunds, payments, associated costs and provisions for litigation.

There will also be a further $267 million impact from the transaction costs and an asset write-off relating to the sale of Westpac Life Insurance Services, the bank said, adding that this had been previously disclosed.

More Than 670,000 Californians Face a Christmas Eve in the Dark