The Trump administration is urging U.S. companies to monitor their operations in China, particularly in the country's Xinjiang region, to crack down on human rights abuses against the Uighur population.

According to a joint advisory issued by the departments of State, Treasury, Commerce and Homeland Security, the administration is warning all U.S. businesses, individuals, academic institutions, service providers and investors that those who conduct business with Chinese suppliers or any entity that relies on the forced labor of Uighurs will face "reputational, economic, and legal risks associated with certain types of involvement with entities that engage in human rights abuses."

"CEOs should read this notice closely, and be aware of the reputation, economic and legal risk of supporting such assaults on human dignity," Secretary of State Mike Pompeo told reporters Wednesday.

The advisory notes that the People's Republic of China in Xinjiang has "detained for indefinite periods more than one million Uyghurs, ethnic Kazakhs, ethnic Kyrgyz, and members of other Muslim minority groups in internment camps" since at least March 2017 in camps designed to "eradicate detainees’ cultural and religious identities and to indoctrinate them with Chinese Communist Party (CCP) ideology."

"There is evidence that some have died in the internment camps, or very shortly after release, as a result of abuse and neglect," the advisory reads. "These abuses are now believed to have spread beyond Xinjiang, with credible reports claiming that victims are currently being sent to other provinces and subjected to forced labor and other abusive labor conditions.”

A report by the Associated Press found budget documents showing the Xinjiang government began pumping tens of millions of dollars into a birth control surgery program and cash incentives for women to get sterilized starting in 2016.

Sterilization rates surged in Xinjiang from 2016 to 2018 as more than 60,000 procedures were done. The Uighur-majority city of Hotan budgeted for 14,872 sterilizations in 2019 — over 34 percent of all married women of childbearing age, according to research from China scholar Adrian Zenz obtained by AP. 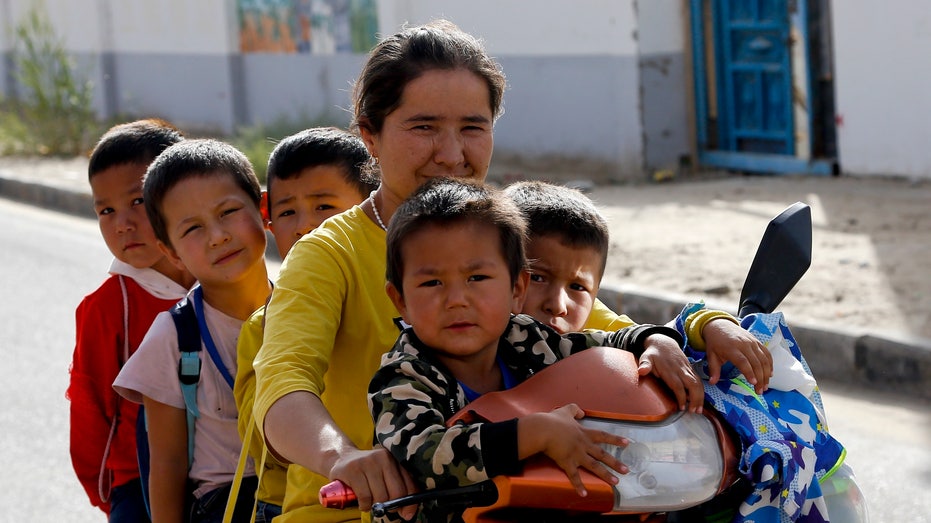 In this Sept. 20, 2018 file photo, a Uighur woman and children sit on a motor-tricycle after school at the Unity New Village in Hotan, in western China’s Xinjiang region. (AP Photo/Andy Wong)

Birth rates in the mostly Uighur regions of Hotan and Kashgar plunged by more than 60 percent from 2015 to 2018 while falling nearly 24 percent across the Xinjiang region in the last year alone compared to just 4.2 percent nationwide, according to the report.

The Department of Homeland Security said it will take increased enforcement action against any U.S. business that contributes to human rights abuses in Xinjiang or anywhere else in China.

“Given the kind of atrocities going on in China at the hands of the PRC, every U.S. business needs to review the advisory and thoroughly evaluate their business activities and should examine the impact this exportation of forced labor has on their supply chains and more importantly, their reputations,” said Acting Deputy Secretary of DHS Ken Cuccinelli.

DHS Customs and Border Protection will prohibit the import of goods produced from forced labor by Uighurs into the United States from China, especially Xinjiang, and is "actively investigating companies and corporate officials who knowingly benefit from forced labor in Xinjiang."

The announced crackdown on human rights abuses in China comes following President Trump's signing of the Uyghur Human Rights Policy Act of 2020, which gives the president authority to impose sanctions against people in China linked to certain actions against Muslim ethnic groups in Xinjiang.

High US unemployment could last a year: survey

Latest Posts
DMM Vission Recalls Certain Lots Of Cleaner Hand Sanitizer
Stocks jump with jobs, stimulus talks in focus
PMRC Will Lay Off 50 After Joint Venture Between PMC and MRC
PepsiCo sees strong annual profit as snacks, sodas thrive in pandemic
Business development salaries revealed: Here's how much tech giants like pay the teams negotiating their blockbuster deals and acquisitions
Recent Posts
This website uses cookies to improve your user experience and to provide you with advertisements that are relevant to your interests. By continuing to browse the site you are agreeing to our use of cookies.Ok