Negativeoil prices, ships dawdling at sea with unwanted cargoes, and traders gettingcreative about where to stash oil. The next chapter in the oil crisis is now inevitable: great swathes of the petroleum industry are about to start shutting down.

The economic impact of the coronavirus has ripped through the oil industry in dramatic phases. First it destroyed demand as lockdowns shut factories and kept drivers at home. Then storage started filling up and traders resorted toocean-going tankers to store crude in the hope of better prices ahead.

Now shipping prices are surging to stratospheric levels as the industry runs out of tankers — a sign of just how distorted the market has become.

The specter of production shut-downs — and the impact they will have on jobs,companies, their banks, and local economies — was one of the reasons that spurred worldleaders to join forces to cut production in an orderly way. But as the scale of the crisis dwarfed their efforts, failing to stop prices diving below zero last week, shut-downs are now a reality. It’s the worst-case scenario for producers and refiners.

“We are moving into the end-game,” Torbjorn Tornqvist, head of commodity trading giant Gunvor Group Ltd., said in an interview. “Early-to-mid May could be the peak. We are weeks, not months, away from it.”

In theory, the first oil output cuts should have come from the OPEC+ alliance, which earlier this monthagreed to reduce production from May 1. Yet after the catastrophic price plunge on Monday, when West Texas Intermediate fell to –$40 a barrel, it’s the U.S. shale patch that is leading.

The best indicator of how the U.S. industry is reacting is the rapid drop in the number of oil rigs in operation, which last week fell to a four-year low. Before the coronavirus crisis hit, oil companies ran about 650 rigs in the U.S. By Friday, more than 40% of them had stopped working, with only 378 left.

“Monday really focused people’s minds that production needs to slow down,” Ben Luckock, co-head of oil trading at commodity merchant Trafigura Group, said. “It’s the smack in the face the market needed to realize this is serious.”

Trafigura, one of the largest exporters of U.S. crude from the U.S. Gulf of Mexico, believes that output in Texas, New Mexico, North Dakota and other states will now fall much faster than expected as companies react to negative prices, which have persisted for several days last week in the physical market.

Until prices collapsed on Monday, the consensus was that output would drop by about 1.5m barrels a day by December. Now market watchers see that loss by late June. “The severity of the price pressure is likely to act as a catalyst for the immediate turndown in activity and shut-ins,” said Roger Diwan, oil analyst at consultant IHS Markit Ltd.

The price shock has been particularly intense in the physical market: producers of crude streams such as South Texas Sour and Eastern Kansas Common had to pay more than $50 a barrel to offload their output last week.ConocoPhillips and shale producer Continental Resources Inc. have all announced plans to shut in output. Regulators in Oklahoma voted to allow oil drillers to shut wells without losing leases; New Mexico made a similar decision.

North Dakota, which for years was synonymous with the U.S. shale revolution, is witnessing a rapid retrenchment. Oil producers have already closed more than 6,000 wells, curtailing about 405,000 barrels a day in production, or about 30% of the state’s total.

The output cuts won’t be limited to the U.S. From Chad, a poor and landlocked country in Africa, to Vietnam and Brazil, producers are now either reducing output or making plans to do so.

“I wouldn’t want to get sensational about it but yes, clearly there must be a risk of shut-ins,” Mitch Flegg, the head of North Sea oil company Serica Energy, said in an interview. “In certain parts of the world it is a real and present risk.”

In emergency board meetings last week, oil companies small and large discussed an outlook that’s the most somber any oil executive has ever witnessed. For the small firms, the next few weeks will be all about staying afloat. But even for the bigger ones, like Exxon Mobil Corp. andBP Plc, it’s a challenge. Big Oil will offer an insight into the crisis when companies report earnings this week.

Saudi Arabia, Russia and the rest of the OPEC+ alliance will join the output cuts on Friday, slashing their output by more than 20%, or 9.7 million barrels a day. Saudi Aramco, the state-owned company, is alreadytrimming to reach the target. And Russian oil companies have announced exports of their flagship Urals crude would drop in May to a 10-year low.

Even so, it may not be enough. Every week, 50 million barrels of crude are going into storage, enough to fuel Germany, France, Italy, Spain, and the U.K. combined. At that rate, the world will run out of storage by June. What’s not stored onshore, is stashed in tankers. The U.S. Coast Guard on Friday said there were so manytankers at anchor off California that it was keeping an eye on the situation. 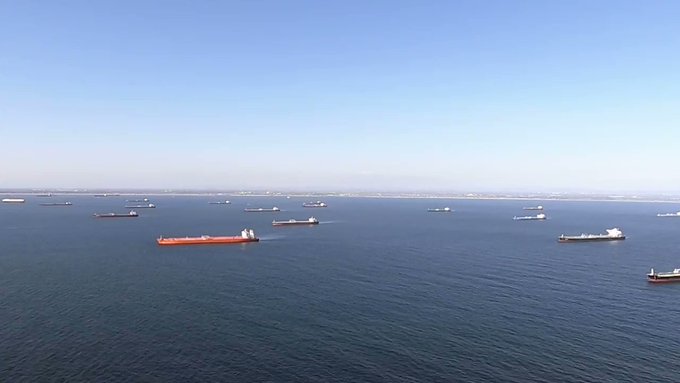 Before the crisis hit, the world was consuming about 100 million barrels a day. Demand now, however, is somewhere between 65 and 70 million barrels. So, in a worst-case scenario, about a third of global output needs to be shut.

The reality is likely to be less severe as storage would continue to bridge the gap between supply and demand. Plus, oil traders say consumption has probably hit a bottom, and will start a very gentle recovery.

But before that takes hold, the great shutdown will spread through oil refining too.

Over the past week, Marathon Petroleum Corp., one of the biggest U.S. refiners, announced it would stop production at a plant near San Francisco. Royal Dutch Shell Plc has idled several units in three U.S. refineries in Alabama and Louisiana. And across Europe and Asia, many refineries are running at half rate. U.S. oil refiners processed just 12.45 million barrels a day on the week to April 17, the lowest amount in at least 30 years, except for hurricane-related closures.

More refinery shutdowns are coming, oil traders and consultants said, particularly in the U.S. where lockdowns started later than in Europe and demand is still contracting. Steve Sawyer, director of refining at Facts Global Energy, said that global refineries could halt as much as 25% of total capacity in May.

“No one is going to be able to dodge this bullet.”