Sales were up 11%, to $1 billion, surpassing estimates of $978 million. Profits surged 30% to $249 million, or 52 cents a share. Analysts were predicting earnings to come in at 47 cents a share.
What’s more, consumers seem willing to splurge on higher-priced bourbon, despite worries about inflation and an economic slowdown. Sales of Brown-Forman’s (BFB) premium brands, which include Old Forester and Woodford Reserve, were up 35% from a year ago.

“While there is continued uncertainty in the market, I remain optimistic we can continue this momentum and deliver on both short- and long-term growth ambitions,” said Brown-Forman president and CEO, Lawson Whiting, in the earnings release.

Shares of Brown-Forman rose slightly Wednesday. The stock is up a bit for the year and has gained about 10% in the past three months, even as the broader market has tumbled and other alcoholic beverage stocks such as Anheuser-Busch (BUD), Boston Beer (SAM), Constellation Brands (STZ), Molson Coors (TAP) and Diageo (DEO) have lagged.

The company also has embraced the cocktail-in-a-can craze and found success with beverages such as Jack and Coke in a can, the result of a partnership with Coca-Cola (KO). Brown-Forman said Wednesday that sales of its so-called “Ready-to-Drink/Ready-to-Pour” beverages rose 12% from a year ago, led by strong demand from Australia and Germany. 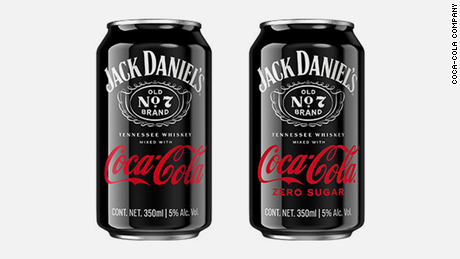 “Brown-Forman has endured because we have some of the most attractive spirits brands in some of the most desirable categories, and we continue to innovate and expand our portfolio,” Whiting said on a conference call with analysts.

Inflation concerns and broader fears about the economy do not appear to be having a major impact on demand for liquor either. Consumers, no longer as worried about the pandemic, are once again taking vacations … and imbibing while doing so.
In fact, Brown-Forman noted that strong demand for booze at airports and on cruise ships also helped lift sales. Revenue from the company’s travel segment, which includes duty-free stores, surged 77% from a year ago.

Chief Financial Officer Leanne Cunningham said on the conference call that while travel-related sales have “not yet fully recovered to pre-Covid levels …[they continue] to close the gap.”
Cunningham did concede that “we do remain cautious given the potential impact of inflation and rising energy prices on consumer spending” and added that higher prices for commodities will remain a “headwind.” But that is clearly not putting a huge dent into profits just yet.
Source: Read Full Article