The surprise $22 billion takeover bid for Sydney Airport has stoked predictions that rival offers could emerge for one of the country’s most sought-after infrastructure assets.

After Sydney Airport on Monday said it would assess a non-binding $8.25-a-share offer from a consortium of big players in superannuation, analysts said the bid was high enough to gain serious attention from the target company.

The airport’s profits have been smashed by the plunge in international travel caused by the pandemic, and fund managers view the offer for Sydney Airport as opportunistic. But market experts said that despite its severe short-term challenges, the airport remained a prized asset over the longer term, which could be attractive to other infrastructure investors. 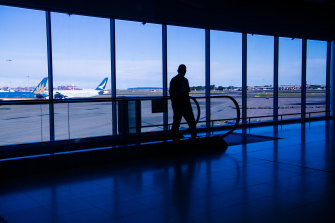 Sydney Airport was a unique asset that could prove attractive to rival bidders, despite the challenges in aviation, analysts said.Credit:James Brickwood

Portfolio manager at Tribeca Investment Partners Jun Bei Liu, a Sydney Airport shareholder, said competing bids for the airport were a real possibility, as it was a highly attractive asset in a world where investors were flush with cash. Because of the size of the takeover, she said any rival bids would probably involve a consortium of investors.

“I think there’s a chance, definitely, of other bidders, although it would have to consist of quite a few players just given how big the cheque is,” Ms Liu said.

As interest rates and bond yields have plunged in recent years, large long-term investors such as pension funds have been piling into long-term assets such as infrastructure. The consortium bidding for Australia’s busiest airport holds more than $177 billion in infrastructure funds globally, including stakes in 20 airports.

The bid for Sydney Airport from a consortium that includes IFM Investors and QSuper sparked a 34 per cent surge in the company’s share price on Monday, and research notes from analysts also highlighted the possibility that rival bids could be flushed out.

Citi analyst Suraj Nebhani said the “unique” nature of Sydney Airport would be appealing to a range of infrastructure bidders. “We therefore see potential for interlopers to get involved in this process,” Mr Nebhani said.

JP Morgan analyst Richard Jones said the offer looked “fair” and would be given serious consideration by the target’s board, and he also described the airport as “high quality and irreplaceable”.

“We believe competing bids cannot be ruled out, especially given the appeal of long duration infrastructure assets,” Mr Jones said.

Complicating rival bids, there is a 49 per cent cap on foreign ownership of Sydney Airport, and there are restrictions cross-ownership of several major airports in capital cities.

Some observers say the super fund consortium is uniquely suited to owning the asset due to its domestic base, and super funds’ appetite for unlisted infrastructure assets.

Head of Australian equities at Aberdeen Standard Investments, Michelle Lopez, said large domestic pension funds were “natural owners” of airports, and she played down the chances of another bid emerging.

“It’s absolutely possible, I don’t think it’s probable,” said Ms Lopez, who is invested in Sydney Airport. “My advice would be to the board would be to work constructively with these parties.”

Citi’s Mr Nebhani said the takeover also put the spotlight on other infrastructure assets such as the dual-listed Auckland International Airports, and it highlighted investor confidence in airports in a post-COVID world.

Coronavirus slams Kroger, Whole Foods and other US grocery chains