Suncorp says home insurance premiums are set to keep rising as a result of increasing claim costs due to wild weather and high inflation in the building sector, and it is putting through price rises in the “mid-teens”.

Brisbane-based Suncorp on Monday said profits for the year fell by a third, as earnings in its flagship insurance arm dropped sharply because of a wave of natural disaster claims, including from this year’s catastrophic floods. 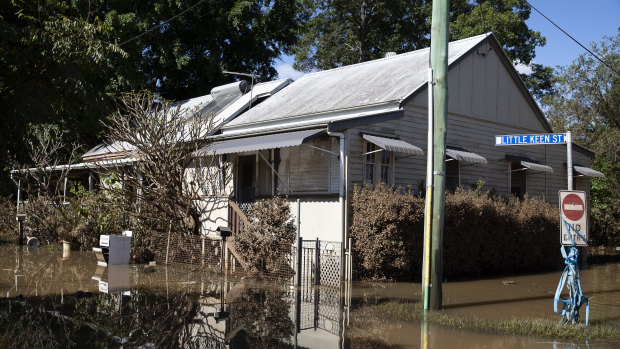 Lismore was affected by catastrophic flooding this year. Credit:Natalie Grono

As insurers continue to underestimate the cost of wild weather, Suncorp exceeded its allowance for natural disasters by $101 million, and said it would raise the allowance in the year ahead by $180 million to $1.16 billion.

As all insurers jack up premiums in response to rising costs, chief executive Steve Johnston told analysts Suncorp had been putting through “quite material” increases in home insurance premiums, highlighting higher reinsurance costs, inflation in building input costs, and shortages of tradespeople.

When asked by an analyst how rising insurance costs would affect affordability, Johnston acknowledged premiums had been rising sharply in recent years, but said the company was not seeing signs of consumers dumping insurance cover.

“As an industry we are seeing obviously increase premiums coming through,” Johnson said. “In this environment, we have to reflect that that does put pressure on affordability.”

He said he was keeping a “very close eye” on the affordability, and said governments could help to address the issue by lowering taxes on insurance.

In its outlook, Suncorp also highlighted “increased input costs, including from reinsurance, natural hazards and supply chain inflation”. It noted current modelling suggesting there would be another La Nina weather pattern this year.

“While the group’s extensive modelling of catastrophe risk indicates only a minor upward trend in the frequency of natural hazard-related events, more recent years have been adversely affected by the prevalence of the La Nina related weather pattern,” Suncorp said.

“The group has noted current modelling pointing to the likelihood of a third consecutive La Nina year.”

Suncorp’s bank – which it is planning to sell to ANZ for $4.9 billion – reported a 12.2 per cent drop in profits as its margins were squeezed and the company lifted its investment spending. Johnston said the company had no new information about the regulatory approvals for the deal.

Suncorp’s net profit after tax fell 34.1 per cent to $681 million. The company will pay a final dividend of 17 cents a share, fully franked and paid on September 21.

Suncorp shares were down 6 per cent at $10.96 in mid-morning trade.

Citi analyst Nigel Pittaway said Suncorp’s reported net profit after tax was below market consensus estimates, and its dividend payment was lower than expected, but against this, its gross written premium growth was stronger than he had expected.

“Overall, the result seems to just about meet consensus, although perhaps with some slight softness in general insurance and the dividend,” Pittaway said.