Frustrated that paint companies were not using their technology to push online sales, the founders of colour recognition startup Palette decided to launch a direct-to-consumer paint company themselves.

"We realised our technology around colour was enabling online paint buying," co-founder Djordje 'DJ' Dikic said. "I went to all our suppliers and pitched them about enabling online paint sales and the universal message was 'That's great DJ, we see that's the future but we have too many retail relationships and we can't undercut them'." 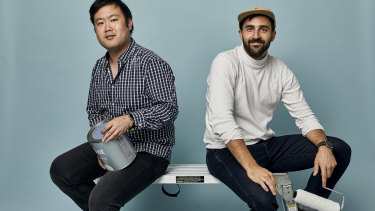 Mr Dikic founded Palette in 2013 with Rocky Liang and Paul Peng, who has since left the startup, focusing on paint recognition technology.

Customers can either choose from one of 70 colours and have it shipped to them or they can order Tint's colour capture tool, Pico, for $79 to customise paint to their desired shade.

"We see this as a clear path forward for everyone," Mr Dikic said.

"Everything is better when it goes online, you can take paint out of the pain bucket and put it in the happy bucket."

Mr Dikic said Palette was still continuing and he saw the two startups as complementary, with Palette selling more than 50,000 devices in 66 countries around the world since its inception and working with some major brands including Disney and Apple.

"Everything we develop with Palette leads straight into Tint and vice versa," he said.

However, Mr Dikic said not all Palette's customers were entirely thrilled with its entry into the paint market, including market giant Dulux, which Palette had previously partnered with.

"You can imagine it can be an interesting conversation," he said.

"We still have a great relationship with them. Obviously, now we are bringing something fresh and different to the market, we have a different view of how the future looks and that conversation can be hard."

Investor and chair Adam Lewis said there was plenty of opportunity for Tint in the paint market, which is valued at $3 billion in Australia.

"What I have tried to do is back technology and people that try to disrupt existing industries," he said.

"With Aconex, the old paper based documentation was causing all this trouble and the business had the potential to change the productivity of an industry. With Palette, all these industries that rely on colour could have their productivity fundamentally changed through this technology."

Mr Lewis said the challenge was to get paint companies to adopt a new way of working, as there was a lot of money invested in colour cards and proprietary colour libraries.

"We look at Tint really as a proof of concept that people do want to buy paint online and they will find the interaction with digital colour fundamentally better than what they have," he said.

"Tint is proving to every paint company around the world that customers want to interact with paint in this way."