The Commonwealth Bank has defended chief executive Matt Comyn's multimillion pay packet after the lender was blasted by a top corporate governance advisor ahead of this week's annual general meeting.

ISS head of research Vas Kolesnikoff said it was not clear why senior staff at the nation's biggest bank should be rewarded with its share price significantly lower than where it was last year and many staff facing a pay freeze.

"In CBA's case, the stock price has gone down 30 to 40 per cent, results are down 11 per cent for the year and the bonuses are getting bigger," he said. "Since when do you get a bonus for fixing a failure?" 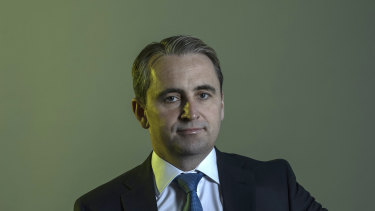 CBA shareholders will vote on executive pay at the bank's annual general meeting on Tuesday. ISS has advised shareholders to vote against the company's remuneration report, but other groups including CGI Glass Lewis and the Australian Council of Superannuation Investors have endorsed it.

There has been intense scrutiny over pay for top banking executives since the damaging revelations of the Hayne royal commission. Last week the Reserve Bank of Australia said the banking regulator would soon resume work on ensuring executive pay was tied to targets that encourage good practice and culture.

CBA chief executive Matt Comyn is set to receive a base salary plus short and long-term bonuses totalling over $3.4 million, meaning his total pay for the year will be more than $5.6 million, up from $4.3 million the previous year, according to CBA's annual report.

ISS figures show Mr Comyn's bonus would reach $6.2 million, based on 47,957 shares being awarded in November last year. Under this calculation his total take home pay would be more than than $8.4 million.

Mr Kolesnikoff said bank executives should not be paid for "doing their day job".

"What are you paying for? For fixing stuff you did wrong that caused shareholder losses through fines and legal costs in the first place?" he said.

Executive bonuses are determined by a combination of performance targets spanning corporate culture, profits and customer outcomes. This year, the most heavily weighted measure (30 per cent) for Mr Comyn's bonus was the bank’s ability to meet milestones set out by the prudential regulator after a 2018 inquiry found systemic failures in CBA’s operations.

CBA has implemented around 70 per cent of milestones set by independent consulting firm, Promontory.

Mr Kolesnikoff said APRA had increasingly encouraged banks to boost executive action on non-financial risks, like culture and governance, but progress on remediation should not be rewarded.

CBA is set to introduce new remuneration framework that would reduce overall pay for the CEO and executives by up to 19 per cent and require them to receive more of their total package in shares.

"These equity grants are subject to significant risk and performance hurdles and take into account additional rules by regulators which govern risk and deferral periods," a CBA spokesman said.

"They also include measures of how well management is implementing sustained cultural change that is embedded over the long term and greater accountability for their decisions.

"These changes more closely align their interests with shareholders based on the longer term performance of the company, moves that have been recognised by four out of the five major proxy and shareholder advisory groups who have recommended votes in favour for the AGM remuneration motions."

In April, NAB announced it would cut pay for the board and cease short-term bonuses for executives as the economy reels from the coronavirus pandemic.

Mr McEwan told a public forum this month that bank executives should "only win when our customers and shareholders are winning".

"We understand the pain that customers are feeling at the moment… the last thing they want to see is bankers winning off the back end of them," Mr McEwan said.

Around 30,000 CBA staff rejected an enterprise bargaining offer that included annual rises of 1.5 and 2 per cent for some and pay freezes for workers on higher salaries. "If they’re screwing over workers while feathering their own pockets, that’s pretty bad," Mr Kolesnikoff said.

The negotiations remain ongoing but the Finance Sector Union has described the deal as "unfair".

"The huge bonuses being paid to senior management should be accompanied by fair and decent pay for staff," FSU national secretary Julia Angrisano said.

"CBA staff have made a major contribution to the bank’s healthy profit result and it is disappointing that the current pay offer fails to recognise their hard work and dedication."