A group of more than 400 doctors and other health professionals including former Australian of the year Fiona Stanley have swung behind a campaign to force $50 billion superannuation fund HESTA to divest itself of fossil fuel stocks.

Professor Stanley, an acclaimed epidemiologist, and Professor Judith Savage, Dr Tim Woodruff, Dr Simon Judkins and Dr Tilman Ruff are among the notable health professionals calling on HESTA to divest itself of shares in 19 fossil fuel producers with business models the group argues are inconsistent with the Paris climate agreement seeking to limit emissions.

HESTA has more than 840,000 members largely working in the medical sector. The Age and The Sydney Morning Herald revealed last month that it was one of five major super funds to have billions of dollars invested in coal companies and other fossil fuel producers.

Its investments include Coal India, a company that boasts of being the "single largest coal producer in the world", operating 83 mines and producing 83 per cent of India's coal output. 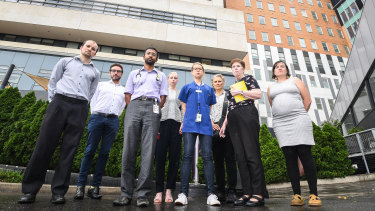 Professor Stanley said a warming planet would lead to tropical infectious diseases reaching Australia and that heatwaves were already having a major impact on hospital admissions, resulting in the deaths of old and vulnerable people.

"What scares me is the fossil fuel lobby in Canberra is huge," Professor Stanley said. "If you're a doctor that cares about the wellbeing of your community, you need to come out and say this is ridiculous. No more fossil fuels, leave it in the ground."

Since 2015, a group of medical professionals, students and other community members known as Healthy Futures has lobbied HESTA to pull out of companies with primary business in "fossil fuel extraction, transportation or power generation" including Cooper Energy, South32, Whitehaven Coal and Woodside Petroleum. The campaign has been supported by 441 health workers who have emailed the fund to ask for divestment in these assets.

Healthy Futures co-founder Kate Lardner, who works at the Frankston Hospital and spends over $15,000 of her own money each year to sustain the campaign, said in January she requested a meeting with HESTA to discuss the fund's investment strategy. But after a week the request for a meeting was ignored and she is now planning to protest at the fund's Melbourne office on Wednesday with a group of concerned health professionals to demand a meeting.

"It's really disappointing and disheartening when they don't even acknowledge our request to meet," Dr Lardner said. "I would like to just be a doctor and not do this in my spare time. But I'm doing it because I feel so anxious about the issue and I feel a responsibility because it is affecting my patients."

Dr Lardner worked during the 2016 thunderstorm asthma event that killed 10 people after an unusual combination of weather systems triggered severe asthmatic symptoms in people around Melbourne. She said it was a "terrifying" shift as the hospital became flooded with cases and said climate change would cause more severe health events in the future.

HESTA declined to comment on the protest or Dr Lardner's meeting request.

The campaign has had a rise in interest following the devastating summer fires that scorched more than 18 million hectares, destroyed over 2700 homes and killed 34 people and around 1 billion animals.

An open letter to HESTA from Healthy Futures says it is "unconscionable" for the fund to continue supporting fossil fuel companies, pointing to the health effects of air pollution, coal combustion and fracking for unconventional gas.

"All fossil fuels, when burned, contribute to climate change, which has been identified as the greatest global health threat of our time," the letter says.

HESTA and other funds claim retaining a stake in the fossil fuel industry enables them to lobby for more sustainable practices. Most funds also have sustainable investment options that screen out polluting companies.

Research by the Australian Centre for Corporate Responsibility found HESTA was among the five most active funds in supporting shareholder resolutions on climate change but overall this support was on the decline.

Dr Lardner criticised HESTA's vote against a proposal at Whitehaven Coal's 2018 annual general meeting to align its strategy with the Paris Agreement. "They are clinging to this strategy of engagement but even when they can use that strategy, they are not," Dr Lardner said.

Dr Simon Judkins, who leads the Australasian College for Emergency Medicine and is deputy director of emergency medicine at Austin Health, supports the campaign and said the engagement strategy does not stack up.

"These big companies are going to do whatever they want without listening to their shareholders," Dr Judkins said. "The best way to have impact is withdraw support."

Dr Judkins spent four days in the epicentre of Victoria's bushfire crisis, Mallacoota, to provide emergency medical support to locals after the town's sky turned blood red and apocalyptic images circulated around the world. He treated patients for smoke inhalation and mental distress, but said the long-term health impacts resulting from the fires are yet to be determined.

"Clinicians are raised on the ethos of first do no harm and prevent the health impact of disease. Climate change is the biggest health challenge, health crisis, that we face," he said. "Our patients need us to step up for them."