National Australia Bank has been targeted by Indigenous activists over its stake in a controversial Canadian gas pipeline, ahead of the release of the major bank’s revamped policy on oil and gas investing and increased scrutiny on traditional owner land rights in Australia.

The coalition of more than 100 activist groups, including Greenpeace, Friends of the Earth, Market Forces and BankTrack, have signed a letter to NAB and other global investors of Coastal GasLink – a 670-kilometre gas pipeline project with approval from the Canadian government. 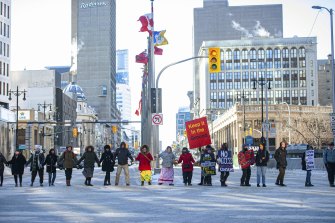 Coastal GasLink has provincial approval to build a 670-kilometre pipeline, but the chiefs say they won’t allow anyone on the First Nation’s traditional territory without their consent.Credit:Mike Sudoma

The letter has been organised by leaders of Canada’s Wet’suwet’en nation, an Indigenous group who have fiercely opposed the pipeline for years. The group made global headlines last year for instigating a number of blockades against construction, which triggered protests around Canada.

Now, the activist group is calling on NAB and other investors to divest all holdings in the project, claiming it violates the United Nations Declaration on the Rights of Indigenous People that states, “Indigenous peoples shall not be forcibly removed from their lands or territories”.

“We are responsible for decisions regarding our land, and the decision of TC Energy [parent company] to construct the Coastal GasLink pipeline without our consent is an infringement of our title and rights,” the letter states.

“While we are currently in negotiations with federal and provincial government ministers to have our land rights and title [recognised] and upheld, this does not mean there is agreement with respect to Coastal GasLink … We remain unequivocally opposed to oil and gas pipelines on our territories and are determined to continue to protect our lands, air, and water.”

The letter claims the project will destroy cultural heritage and argues traditional owners have not provided consent for land use, despite a number of other Indigenous groups agreeing to the project.

“It is becoming inarguably clear that projects lacking free, prior and, informed consent from Indigenous communities should not and cannot be built,” the letter states. “We call on you to divest and withdraw investment in the Coastal GasLink pipeline immediately … In no way is Coastal GasLink a responsible, profitable, secure, or morally sound investment.”

The federal inquiry investigating Rio Tinto’s destruction of 46,000-year-old caves this week called for national laws to protect Indigenous heritage and new powers for traditional owners to refuse projects threatening significant sites on their lands. The Juukan gorge explosion threw the mining giant into turmoil and refocused the debate for reform to give traditional owners greater rights.

The activist group also claims the Canadian project is likely to become a stranded asset, as the global clean energy transition moves away from oil and gas and comes as NAB is re-evaluating its position on the sector.

The Age and Sydney Morning Herald reported in June that NAB chief executive Ross McEwan had pledged to consider the International Energy Agency report released this year, that claimed no new fossil fuel projects could be funded if net zero emissions by 2050 is to be achieved, in an email to the Australian Conservation Foundation.

NAB’s senior leadership was due to review the bank’s oil and gas policy in September, with an updated statement to be released by the end of the year. NAB has already pledged to fully exit thermal coal investments by 2030, following investor pressure and rising risks attached to the sector.

A NAB spokeswoman said the bank was unable to comment on holdings in Coastal GasLink or whether any new climate policies would cause it to divest.

One senior source within NAB, who could not be named because they were not authorised to speak publicly, said the new policy was not likely to include blanket bans against the sector but rather an increasingly detailed focus on heavy emitters’ plans to decarbonise. “I think the theme will be, we’re not denying finance, we need to align with our heavy emitters, hold them to account, have tough conversations,” the source said. “Most importantly we will be actively working with our emitting clients to make sure they are on the right pathway.”

Uber may suspend accounts of riders, drivers who test positive for coronavirus

Decision time looms for the first spot bitcoin ETF. Here’s why an actual launch could be years away