Robotic metal printing startup AML3D is vying to be the latest 3D printing stock to hit the ASX boards, though its chief executive says despite enthusiasm about the sector, growth will take patience.

"It does take time, and it does need investment," Andrew Sales said. 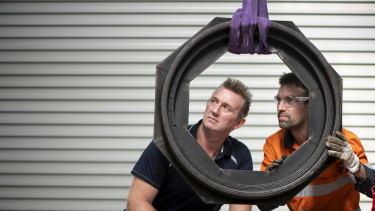 AML3D pioneered a metal printing approach called wire arc additive manufacturing. It draws inspiration from the standard welding process but uses robotics and software to build layers of the material its printers work with which allows for freeform building and means metal parts can be designed without traditional size restrictions of other methods.

The company has also launched a portable 3D printing hub called Arcemy that it wants to sell to businesses in sectors like defence so they can print individual parts as needed even if they are in remote locations.

AML3D this week launched its initial public offering raise asking investors for $9 million with shares at 20c each for the Adelaide-founded business to expand its design pipeline and its printing services into Singapore.

Last year the technology received certification from Lloyd's Register, the global firm providing inspection and certification for firms in the manufacturing, marine and shipping spaces.

Mr Sales said external certification was critical for the business as it started to make its pitches to some of the world's biggest ship and airline builders.

AML3D's technology is targeted at these industries as well sectors like rail and defence, and Mr Sales said the approach was a more cost-efficient way of printing a number of individual machinery pieces that sit within products like aircraft.

If it hits the ASX boards in the coming months, the startup will join a cohort of other 3D printing stocks including Titomic, Aurora Labs, 333D, Robo3D and Oventus.

These peers are using novel printing methods to create everything from defence parts to 3D-printed mouth guards designed to help treatment of sleep apnoea.

Listed Australian 3D printing stocks have had a bumpy couple of years. Titomic, which is focused on printing large titanium components, was a market darling two years ago after listing on the ASX at 20c and hitting as high as $3.00 in 2018.

However its share price was down 60 per cent over the past 12 months, dropping to 82c this week.

Mr Sales said looking across the broader 3D printing sector showed progress from idea to commercialisation for companies was a long one and many businesses had to do significant legwork before getting deals.

"I think that classically what’s happened is that there is a huge opportunity but it's taking a bit longer than what people may have planned," he said.

Like companies before it, AML3D is making its pitch to investors before securing significant revenues: the company generated just under $40,000 from customers last year but its net cash used in operating activities was $687,000.

Mr Sales defended listing so early in the company's journey, saying the funds would allow the business to expand globally and pursue more contracts in the South-East Asian market.

"It would be fantastic to build a business organically and keep it private. But we're in a space where to grow organically is near impossible."

Dogecoin's $2 billion 'whale' might be Robinhood, according to Redditors