Millennial-focused share trading platform Superhero says it’s not a clone of the popular but controversial US app Robinhood, insisting it is subject to far more stringent regulation than its overseas peer.

The latest funding round values the fledgling startup at more than $100 million and Superhero, just like Robinhood, is tapping into the surge in retail investors into the market, which fuelled the GameStop short selling frenzy in the United States. 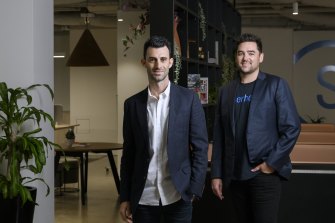 Robinhood played a key part in helping Reddit posters buy GameStop stock, driving up its price, but then controversially moved to restrict their purchase to contain market volatility. With the episode highlighting the power trading apps can exert in distorting the financial markets, Superhero’s co-founder and chief executive John Winters said while the platform was built to remove barriers to sharemarket investing it wasn’t looking to be a clone of Robinhood.

“We have been compared to them but Superhero is a very different business and the Australian market is a very different market as well,” he said. “People have said our offshore competitors may not be acting in the best interests of their customers, where in Australia there’s a lot more regulation that ensures customer security and their best interest are always put first.”

Superhero charges a flat fee of $5 per trade and a minimum investment of $100. Mr Winters said the platform doesn’t provide leverage to its users, so they have to pre-fund their trading account and cannot invest more than they have.

He also pointed out that trading platforms in Australia have to pay the Australian Securities Exchange, in stark contrast to the selling of order flow in the US, where platforms get paid to trade with an exchange.

Superhero has also been careful to steer clear of the “gamification of investment” through features such as emojis and confetti blasts on completion of trades.

“Investment should be easy, the user interface should be easy to use, but it’s not a game and we don’t want to celebrate investing in shares,” Mr Baskin said. “There’s risk involved and if it becomes too much like a game people forget that it’s real money.”

Nevertheless, the rapid influx of retail investors moving into the market is benefiting Superhero, which has signed up over 57,000 customers since launch.

Backed with fresh funds from its roster of heavyweight investors, Superhero is also launching a superannuation product that lets users select Australian shares and exchange-traded funds to invest their super in. It also has its sights set on an initial public offering in the next 12 to 18 months.

”This rise of retail investors that are sourcing their information via social platforms which no one has ever seen before, it’s turned the finance world almost on its head,” Mr Winters said.

Buy these 15 stocks that are shielded from COVID-19 fallout and primed to beat the market even as virus cases spike, Evercore says