Almost $3 billion has fled junk-bond exchange-traded funds in just the first two days of this week, issuance of new debt has dried up and underlying bonds have suffered their worst slump in almost a decade.

It’s a sharp reversal for a bellwether corner of the debt market that until recently had been brushing aside concerns about the spread of the COVID-19 illness globally, while offering investors some of the skimpiest yields to date.

While global stocks endured some of their worst back-to-back losses in years, the market for “junk” corporate bonds, or debt with sub-investment grade credit ratings, has been pulled into the tumult. No U.S. companies have sold debt this week, while exchange-traded funds have seen a rash of outflows.

“The market has absolutely stopped dead in its tracks,” said David Norris, head of U.S. credit at TwentyFour Asset Management, referring to plans by companies to raise new debt in the U.S. junk-bond market.

He said if the current selloff in the sector continues, investors could see a repeat of December 2018, when the issuance of sub-investment-grade bonds ground to a halt. An extended freeze could become a bigger problem, he said, pointing to junk-rated corporate borrowers that face billions of dollars of maturing debt this year.

“What choice do you have? Do you wait for markets to stabilize, or do you take your chances?” said Michael DePalma, head of quantitative fixed income for MacKay Shields, in an interview, adding that companies were likely to wait out the recent turmoil.

Up until last week, traders were still buying bonds at a brisk pace and issuers weren’t having trouble offloading new debt into the market, even as yields on a widely-tracked basket of high-yield bonds were at 5.88%, near a previous record low of 5.70% set in June 2014, according to Bank of America Merrill Lynch data.

That changed with the rapid spread of the coronavirus beyond China, to Germany and Italy, along with Asian manufacturing powerhouse South Korea, which has led to growing worries that high-yield corporate borrowers could be derailed by the coronavirus, much like equity markets in the past few days.

“Growth is such a key metric for high-yield companies,” Fran Rodilosso, head of fixed income ETF portfolio management at VanEck, told MarketWatch. “Now you’ve got some unforeseen impacts on the global economy, such as a potential global health crisis, that’s weighing on markets.”

Falling bond prices push yields higher, since they move in the opposite direction, and also increase the amount of “spread” or additional compensation that investors demand on bonds over risk-free Treasurys. Spreads jumped 4.17% on junk bonds by the end of trading Tuesday, marking the biggest two-day rise in spreads since the U.K. voted in 2016 to leave the European Union, according to Bloomberg data.

A record rush of cash also has left exchange-traded funds that focus on U.S. high-yield bonds.

“But two things happened,” Bartolini told MarketWatch. “This is a clear de-risking event as a result of growth revisions,” he said. “But I think it’s also a great case study of the added liquidity of what ETFs are able to supply.”

The benchmark SPDR Bloomberg Barclays High Yield Bond ETF JNK, +0.11% saw its highest volume of trades ever on Tuesday, even though shares declined by less than 0.8%, according to FactSet data.

“We see investors turn to ETFs for their liquidity needs,” Bartolini said. “We see that time and time again, across a multi of classes, with high-yield being one of them.”

On Wednesday, U.S. stocks closed mostly lower, with the Dow Jones Industrial Average DJIA, -0.46% and S&P 500 index SPX, -0.38%  both losing about 8% over the span of their five-day losing streaks.

But shares of JNK managed a 0.1% gain Wednesday, which was its second-highest day for trading volume ever, according to FactSet.

“High-yield has been a proxy for equities. It would be a surprise if credit spreads did not widen out with the profound correction in equities,” said Max Gokhman, head of asset association for Pacific Life Fund Advisors, in an interview.

High-yield businesses can be particularly vulnerable to sputtering economic growth or pinched corporate earnings, mainly because their high debt loads and borrowing costs can leave them more vulnerable to defaults.

Here’s a chart of rising defaults in the energy component of high-yield, which has been grappling with the blowback from low crude oil prices: 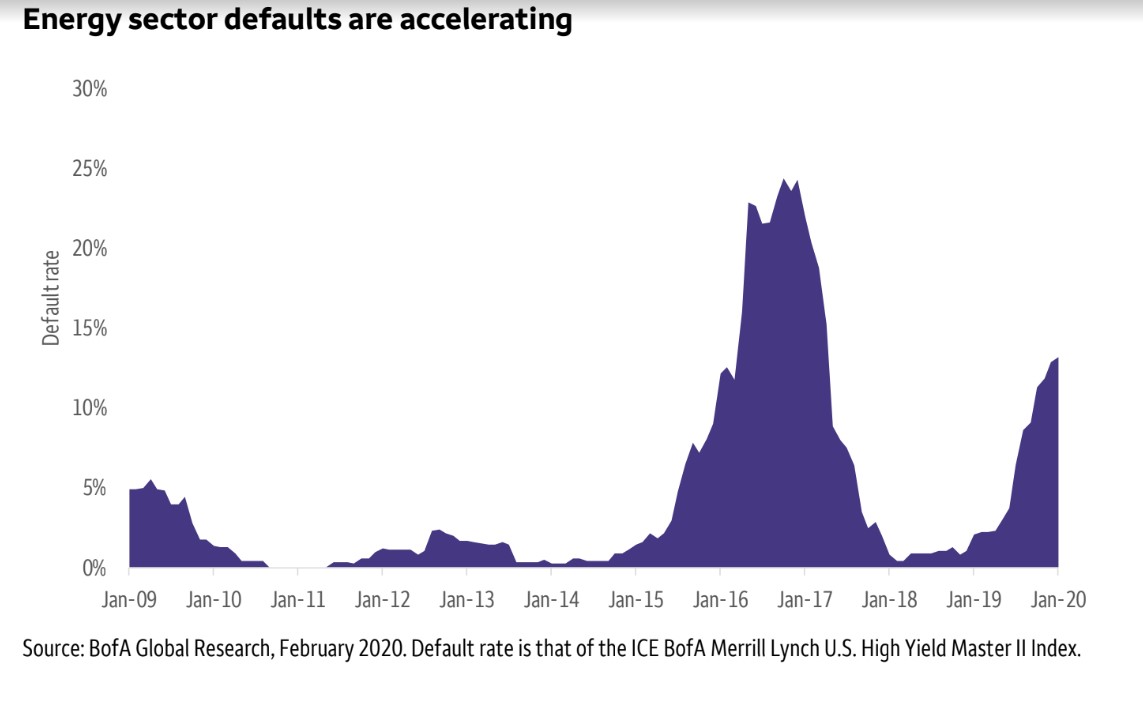 Even so, some investors are adopting a wait-and-see posture until they can gain further clarity on the impact of the virus.

Norris, who was attending JP Morgan’s annual high-yield conference in Miami, said there were no signs of panic yet, and that investors appear ready to put cash to work in the sector.

“Investors who hung in there were always rewarded in the past,” DePalma said, but also warned: “At some point, these people are going to get disappointed.”