The big four banks have welcomed the federal government's plans to axe responsible lending laws which sent bank shares soaring on Friday, but investors are conflicted on whether it will spell good news for the sector's long-term value.

Treasurer Josh Frydenberg announced an overhaul of the National Consumer Credit Act on Friday, proposing changes that will weaken checks and balances and make it easier for consumers to get loans approved.

Westpac chief executive Peter King said the government's initiative would speed up the process for customers to obtain loans, which would help drive the country's economic recovery. 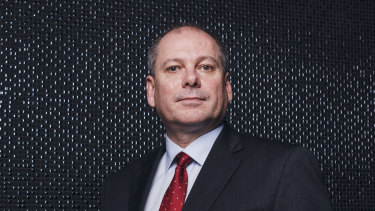 Westpac CEO Peter King said it was in his bank’s best interest only to provide loans to people who can afford them.Credit:James Brickwood

"We will be able to streamline our processes, making it an easier and simpler process for customers. It will also play an important role in ensuring access to credit for businesses wanting to invest and grow," Mr King said.

However, Plato Investment Management's chief executive Don Hamson was not convinced there would be an increase in loan activity as ongoing uncertainty around the coronavirus pandemic had made consumers cautious.

"The issue is there’s a pretty low demand for loans at the moment. It’s a mild positive but I don't think given the fairly insipid demand for loans it will suddenly spur on an increase in activity," Mr Hamson said.

Unemployment remained high and restrictions on migration would hurt property sales, which would further weigh on demand for loans, Mr Hamson said.

"No one really knows how this is going to pan out. People who have jobs may be fine, but I don't think they’re going to stretch themselves," he said. "This thing is not over by any stretch of the imagination."

Mr King said it was in Westpac's best interests to only provide loans to customers who can afford them as the sector grapples with over $274 billion in loan deferrals.

Mr Hamson said the banks had learnt lessons from the royal banking commission and he did not anticipate a rise in predatory lending.

Shares of the big four banks – Westpac, Commonwealth Bank, NAB and ANZ – rose by as much as 7 per cent over the course of Friday trading. But Atlas Funds Management's chief investment officer Hugh Dive said he thought the rally was "a bit overdone".

"The banks are worried about bad debts," Mr Dive said. "I don't think this suddenly opens up the floodgates of lending."

Mr Dive said the relaxed regulation would reduce compliance costs for banks, which would improve valuations, but investors would keep an eagle eye on the credit quality of the banks' loan books.

Similarly, IML's senior portfolio manager Hugh Giddy said the rally was likely being driven by hedge funds and short sellers, and he cast doubt over the long-term valuation of bank stocks.

"It’s been welcomed by the bank shares but will it change their fundamentals? I’m not sure."

"We're in a false state with unemployment which will almost certainly rise when JobSeeker and JobKeeper [wage subsidy payments end]," Mr Giddy said.

Mr Giddy said he thought the relaxation of responsible lending laws was the government's attempt to keep property prices stable rather than reduce compliance costs for banks.

"And that shouldn't be government policy," Mr Giddy said. "They should not be targeting house prices but they seem to think this is part of their job, it's part of their popularity."

Mr Giddy said the Australian economy was dependent on a buoyant property market with revenue from land taxes [and] stamp duty, and the construction industry being a big employer.

"I don't know whether this is targeted at that, or whether banks are saying compliance is over burdensome."

A bank source, who spoke on the condition of anonymity, said the banks had not pressed for the regulation to be eased and were surprised by the announcement.

Crestone Wealth Management's head of equities Todd Hoare said the news was "very, very positive" for the financial sector as the Hayne royal commission had created an "anti-bank" sentiment where responsibility for loan defaults swung too heavily towards the lenders.

"Now we’re moving to a middle ground. Those who borrow must take some responsibility to fund their loans," Mr Hoare said.

Pengana's chief investment officer Rhett Kessler agreed, claiming Australia had become a "nanny state" in terms of regulation over the past two years and now the pendulum had swung back. He predicted the regulatory change would trigger long-term growth in the industry.

"When you free up any organisation to do what their core competencies are, without additional regulatory impost, it should reduce the cost of doing business," he said. "I’m not sure why people equate less box ticking with automatically leading to taking on bad loans."

Mortgage broker Alan Hemmings said the original purpose of responsible lending laws had been lost as banks and brokers were increasingly forced to apply a "forensic level of analysis" when assessing loans.

"Having a conversation with a customer on their $40 Kayo bill each month was not the intention of the legislation," he said. "It was for lenders to satisfy themselves that the customer can satisfy the loan."

The level to which banks should scrutinise living expenses when assessing loan applications was debated a landmark case launched last year by the Australian Securities and Investment Council. The corporate regulator lost the case after Justice Nye Perram found consumers could change spending habits after being approved for a loan.

"If you take out a mortgage, you tend to change your lifestyle," Mr Hemmings said. "This is where we will start to see some change."