Eight months after giant US investment bank Jefferies opened its cheque book to mount an audacious staff raid on broker CLSA, the firm has this month fully opened its doors.

Its mission: To be a disrupter to Australia's arguably already overpopulated investment banking and broking industry.

Under the stewardship of ex-CLSA executives – investment bank rainmaker and Australian chief Michael Stock and Andrew Norman, who heads up the local equities division – Jefferies will test the appetite for a new firm in the market. One with a slightly different DNA, facing an industry already under pressure. 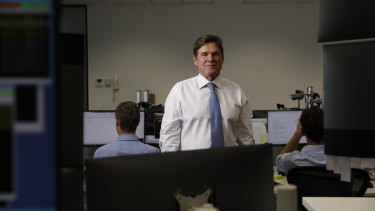 Andrew Norman, head of equities at Jefferies Australia, says its equities line-up is almost complete after hiring 80 people across the Asia region.Credit:Dominic Lorrimer

Having last week ticked off all approvals needed for trading, the financial house offering services from equity sales and research to investment banking will be the first new firm to join the Australian landscape in nine years.

While other international firms have been trimming costs, cutting bonuses and paring back operations, Jefferies is taking a counter-cyclical approach.

But risky though this strategy may be, it has precedent, Norman says.

“In 2000 when tech wreck [hit the market], Macquarie was the 12th ranked broker. Management made a decision they called ‘investing in the downturn’," he says. "As the markets went to crap and people were laying off all over the place, Macquarie stepped up and recruited, and after a couple of years they were top three.’

'Investing in the downturn'

For its part, Jefferies is opening its doors in the midst of the coronavirus epidemic. To date, investors have remained relatively calm, but it could get worse if the spread of the disease or the market’s estimates of its containment prove to be too optimistic. 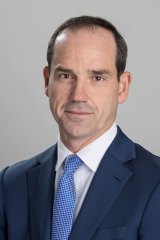 Jefferies’ plan to storm the Australian market received its big break early last year when it identified a schism between CLSA’s China parent and its staff in other territories, including Australia. After the Chinese company began to take a more hands-on management role and cut bonuses for local bankers, Jefferies pounced. It recruited 30 staff in one day.

The pullback of Deutsche Bank from the Australian market late last year could have been a bad omen or an opportunity for Jefferies. It saw it as the latter. Jefferies opportunistically drafted six experienced hires from Deutsche, including equity capital markets bankers Peter Molesworth and Kyra Hannaford.

And although Norman points to a few more holes, its equities line-up is now mostly complete, having hired 80 people across the Asia region.

The newcomer will also be looking to pick up some of the estimated 8 per cent market share that Deutsche accounted for in the broking business.

‘We were doing 6 per cent at CLSA," Norman says, referring to his former employer's market share. "If we can replicate that, we can be very profitable."

Despite the challenging industry dynamics, Norman says starting with a clean slate has its advantages – particularly when it comes to costs and the absence of legacy structures.

We are not a commercial bank and don’t take customer deposits, so the regulatory environment is quite different for Jefferies as opposed to firms like Citi or JP Morgan.

"We are not a commercial bank and don’t take customer deposits, so the regulatory environment is quite different for Jefferies as opposed to firms like Citi or JP Morgan," he says. "That allows the firm to be a lot more entrepreneurial and not suffer under the same compliance regime.’

It also allows its research to be more independent, giving "analysts more freedom in what they can and can’t say."

Structurally, Jefferies has been set up differently to some of its peers who often have contrasting reporting lines to their parent firms. Norman points to Merrill Lynch, where research analysts don’t report to the Australian head of equities, but to the head office research in the US.

The idea behind Jefferies' more regionally autonomous model is that decision-making is faster and accountability enhanced. When Jefferies picked up Deutsche Bank head trader David Summerfield, the approval process for the new hire was completed overnight, without a series of interviews with various layers of the organisation.

Another point of difference between Jefferies in Australia and its competitors is the average age of its staff, particularly when it comes to dealers and analysts, Norman says.

"If you look across the staff the average age here would be 10 years older than our competitors," he says. "They (Jefferies) are investing in seasoned experienced analysts and sales guys with the belief that those relationships are incredibly important."

Norman argues that firms that have "juniorised" their staff are suffering as a result.

And it’s that clean sheet of paper when it comes to costs that allows Jefferies in Australia to be more pay generous with its salaries, he says.

Biggest Utility Bankruptcy in U.S. History Is Nearing an End